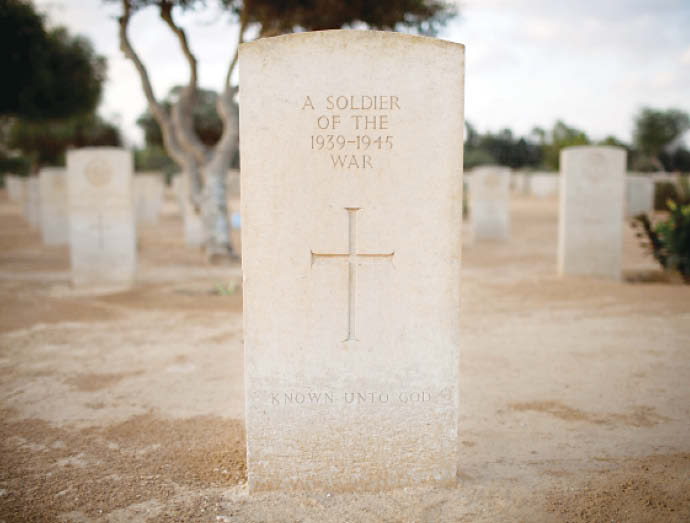 EL-ALAMEIN — World War II veterans, joined by family and well-wishers, gathered Saturday at the Commonwealth War Graves Cemetery in El-Alamein to mark the 70th anniversary of the landmark battle there.

With the majority of veterans over the age of 90, it is likely that this could be the last major anniversary attended by the men and women who fought and saw their friends die here.

The day began with an Australian commemorative service at the country’s own 9th Division Memorial, a stone cenotaph that lies slightly uphill from the main gravesite. Of the 7,000 burials at El-Alamein, 1,234 of them are Australians.

The 9th Division was originally tasked with defending Syria and Lebanon, but, with an attack in the Levant deemed unlikely, they were advanced into Egypt. Their contribution to the Battle of El-Alamein is held in high regard, notably recognized by Lieutenant General Bernard Montgomery, who stated that they “could not have won the battle in 12 days without the magnificent 9th Australian Division.”

However, the veterans look back on their contributions more modestly.

“Everybody talks about the 9th Division,” Edward Gordon Carter, known as Ted, said. “But after signing up and doing 12 months training, we were just were sent where we were told.”

Carter, who is 93 and from Tamworth, New South Wales, ended up in El-Alamein and fought there for six months. He recalled the scorching heat of the desert with only a sheet for shade and keeping the flies at bay, before gathering for a photo below the cenotaph with the 20 other veterans that helped defeat the Germans in North Africa in 1942.

An international ceremony organized by the Brtish government followed, introduced by Reverend Mike Parker from All Saints’ Cathedral Cairo. Dignitaries in attendance included Gianfranco Fini, president of the Italian chamber of deputies, and Colonel Engelbert Theisen, the German defense attache.

Reverend Parker reminded everyone of the 44,000 casualties at El-Alamein, but concluded, “Together we celebrate all that has been achieved since those days through cooperation with peoples across the world, especially our reconciliation and friendship with former enemies.”

Separate national ceremonies were held at the site for Indian, South African and French soldiers. At the Italian and German cemeteries further down the Mediterranean coastline, more than 5,000 and 4,000 soldiers who died fighting for North Africa were remembered respectively.

In early 1942, the fight for North Africa had swung in favor of German Field Marshal Erwin Rommel, whose Panzer Army Afrika was heading ever deeper into Egypt. Counter-offensive attempts by the British 8th Army in July were unsuccessful; however, huge reinforcements lured Rommel into a failed early offensive.

By October, Montgomery had readied more than 200,000 men and a thousand tanks to challenge Rommel’s Panzer Army, which numbered half that of the 8th Army.

The Battle of El-Alamein was a pivotal moment for the Allies during World War II. The defeat scuppered the Axis powers’ intentions to occupy Egypt, the Suez Canal and the valuable oil fields of the wider Middle East.

“This is not the end,” he said, “it is not even the beginning of the end. But it is, perhaps, the end of the beginning.”

As the ceremony drew to a close, a South African military piper played the bagpipes while veterans and their families laid wreaths or walked among the graves, paying what could be their final respects at the desert resting place of fallen friends.

All photos by Robert Stothard