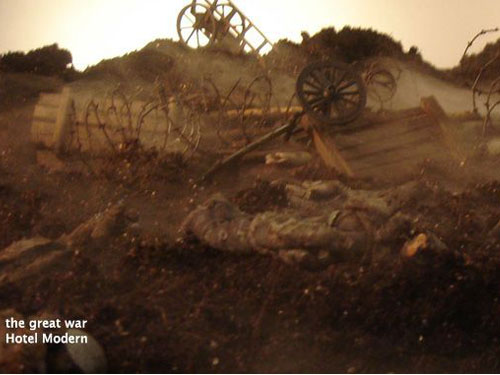 As part of the Downtown Contemporary Arts Festival (D-CAF), Dutch theater company Hotel Modern, along with composer Arthur Sauer, gave their first performance of “The Great War” in the Arab world on Tuesday night at the AUC Falaki Theater.

“The Great War,” a miniature film set installed and projected live on stage, is absolute perfection; one of the best plays I have seen in years.

The one-hour show starts with what appears to be a friendly gathering between old war veterans, then performers Pauline Kalker and Herman Helle take us back to the beginning of World War I. As audiences, we witness the entire making of the war.

The vivid projections of the gory battles fields, scattered limbs, rotting corpses and burning trees are merely the clever manipulation by Hotel Modern of sawdust, potting soil, rusty nails and parsley. “The soldiers are made of wires and cloth,” the talented performer Arlène Hoornweg told Egypt Independent.

The experience is overwhelming. It is like instantaneously watching a movie production on stage with material from a backyard. It is grand.

The play is told through the words of a soldier who writes to his mother from the Western Front. The journey is intense and the deep and moving voiceover forcefully takes the audience from a light stroll along the front into a heartless and bloody battle happening all inside a box of soil and sand. All the images taken during the performance are projected live using a mixer.

In “The Great War” everything is put to good use, from the padded wire soldiers to the high tech mini cameras, projector and mixer. The sound of Sauer’s own breath is even magnified using a microphone to become crude winds and screams of hungry vultures hovering over the decaying cadavers of soldiers. The end result is an onstage soundtrack produced simultaneously with the picture.

The 15-year old Hotel Modern Company has been touring the world for the last decade with a play that every single audience member can relate to in some way or another. The topic of WWI is big and offers an array of possible snippets; battlefields ooze with imagery, machines, colors, people and emotion which make this ingenious production a success on all levels.

On many occasions, audience members lose the sense between a parsley leaf and a burning tree, the bottom of a mop and a thick bush, a tiny iron soldier and an aching human bleeding to death. You lose all sense of what is real and what is miniature. Bit by bit the hand that is moving the soldier and the wire holding a flying bird gradually fade and the reality and pain of war sink in.

Creativity drives each move or sound performed on the stage of “The Great War.” The performers’ ability to project reality onto their audience is imposing and in many cases heartbreaking. Lighting is the big performer among all with its magical ability to trick and transform a small fish tank into a vast sea and to differentiate day from night, sun from moon, land from sea and dirt from mud. The live soundtrack is also moving and gives a sense of depth and reality. Sauer succeeds in even duplicating the noise of a pair of shoes sinking in mud.

At the end of a glorious performance, the audience is invited to come on stage and inspect the material used during the show closely.

You can catch the last night of the performance on 17 April at 8pm at the AUC Falaki Theater: 24 Falaki Street, off Mahmoud Basiony Street, downtown, Cairo.