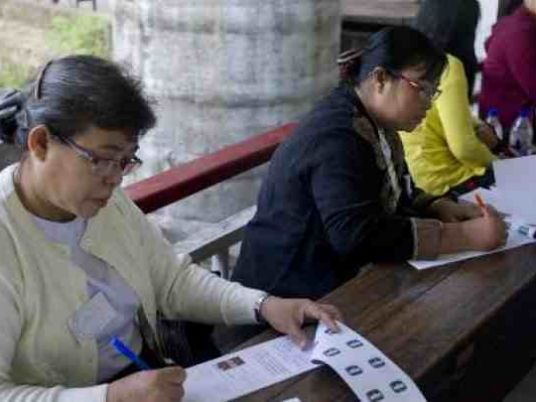 Residents of Myanmar's commercial hub Yangon went to the polls Saturday for the first municipal elections in six decades, with voters hoping for change as the city booms, despite knowing little about the candidates or their policies.

The election will be closely watched as a test of the country's democratic credentials ahead of a landmark nationwide poll slated for November next year.

For many the ballot for the Yangon City Development Committee is the first chance to vote under the country's quasi-civilian government, which replaced outright military rule in 2011.

It is also a rare opportunity to have a say over the future of Myanmar's biggest city, where residents grumble about runaway construction and soaring rents, worsening traffic, poor sanitation and weak pollution control.

"It's very difficult to have big expectations as this is the first YCDC election for 60 years," Khin Maung Tun, 50, a resident in Thaketa township told AFP. "But we came here to vote and show our spirit."

But curbs on who can vote have enfranchised just 400,000 of the city's several million residents, while other clauses have strictly controlled who can stand for the YCDC.

Just under 300 candidates, among them businessmen, retired civil servants and activists, are competing for 115 positions on the committee — although the top posts will remain largely appointed.

Campaigns were muted — or non-existent — in a country where politicians are unused to wooing the electorate, although election officials were on hand to help with the queries over ballot sheets available at polling stations across Yangon early Saturday.

Despite the lack of intimacy with the candidates' politics, many residents appeared determined to vote after years of repressed democratic aspirations under junta rule.

"I do not know anything about candidates. I just found out their names while voting," Phone Maw Lynn, a resident in Sanchaung township told AFP after voting.

"I hope for some significant change by voting," he said without revealing who he voted for.

Polling officials said the election — which ends before dusk — will be free and fair, in a break from the junta years.

"We will count the votes in front of witnesses sent by candidates. If the voters also want to come and see, they can do so," Tin Soe, a polling monitoring official in Sanchaung township told AFP.

The polls are only the second major vote since the 2010 general elections, which were marred by widespread accusations of cheating and the absence of Aung San Suu Kyi's opposition party which boycotted the election.

By-elections in 2012 held in a handful of constituencies across the country were considered much freer and allowed the veteran democracy campaigner Suu Kyi to enter parliament for the first time.

But she remains barred from running for president under the current constitution, although her National League for Democracy party is pressing hard for an amendment.

The NLD is expected to sweep next year's poll, following up on its 2012 success.

But critics say the Yangon poll is deeply flawed, citing the rule of just one person per household allowed to vote — meaning only around 400,000 people can cast a ballot — narrow age restrictions for candidates and a ban on political parties from taking part.

Appointed figures will still outnumber elected ones on the city's top council within the YCDC, which has major responsibilities over infrastructure, heritage and tax collection in Yangon.

But it marks a major step by the body, which has not been chosen by popular ballot since 1949.