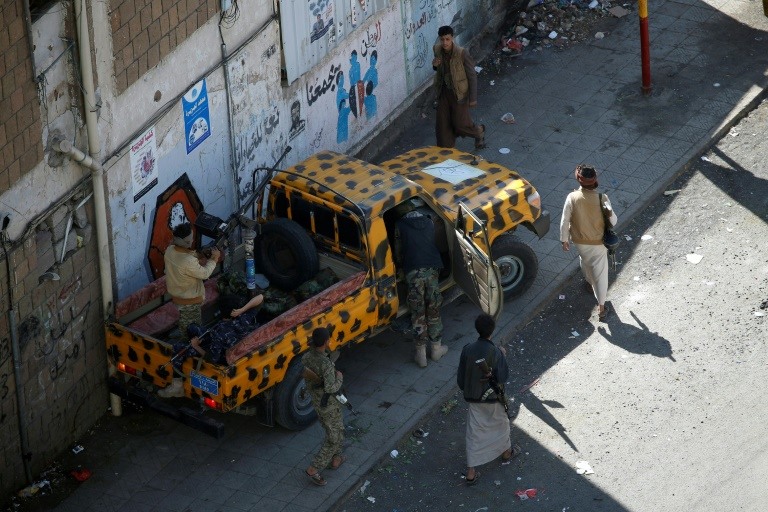 Gun battles forced shops and schools to close in Yemen’s capital on Sunday as residents warned a three-year rebel alliance was collapsing into a “street war” which has left dozens dead in the city.

The Iran-backed Houthi rebels’ partnership with powerful ex-president Ali Abdullah Saleh fell apart after he reached out to a Saudi-led coalition fighting the insurgents.

Referring to the ongoing humanitarian crisis in the war-ravaged country, UN Secretary-General Antonio Guterres on Sunday reiterated calls for a ceasefire in Yemen, where he is “deeply concerned about the sharp escalation of armed clashes” over the past several days, his spokesman said.

The Houthis’ political office on Saturday accused Saleh of staging a “coup” against “an alliance he never believed in”.

On Sunday, Saleh loyalists cut off a number of streets in central Sanaa and deployed heavily in anticipation of Houthi attacks, as security sources said clashes this week had killed about 60 people across the capital and at its international airport.

Saleh loyalists renewed a bid to seize control of Al-Jarraf district, a stronghold of the Houthis who fortified their positions with dozens of vehicles mounted with machine guns, witnesses said.

They said the Houthis had brought reinforcements from their northern strongholds to south Sanaa.

The Houthis seized the home of rebel interior minister Mohammed Abdullah al-Waqsi, who is close to Saleh, killing three of his bodyguards and detaining others, Saleh sources said.

And Houthi rebels killed Mohammed al-Zarka, a tribal leader close to Saleh, in Omran just north of the capital and members of his family, the same sources said.

Sanaa residents said they had barricaded themselves in their homes to avoid snipers and shelling as clashes flared around key ministries where the two sides had been working together just days before.

The education ministry cancelled classes Sunday, normally the start of the school week, and witnesses said some bodies from previous clashes were still in the streets.

Iyad al-Othmani, 33, said he had not left his house for three days because of the fighting.

Mohammed Abdullah, a private sector employee, said his street had been cut off by militiamen and he was staying home.

“Sanaa is becoming like a ghost town. There is a street war and people are holed up in their houses,” said an activist who works with the International Organization for Migration.

Three years after they joined forces to drive President Abedrabbo Mansour Hadi’s government from Sanaa, the collapse of the Houthi-Saleh alliance is a key shift in Yemen’s complex war.

Saleh ruled Yemen as president for 33 years after the 1990 unification of north and south Yemen.

A long-time ally of Saudi Arabia, he waged six separate wars against the Houthis, Zaidi Shiites from northern Yemen.

Saleh resigned under popular and political pressure in 2012, ceding power to his then-vice president Hadi, who now lives in exile in Saudi Arabia.

In 2014, Saleh joined forces with the Houthis, seizing the capital and setting up a parallel government as Hadi’s administration fled Sanaa.

That triggered a Saudi-led Arab force to intervene to prop up Hadi’s government, an escalation in a war that has since killed more than 8,750 people and dragged Yemen towards what the UN calls the world’s worst humanitarian crisis.

On Saturday, Saleh reached out to the Saudi-led coalition, offering to “turn the page” if it lifts a crippling blockade on the country.

The Houthis accused him of treason.

Yemen’s conflict has been a key focus of tensions between Sunni-ruled Saudi Arabia and Iran, the predominant Shiite power.

Iran voiced regret Sunday about the rebel infighting and called for “calm and restraint”.

Foreign ministry spokesman Bahram Ghassemi expressed hope that all sides would maintain a united front against foreign “aggression”, in reference to Iran’s regional arch-rival Saudi Arabia and its allies.

The Saudi-led coalition carried out dawn air raids Sunday against Houthi positions in the hills south of Sanaa but it was unclear if the strikes were meant to benefit Saleh’s forces.

A coalition spokesman could not immediately be reached for comment.

The United Arab Emirates, which is a key member of the coalition, on Sunday denied a Houthi claim that a missile fired from Yemen reached its airspace or threatened a nuclear power plant set to open in 2018.

The Houthis had earlier claimed on their Al-Masirah news channel that they had hit the Barakah plant with a cruise missile fired from Yemen.

A missile fired by the Houthis which was intercepted by near Riyadh’s international airport last month prompted the coalition to tighten a blockade against Sanaa airport and rebel-held sea ports.

The Houthis have warned that Saudi Arabia and its allies will “pay a heavy price in their own capitals” for Saleh’s “great treason”.