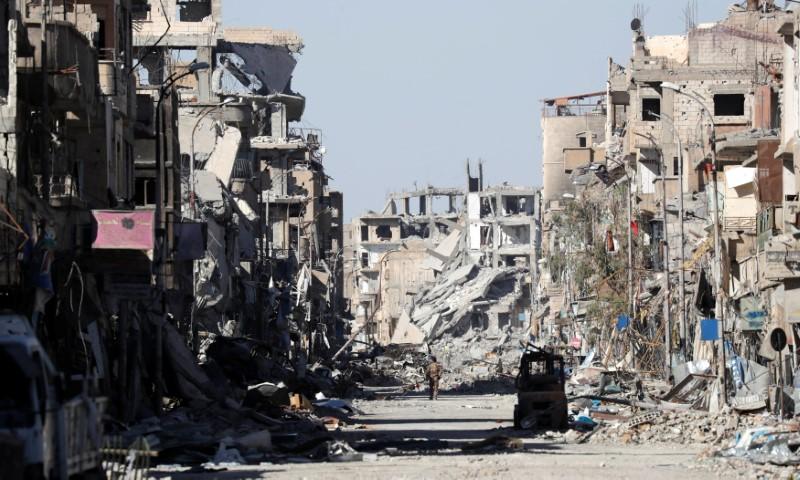 Fighters with the Syrian Kurdish YPG militia have credited Kurdish leader Abdullah Ocalan with their victory over Islamic State in Raqqa, in apparent response to US criticism of their praise of a man jailed in Turkey for treason.

In a video praising Ocalan’s “ideological power”, the YPG fighters rebuffed US criticism of battle celebrations in Raqqa last week where the YPG’s all-female affiliate, the YPJ, unfurled a banner with his face on it.

The banner has become a new focal point for Turkey’s anger over US support for the YPG, which Ankara sees as an extension of Ocalan’s outlawed Kurdistan Workers’ Party (PKK).

Deeply concerned by the rise of Kurdish power in northern Syria, Turkey has opposed the US alliance with the YPG which spearheaded the Raqqa campaign under the banner of the multi-ethnic Syrian Democratic Forces (SDF).

On Saturday, the US embassy in Turkey issued a statement reiterating its misgivings about Ocalan, in an apparent response to criticism from the Turkish government over the banner.

“The PKK is listed among foreign terror organizations. Ocalan has been jailed in Turkey for his actions related to the PKK. He is not a person to be respected,” it said.

In the video circulated by the YPG press office on Sunday, seven fighters credit Ocalan’s ideology for the defeat of Islamic State at Raqqa, which served as the jihadists’ Syrian base of operations and a hub for planning attacks in the West.

“All victories, developments and gains made here are results of a great battle based on his opinions and philosophy. If his ideological power hadn’t been with us, we wouldn’t know what to do in such a situation,” said one of the fighters.

“Raqqa would never have been rescued from the darkness of recent years, and all other IS occupied cities as well.”

Ocalan’s influence runs deep in Kurdish-led regions that have emerged in northern Syria since its civil war began in 2011. Steps are under way to establish a new political system based on his ideas about federalism and local democracy.

Another of the fighters, who identified himself as a Canadian and gave his name as Hozan Kobane, said the US government position on Ocalan was “a mistake” and “a bit behind the times”.

“The writings and the philosophy and the influence of Abdullah Ocalan was very, very decisive in motivating the soldiers with an ideology of peace and democracy that allowed this liberation to be possible,” he said.

The US-led coalition has said the Ocalan banner was not sanctioned by the SDF leadership. “Furthermore, the Coalition does not approve of the display of divisive symbols and imagery at a time in which we remain focused on the defeat of Daesh (IS) in Syria,” Colonel Ryan Dillon, the coalition spokesman, said.

Ocalan has been in jail in Turkey since 1999 on a treason conviction. More than 40,000 people, most of them Kurds, have died in the fighting since the PKK took up arms against the state in 1984.

The PKK is considered a terrorist organization by the United States, Turkey and the European Union.

Foreigners who joined IS faced almost certain death in Raqqa