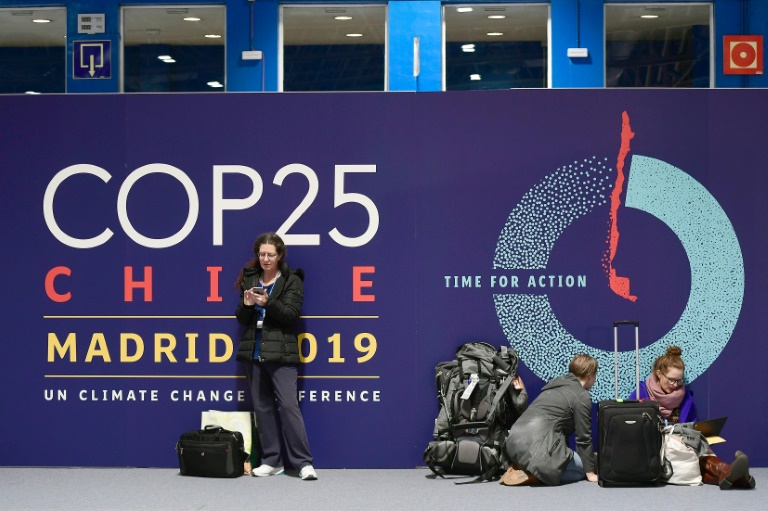 Global talks tasked with neutralizing the threat of global warming get underway in Madrid Monday, but their narrow focus on rules and procedures remains out of sync with the world’s climate-addled future.

Mindful of this gap, UN chief Antonio Guterres warned on Sunday that a “point-of-no-return” in the climate crisis is “in sight and hurtling towards us.”

Indeed, three decades after NASA scientist James Hansen made headlines by telling the US Congress global warming had begun, evidence of its dire impacts is so overwhelming that “climate denier” is synonymous with insisting the Earth is flat.

He didn’t name names, but he didn’t have to.

“Some countries like China and Japan are signalling their unwillingness to increase ambition,” said Laurence Tubiana, CEO of the European Climate Foundation and, as a former negotiator for France, a main architect of the Paris Agreement.

Nor have India, Russia or Brazil expressed any enthusiasm for ratcheting up carbon-cutting pledges submitted under the 2015 treaty.

Donald Trump has taken things a step further by yanking the US out of the Paris deal entirely.

But even if all the world’s nations honored their pledges, the planet would still heat up at least three degrees Celsius above preindustrial levels, a sure-fire recipe for calamity, scientists say.

Nations have agreed to cap warming — already up by one degree Celsius — at “well below” 2C.

Beyond the 2C threshold, “we are at risk of unleashing self-reinforced warming,” Johan Rockstrom, director of the Potsdam Institute for Climate Impact Research, told AFP.

“This is what Earth system scientists fear most.”

The talks in Madrid — the 25th “COP”, or conference of the parties, in as many years — will focus on finalizing rules for global carbon markets, and setting up a fund to help countries already reeling from climate-enhanced heatwaves, droughts, floods and storms made worse by rising seas.

– Elephant in the room –

Poor and vulnerable nations are set to receive $100 billion annually from next year to prepare for future impacts, but no concrete provisions exist yet for “loss and damage” already incurred.

Frontline negotiators here describe COP25 as “technical talks” setting the stage for next year’s meeting in Glasgow, where countries must confront the yawning gap between the Paris targets and current emissions.

But events outside the conference hall in Madrid may change the agenda.

“A key question will be to what extent the growing social movements throughout the world will be factored into decisions of the COP 25,” said Tubiana.

Alden Meyer, director of strategy and policy at the Union of Concerned Scientists, agreed.

“How to address the inadequate political response is the elephant in the room,” he told AFP.

Under the European Commission’s new president Ursula von der Leyen, Europe has emerged as a key player in pushing for a more rapid drawdown of carbon pollution.

Nearly a decade ago, the European Union engineered 2015 as the deadline for a climate deal. But the bloc ceded much of its leadership after that role to China and the United States under Barack Obama.

Today it may once again finds itself thrust onto the center stage.

“The EU Commission is the new political element,” Tubiana said. “The EU will clearly signal its intention to increase ambition by 2030 and achieve net-zero by 2050.”

For the world’s most vulnerable nations, that kind of action can’t come soon enough.

“Anything short of a vastly greater commitment to emission reduction through new national plans … will signal a willingness to accept catastrophe,” said Lois Young, an ambassador from Belize and chair of the Association of Small Island States (AOSIS).

Image: AFP / CRISTINA QUICLER Three decades after NASA scientist James Hansen made headlines by telling the US Congress global warming had begun, evidence of its dire impacts is so overwhelming that “climate denier” is synonymous with insisting the Earth is flat

UN chief warns of ‘point of no return’ on climate change