PRISTINA, Kosovo (AP) — Kosovo authorities announced Saturday they have brought back from Syria 110 Kosovar citizens, mostly women and children, with the assistance of the United States.

Justice Minister Abelard Tahiri, top policeman Rashit Qalaj and a health official told journalists early Saturday that “a planned operation to bring back some of our citizens from Syria ended successfully,” bringing back four alleged fighters with the Islamic State group, 32 women and 74 children, without giving more details “due to the sensitivity of the case.”

Nine children had lost parents during the fighting in Syria.

The group has been taken to a center in Vranidoll, 10 kilometers (6 miles) from the capital Pristina, to be taken care of before being sent to homes in the next 72 hours.

Three children were seen playing football inside the shelter, well-protected by a special police force surrounding its perimeter.

The four suspected fighters were arrested.

Tahiri said a task force was created in October in close cooperation with the United States.

“Our message is clear: The Kosovo government will strongly continue to prevent and fight violent extremism and terrorism,” he said.

The U.S. Embassy in Pristina commended Kosovo’s move for setting “an important example” and applauded its “compassion in accepting the return of this large number of civilians.”

“The United States remains grateful to the Syrian Democratic Forces for their support in the repatriation and for continuing to humanely detain hundreds more ISIS fighters from dozens of countries,” it added.

The minister considered the women and children to be “innocent victims,” adding that the authorities had plans to rehabilitate and reintegrate them into society.

More than 400 Kosovars initially joined extremist groups in Syria and Iraq, but none has left in the past three years, according to Kosovo authorities.

Qalaj said that 30 Kosovo citizens are still actively supporting the groups there, and there are also 49 women and eight children.

“We shall not allow our citizens to turn into a threat to the Western world and will take all to ensure that those accountable face the law,” Tahiri said, adding that “there is no amnesty for any person, be it a woman or a man, who has committed an extremist or terror act.”

By FLORENT BAJRAMI and LLAZAR SEMINI

Photo: A group of children walk inside a detention center where authorities have brought back from Syria 110 Kosovar citizens, mostly women and children in the village of Vranidol on Sunday, April 20, 2019. Four suspected fighters have been arrested, but other returnees will be cared for, before being sent to homes over the coming days, according to Justice Minister Abelard Tahiri.(AP Photo/Visar Kryeziu) 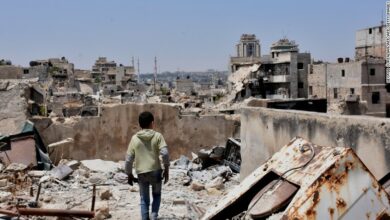 Denmark opens its arms to Ukrainians, while trying to send Syrian refugees home