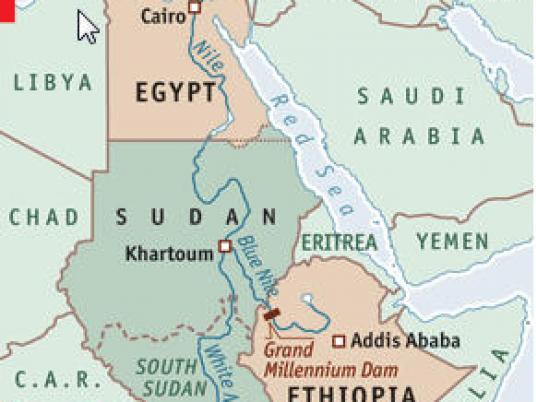 The Ministry of Water Resources and Irrigation has officially turned down a project to connect the Nile and the Congo rivers.
The ministry sent a technical report to President Abdel Fattah al-Sisi and Prime Minister Ibrahim Mehleb stating 22 reasons for refusing the project as follows:
1. The proposed project to transfer 110 billion cubic meters of water per year did not pass through the globally known cycle of projects from the feasibility study stage to the final report.
2. It did not specify how the water would be directed from the Congo River to the stream that will be created. Instead, it only referred to a dam that would be built on the Congo River. Also, it did not provide any hydrological information about the flow of the water at the point of transfer for a sufficient period of time.
3. It did not specify the number and longitudinal and lateral sections of the pipelines, which should be 550 pipes of a 2.0-meter diameter over a length of 600 km.
4. It would need several pumping stations to pump more than 800 cubic meters, including the waste, which would cost a lot.
5. It did not specify the number of pumping stations and their locations.
6. It did not specify the source and amount of electrical power needed for the stations, which would be more than 30,000 MW. This would be a difficult challenge because the electrical power available in Egypt is 24,000 MW.
7. It did not specify the annual cost of the energy needed to run the stations.
8. It did not specify the locations of the 18 proposed dams that would generate the hydroelectric power, their heights or their specifications.
9. It did not provide the longitudinal and lateral sections of the stream in southern Sudan, which should be 1,000 to 1,500 meters with a depth of 5.0 meters over a length of more than 1,600 kilometers until the Egyptian border.
10. It did not provide any information about the intersections of the proposed long waterway with the numerous natural waterways in the area or specify the type of facilities required at those intersections.
11. The proposed route of the waterway in southern Sudan passes through swamps where huge amounts of water are lost. Consequently, any new surface water in this area will be lost too.
12. It did not specify the path of the waterway and its dimensions within the Egyptian border. And as the Nile River cannot absorb any additional quantities of water at the moment, a new river would be created in the Egyptian desert at a huge cost, in addition to pumping stations and many other water facilities.
13. The initial estimated cost of the major works is exorbitant.
14. It did not provide any cadastral studies or tests for the soil to determine the path of the pipelines.
15. It did not compare the cost per cubic meter for transferring water from the Congo River to Egypt with the cost per cubic meter for a desalination of the sea water.
16. It did not specify the source of funding for the project, its financing conditions and its payment method.
17. It did not specify the risk for such a long waterway passing through geographically disparate regions and security unstable tribal areas, which was the case during the implementation of the Jonglei Canal in southern Sudan.
18. It discarded the legal dimension of the proposal, as the Congo River Basin includes several states. And it did not mention that the Congo agrees to withdraw water from its river, or that Sudan and South Sudan approve of the project, especially that the project would not benefit any of these countries.
19. There were proposals to transfer the Congo River water to Lake Chad and to Libya that the Congo had rejected because its Constitution prohibits the transfer of water out of the country without the consent of the people through a referendum.
20. Other countries may request to transfer to them part of the Nile water from Egypt by the same token if the Nile Basin countries agree.
21. We should remember that Egypt and Sudan have for 40 years failed to build the Jonglei Canal over 360 km to pass 4 billion cubic meters of water before we start thinking about transferring 110 billion cubic meters for a distance of more than 3,000 km.
22. It would be more useful to take advantage of the tremendous amount of water that is currently lost by evaporation and transpiration in the swamp area of southern Sudan, especially that there are studies about this since the 1940s that we can benefit from.
Edited translation from Al-Masry Al-Youm