At a time when racial divisions appear more dire and there is no shortage of bad news in America, thousands of music lovers gathered in a moment of unity and celebration in the nation’s capital over the weekend at the fourth annual “All Things Go Fall Classic” music festival. 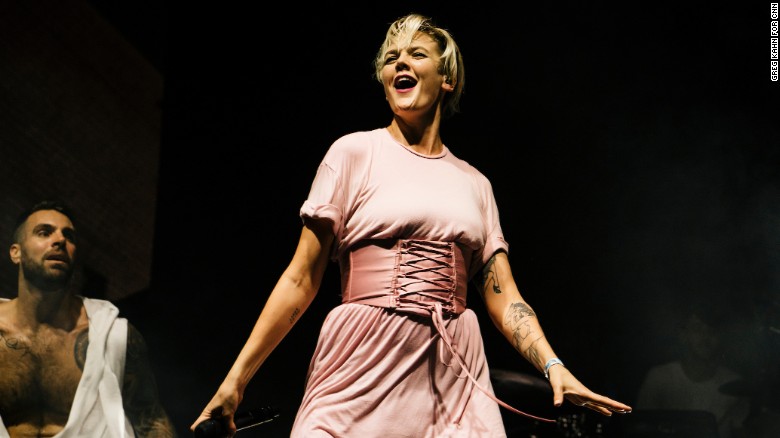 PHOTOS: ‘All Things Go’ music festival
Australian pop star Betty Who performs on day three of the “All Things Go Fall Classic” music festival at Union Market in Washington. The event, held from October 6-8, 2017, draws artists from diverse genres.
“‘All Things Go’ is about connecting music fans through one of a kind live experiences. Our focus is on what’s next in music, collaborating with forward-thinking artists from all backgrounds and genres,” festival co-founder Stephen Vallimarescu told CNN.
In the wake of the Las Vegas massacre that left 58 dead at the Route 91 Harvest Country Music Festival last week, Foster the People decided not to play their most popular song, “Pumped Up Kicks” — a song about a boy named Robert who has dreams of committing a school shooting — at either the Austin City Limits festival or at “All Things Go.”
“Playing something like ‘All Things Go’ this weekend in DC, the festival experience for me has changed a little bit, especially on the heels of Vegas and what just happened over there. That hit us really deeply,” Mark Foster, the band’s lead singer, told CNN. “But, I think that it’s more important than ever to get on stage in that setting and to not be afraid,” he added.
CNN’s #GetPolitical caught up with Foster, Chicago rapper SABA and pop star Betty Who — three musicians who are looking beyond the divide and a news cycle dominated by President Donald Trump to lift up their fans and their communities. 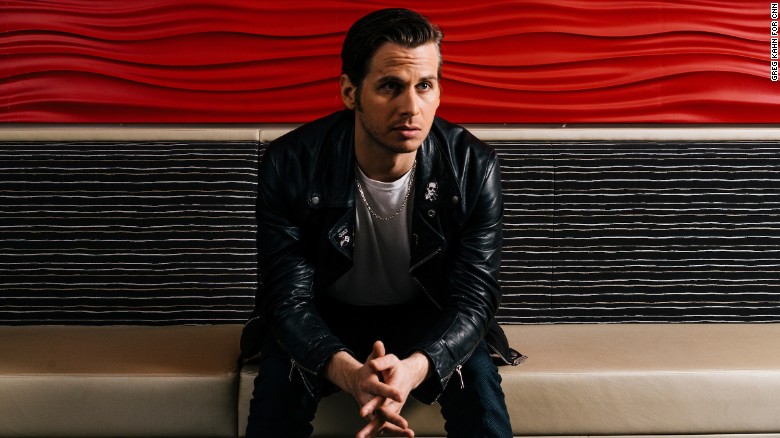 Mark Foster, lead singer of Foster the People, is pictured at the CNN Washington bureau ahead of his performance at the “All Things Go” festival on Oct. 8, 2017.
Foster the People released their latest album, “Sacred Hearts Club” over the summer and Foster said that while watching a tense political situation “rip families apart, rip friends apart and really just divide us,” it was important for the band to make “joyful” music.
“Walking into the studio making ‘Scared Hearts Club,’ it was important for us as artists to write a joyful record, but using joy as a weapon because joy is the best weapon against oppression, it’s the best weapon against depression,” Foster said.
“Going into the studio every day writing a song, I would wake up, I’d read the news in the morning and I would get a knot in my stomach because it felt like there would be a tragedy that happened somewhere in the world, there would be a shooting somewhere, there would be a bombing somewhere,” Foster added.

Foster said that the band’s guitarist Sean Cimino had family members at the Route 91 Harvest Festival who ran to take cover when the shooting took place. The band also had friends who “barely escaped” theterror attack at the Bataclan theatre in Paris in 2015, which killed at least 130 people.
But Foster said that while entertainers are meant to entertain, an artist has a responsibility to connect people and speak out during trying times.
“I think artists throughout the history of time have always been controversial and have been a voice to speak to public culture in a way that a politician can’t because they’ll lose their constituency,” Foster said. “But artists I think historically, have always shined a magnifying glass on culture and talked to it whether it’s helping give people words to sing about or feel something they might not know how to articulate themselves.”

And at a time when concerts around the world have become the target of deadly violence and terror, Foster said that artists should stand strong: “In the words of Tom Petty, ‘I won’t back down,’ … if we don’t let fear stop us from what we’re doing, then we’re winning.” 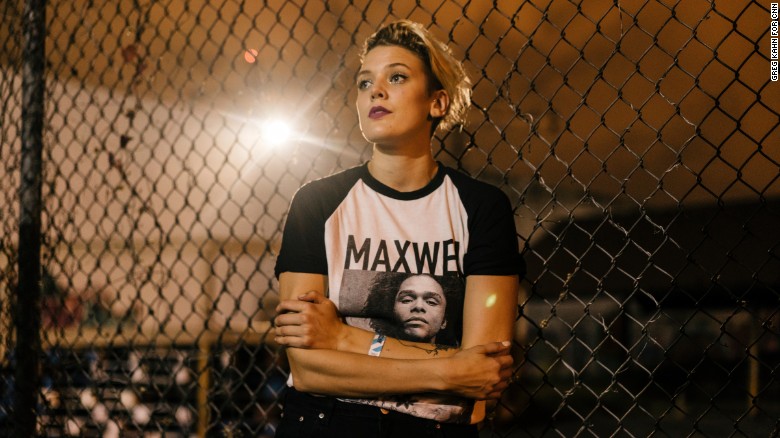 Betty Who is pictured following her performance at the “All Things Go” festival at Union Market in Washington, DC, on Oct. 8, 2017.
Australian pop star Betty Who, whose full name is Jessica Newham, makes music that empowers her fans with messages about self-love and songs that celebrate human connection. Her biggest hits include the upbeat dance jam “Human Touch” and her cover of “I Love You Always Forever” off her 2017 album, “The Valley.”
“More than anything, I feel my biggest responsibility is to stay joyful and present in the face of despair,” Betty told #GetPolitical. “I think a lot of the communities that come to my shows are really affected by what’s going on in the world right now and I think that I would so much rather create an environment where they felt like they could be themselves and where they felt like they could have a really good time even if it is an escape.”

More than anything, I feel my biggest responsibility is to stay joyful and present in the face of despair.

The pop singer, who toured with Katy Perry, said that when she first started to sing her mother told her that eventually, she will have to use her platform for something good and pick a cause. But the 26-year-old did not have to look far to find her calling.
Betty said that she grew up in a community where gay rights were respected and “people married the people they loved because they loved them,” but it wasn’t until she got older that she realized how oppressed many LGBTQ communities are around the world.
She described the first time she performed as Betty Who in New York and her audience was largely a group of 90 gay men and immediately she knew what her message would be. 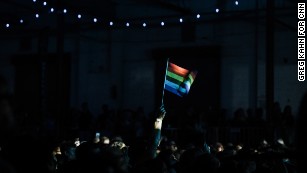 A fan waves a rainbow flag during Betty Who’s performance at the “All Things Go Fall Classic” music festival at Union Market in Washington, DC on Oct. 8, 2017
“I remember playing the first show and saying, ‘this is my cause.’ I don’t have to think about it. I didn’t have to search for it,” Betty said. “I don’t feel like I’m tied to the LGBTQ community, i just feel like they are so many who come to my shows who are a part of that community that I have an opportunity to be a voice for them.”

She added that the more women come to her shows, the more she gets offers to play shows for Planned Parenthood — a mission she is also passionate about.

Betty said that while she feels a “responsibility” to speak out, it never feels like a “burden.” But when she performs, she wants to give her fans a burst of positive energy and a much-needed escape.
“I don’t really want to shove it in their faces when they come to a show, I don’t want to be like we should talk about politics now,” she said. “It’s like no, I want you to come to the show and enjoy it. I want you to forget all the horrible stuff that’s going on. I want you to be able to let loose and have fun especially in trying times like these.”

SABA and the Chicago ‘renaissance’ 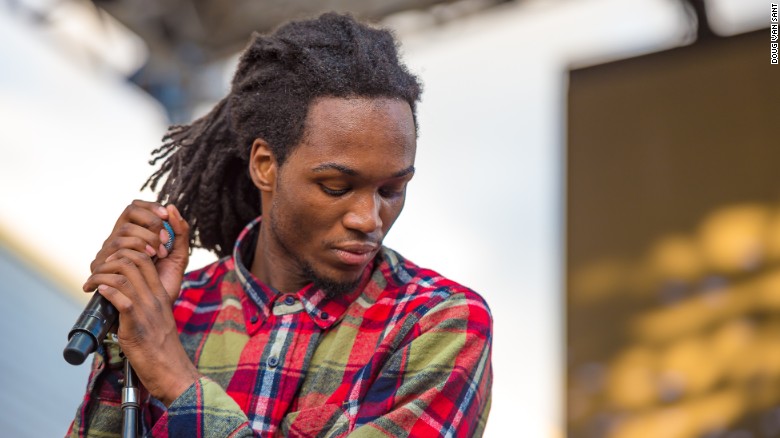 SABA performs at the “All Things Go” festival at Union Market in Washington, DC, on Oct. 7, 2017.
SABA hails from the West Side of Chicago — “the part of the city that they don’t be talkin’ about” — as he raps in “Westside Bound 3,” a song off his latest album, “The Bucket List Project.”
He was featured on Chance the Rapper’s 2013 “Acid Rap” mixtape and the 2016 hit, “Angels.”

Everything in me wants to do do good and give back.

“I have always loved creative writing and I think that’s why I got into open mics because they were poetry based,” he told #GetPolitical. “A lot of the writing that’s on ‘Bucket List Project’ is more so focused on creative writing.”
SABA, whose full name is Tahj Malik Chandler, learned to love music from his father and his work is inspired by two disparate yet equally authentic experiences of Chicago — a city plagued by gun violence and poverty and a city that is bustling with creative energy, art and activism.
His most recent release, “Where Ideas Sing,” was inspired by “the creative renaissance that’s happening in Chicago … just the innovation and me trying to inspire others the way the city inspired me,” he said. 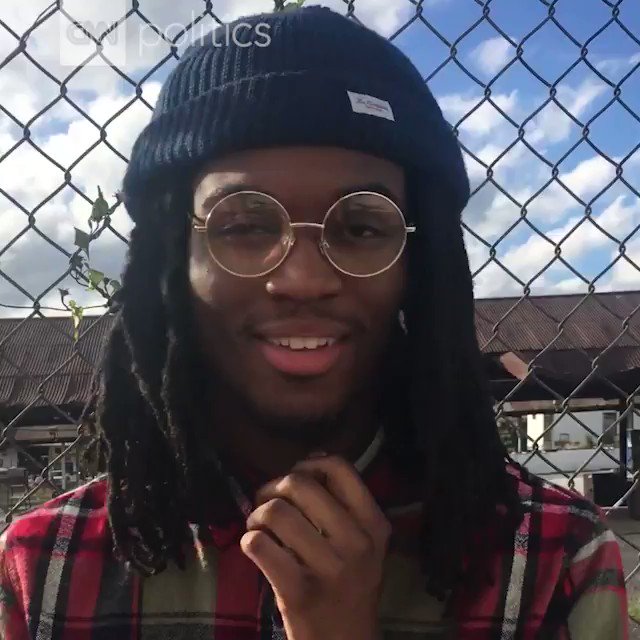 .@sabaPIVOT on how the city of Chicago inspires his music and his latest single, “Where Ideas Sing.” More coming to http://CNN.com

Other songs like “Church/Liquor store,” featuring Noname, touch on the darker side of the city. The song describes SABA’s experience going home on a bus in Chicago and lists exactly what he sees along the way — “funeral home, church, church, liquor store, corner store” -— taking the listener on a stroll through the impoverished streets.
The 23-year-old rapper lost his cousin John Walt in February after he was shot and killed in Chicago and SABA said that his cousin’s death “got me writing way different.”
He is currently working on the longest song he’s written so far, which chronicles his relationship with his cousin, the pain of losing him and how this experience relates to the city of Chicago.
“It started off me rapping about prom because that’s how me and my cousin got cool,” SABA said. “He asked me who I was talking to prom when I was a senior in high school and I didn’t have anybody to take to prom, so he knew some girl and said ‘here, you can take her to prom,’ and after that me and him were like super close. So it starts off super innocent and then it keeps going.”
SABA is starting a foundation in his cousin’s name to help young artists in Chicago pursue their dreams. He said that while you “can’t be mad” at artists who don’t speak out on social issues, “everything in me wants to do do good and give back.”
For more on music, culture and politics, check out #GetPolitical.
Tags
All Things Go Fall Classic" concert Diversity Donald Trump unity