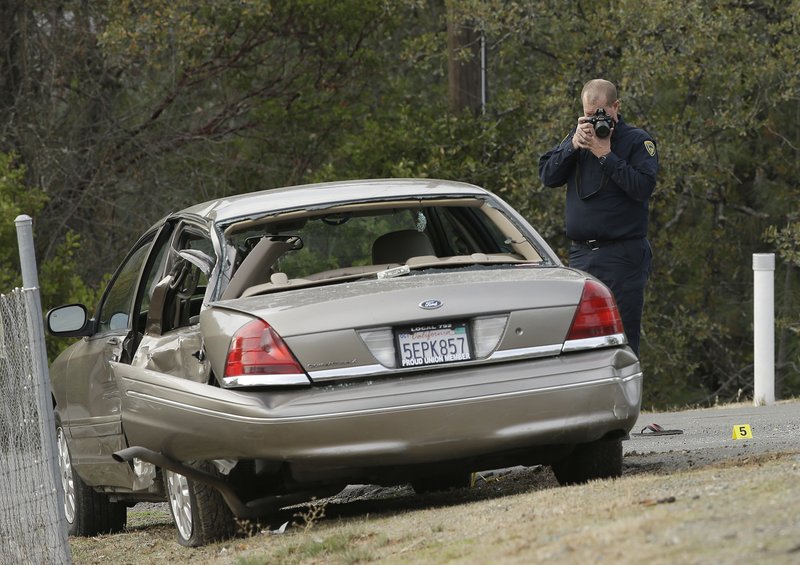 The gunman behind a rampage in Northern California was out on bail for a charge of stabbing a neighbor, had been the object of complaints from neighbors who said he had been firing off hundreds of rounds of ammunition, and had been the subject of a domestic violence call the day before the attack.

Yet Kevin Neal was free and able to use a semiautomatic rifle and two handguns Tuesday to shoot 14 people, killing four, in seven different locations across his rural community, including an elementary school, before he died in a shootout with police.

It’s not yet clear what the terms of Neal’s bail were, and whether he would have been allowed to possess and fire the weapons on his property at the end of a dirt road in Rancho Tehama Reserve. Nor did sheriff’s officials give details on the domestic violence call.

But his many contacts with authorities raised questions of why he was out of custody and able to go on the 45-minute rampage that began with the killing of two neighbors in an apparent act of revenge before he went looking for random victims.

Cristal Caravez and her father live across a ravine from the roadway where the gunman and his first victims lived.

She said they and others heard constant gunfire from the area of the gunman’s house, but couldn’t say for sure it was him firing.

“You could hear the yelling. He’d go off the hinges,” she said. The shooting, “it would be during the day, during the night, I mean, it didn’t matter.”

“The sheriff wouldn’t do anything about it,” said Juan Caravez.

The gunman’s sister, Sheridan Orr, said her brother had struggled with mental illness throughout his life and at times had a violent temper.

She said Neal had “no business” owning firearms.

Tehama County Assistant Sheriff Phil Johnston said the shooter was facing charges of assaulting one of the feuding neighbors in January and that she had a restraining order against him.

Johnston declined to identify the shooter until his relatives were notified, but he confirmed the gunman was charged with assault in January and had a restraining order placed against him. The district attorney, Gregg Cohen, told the Sacramento Bee he is prosecuting a man named Kevin Neal in that case.

Neal’s mother told The Associated Press her son, who was a marijuana grower, was in a long-running dispute with neighbors he believed were cooking methamphetamine.

The mother, who spoke on condition she be named only as Anne, lives in Raleigh, North Carolina, where she raised Neal. She said she posted his $160,000 bail and spent $10,000 on a lawyer after he was arrested in January for stabbing a neighbor. Neal’s mother said the neighbor was slightly cut after Neal grabbed a steak knife out of the hand of the neighbor who was threatening him with it.

She wept as she told The Associated Press she spoke to Neal on the phone on Monday.

“Mom it’s all over now,” she said he told her. “I have done everything I could do and I am fighting against everyone who lives in this area.”

She said Neal apologized to her during their brief conversation, she thought for all the money she had spent on him, saying he was “on a cliff” and the people around him were trying to “execute” him.

“I think the motive of getting even with his neighbors and when it went that far — he just went on a rampage,” Johnston said.

Police said surveillance video shows the shooter unsuccessfully trying to enter a nearby elementary school after quick-thinking staff members locked the outside doors and barricaded themselves inside when they heard gunshots.

Johnston said the gunman spent about six minutes shooting into Rancho Tehama Elementary School before driving off to continue shooting elsewhere. Johnston said one student was shot but is expected to survive.

He said the 45-minute rampage ended when a patrol car rammed the stolen vehicle the shooter was driving and killed him in a shootout.

Witnesses reported hearing gunshots and children screaming at the school, which has one class of students from kindergarten through fifth grade.

The shootings occurred in the rural community of Rancho Tehama Reserve, a homeowners association in a sparsely populated area of rolling oak woodlands dotted with grazing cattle about 130 miles north of Sacramento.

Many there live in poverty, but others are better off.

“It’s not a bad community at all,” said Harry Garcia, who was minding his parents’ convenience store La Fortuna Market. “Some people keep their properties nice- some don’t. They rough it out here. Some go with minimum stuff. Some don’t even have power out here.”