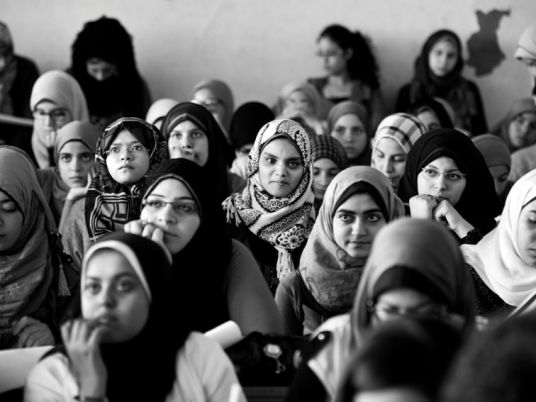 Only one in four men in the Arab world and the Middle East believes in gender equality and equal opportunities for men and women, according the International Men and Gender Equality Study in the Middle East and North Africa (IMAGES MENA

The study was conducted by UN Women, Promundo ­- a global leader in gender equality studies – and other contributors. In total 10,000 individuals were surveyed, both men and women aged 18 to 59 from Egypt, Morocco, Lebanon and Palestine.

The study showed that the vast majority of Arab men who were surveyed in the four countries support inequitable, traditional attitudes that perpetuate violence against women or confine women to conventional roles, with roughly two-thirds to more than three-quarters who asserted that a woman’s most important job is to "care for the home".

Shockingly the views of the majority of the women interviewed were no different to the men’s; about half of women across the four countries support the same inequitable beliefs and have no idea about their potential rights and roles.

The survey found that the younger men had similar inequitable attitudes about gender rights as their older counterparts. “It may be that the challenging economic circumstances in which younger men find themselves – making it difficult to find a job and therefore to achieve a socially recognized sense of manhood – are producing a backlash against gender equality,” the study said.

The study explained that it could be due to the conservative religious climate in which a younger generation has come of age.

The study discussed the findings of each country independently. In Egypt the vast majority of men and some women held inequitable opinions about gender rights and relations, as the majority of Egyptians have patriarchal attitudes toward male and female roles.

“These patterns begin in childhood, with men and women often following the models established by their parents. Both men and women reported having more power and control in household decision-making than the other gender acknowledges,” the study said.

The survey discovered that two-thirds of Egyptian men surveyed support educational equality and equal pay for both genders and said that they are willing to along with female colleagues. In contrast, three-quarters of Egyptian women wanted the same right to work; however, the study showed that almost 90 percent of women said that men’s employment is more important "if employment is scarce".

On domestic violence, the study surprisingly showed increasing indices of Arab men’s violent beliefs towards women – more 50 percent of men surveyed believe that women deserve to be beaten sometimes. The paradox is that more than 30 percent of women agreed on that point.

Moreover, respondents of both genders reported that they’ve been vulnerable to violence in school and at home as children; 30 percent of men said that were beaten as children at home and more than 80 percent were physically punished by their teachers. Girls tended to be subjected to less physical violence at school, but were more vulnerable at home.

Despite nationwide government campaigns against female genital mutilation, at least 70 percent of Egyptian men and more than half of women agreed with the cultural practice of FGM.

Both genders, especially women, confirmed that men have the duty to exercise guardianship over their female relatives including controlling how they dress; 77.9 percent of men and 79.1 of women agree with this point. The study showed that only a quarter of Egyptian men reported that women should have the same freedom to access the Internet as men, compared to 41.6 percent of female respondents.

“Men recognize women’s abilities to lead, but generally oppose their prominence in political life,” the study said, pointing out that around two-thirds of Egyptian men surveyed opposed more women in positions of political authority, and more than half of men believed that politics are best left to men.

Moreover, 50 percent of male respondents doubted that women can be both effective politicians and homemakers, and almost three-quarters said that women are too emotional to lead. Surprisingly the study showed that younger men are particularly opposed to female political leadership.

“In spite of the gap in who does the daily caregiving, Egyptian men would like to do more,” the study said, reporting that more than 60 percent of men said they spend very little time with their children due to work but roughly half of them participate in some aspects of childcare. Nevertheless, 98 percent of men and 85.2 of women agreed that changing diapers, giving baths to children and feeding children should all be the mother’s responsibility.

“This inequitable division of housework puts a greater burden on women, hindering their involvement in societal or political issues and maintaining their marginal position within the family and society,” the study said.

Finally the study said a sizeable minority of men in every country surveyed showed support for at least some dimensions of women’s equality and empowerment, while many men and women showed a mixture of equitable and inequitable attitudes and practices.

“There is a long and winding road that must be travelled before most men – and many women, too – reach full acceptance of gender equality in all domains,” the study concluded.