Get ready to experience cinematic chills and eye-catching flicks as the Panorama of the European Film opens its doors to audiences from November 25 to December 5.

The panorama’s 8th edition promises to present movie goers with an intriguing selection of films, including 65 award-winning feature and documentary films from across Europe.
The European Cinema section’s highlights include Cannes Jury Prize Winner “The Lobster” and Cannes Official Selection “Tale of Tales”, starring Salma Hayek, 45, who received the award for Best Actress at the Berlin International Film Festival. 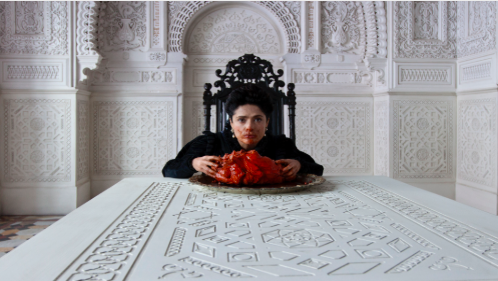 Actress Salma Hayek starring "Tale of Tales"
This year, the panorama will feature a film section titled Balkan Focus, showcasing an array of movies from the Balkans that have succeeded in captivating audiences and winning awards. “The High Sun”, which won the Jury Prize in the Un Certain Regard section of the 68th Cannes Film Festival, is worth watching.
Aside from putting an emphasis on the creative wealth of the European film industry, the panorama is also a platform for promising and up-and-coming talents introduced through the Emerging Directors section.
Two of the entries for the Oscar’s Best Foreign Film award, the highly anticipated French-Turkish film “Mustang” and the Austrian horror-thriller “Good Night Mommy”, will be screened in the Emerging Directors section.
Since the founding of the panorama, the Documentary Rendez-vous section has been a venue for short documentary films that portray a first-hand experience through the camera lens. “Amy”, a biopic about legendary singer Amy Winehouse, is among the documentary films that should not be missed this year.
The Crossroads section is dedicated to films that were born out of co-operation between the Arab world and Europe. “On the Bride’s Side” is a Syrian-Palestinian-Italian film addressing the refugee crisis with an intriguing storyline of the feature characters' journey to Sweden.
Films in the Carte Blanche section will be unveiled during the panorama and are based on the favorite European films selected by renowned Egyptian filmmakers Mohamed Khan, Amr Salama and Hala Galal. A discussion will be held following the screening of each film where directors will recount to audiences how the selected films influenced them.
The opening film “Mia Madre” (My Mother), directed by Nanni Moretti, will be showcased on November 25 at 9:30 p.m. at Karim Cinema. “Mia Madre" is a 2015 Franco-Italian drama that recounts the experience of a “film maker who has to cope with her dying mother and a pompous American star”, according to The Guardian.
For Odean and Karim cinemas, tickets are available for LE20 (10 a.m., 1 p.m.) and LE25 (3:30 p.m., 6:30 p.m., 9:30 p.m.).
This year the panorama will go beyond the capital and will feature screenings in Tanta (Rivoli Cinema), Minya (CityScape Cinema) and Alexandria (Amir Cinema).
In Cairo, screenings will be held in two main cinemas: Zawya Cinema (Odeon) and the newly-renovated Karim Cinema (Emad El Din Street, Downtown).
Special screenings will be showcased in the Americana Plaza cinema (Sheikh Zayed) and Point 90 (Tagamoa), and there will be selected free screenings in collaboration with the Italian Culture Institute, the Goethe Institute and the French Institute.
Odeon Cinema is located at 4 Abdel Hamid Said St. off of Talaat Harb St., Downtown, Cairo.
Karim Cinema is located at Emad Al-Din St., Downtown, Cairo.
For the full line-up and more information, visit the panorama’s Facebook page and official website.
Tags
Amy foreign films Panorama of European Film tale of tales