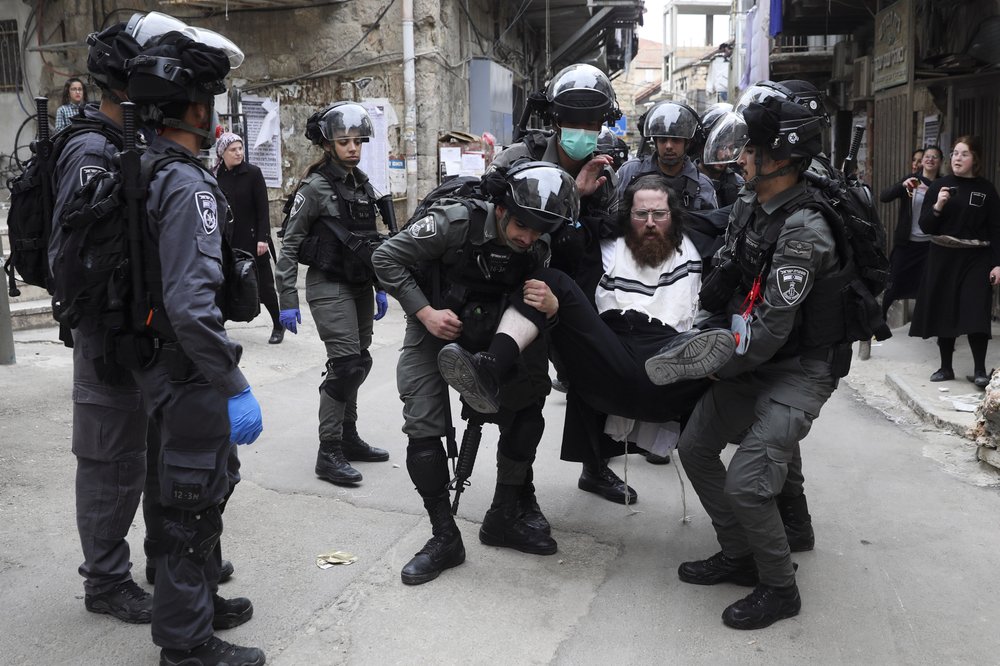 BNEI BRAK, Israel (AP) — When Israel went into its second nationwide coronavirus lockdown in September, most of the country quickly complied. But in some ultra-Orthodox areas, synagogues were packed, mourners thronged funerals and COVID-19 cases continued to soar.

The flouting of nationwide safety rules in ultra-Orthodox areas reinforced a popular perception that the community prioritizes faith over science and cares little about the greater good. It also has triggered a backlash that threatens to ripple throughout Israeli society for years.

“Many Israelis understand that there is a serious challenge and we cannot just sort of allow time to pass and hope that this issue will go away,” said Yohanan Plesner, president of the Israel Democracy Institute, a think tank that studies Israeli society and politics.

Over the years, the ultra-Orthodox minority has wielded outsize influence over broader Israeli society, using its kingmaker status in parliament to secure generous budgets and benefits for its people and generating resentment among the broader public.

The events of 2020 brought long-simmering tensions to a boil. Medical experts estimate the ultra-Orthodox have accounted for about one-third of the country’s coronavirus cases, despite making up just 12 percent of the population.

Avraham Rubenstein, mayor of the ultra-Orthodox city of Bnei Brak, calls the uproar unfair. Rubenstein has been widely praised for overseeing a successful effort to bring one of Israel’s worst coronavirus outbreaks under control in just a few weeks. He believes the anger toward the ultra-Orthodox is motivated by ignorance, animosity and hostile media coverage.

“There is a creator of the universe,” he acknowledged. “We are believers. But when you go outside in Bnei Brak, the first thing you will see is people wearing masks and keeping their distance.”

Rubenstein says the lawbreakers are a tiny percentage of the ultra-Orthodox community and that the high infection rates are due to crowded conditions in his city. Ultra-Orthodox Jews live in some of Israel’s poorest cities and neighborhoods. It is common for families of eight or 10 people to be crowded together in small apartments.

Early on in the coronavirus crisis, Israel was seen as a model of success. The country moved quickly last spring to seal its borders and impose lockdown restrictions that appeared to bring the virus under control. But the reopening of the economy was mismanaged, and the virus quickly returned.

The neighboring Palestinian territories — the West Bank and the Gaza Strip — are coping with their own crises.

With a poorer population and much less advanced medical system after years of Israeli occupation, the Palestinian Authority in the West Bank has repeatedly imposed lockdown measures, devastating an already fragile economy.The Hamas-ruled Gaza Strip, stifled by an Israeli-Egyptian blockade, did not report a single case of community-spread coronavirus until August. But the numbers have spiked since then, raising fears that its decrepit health system could collapse.

In Israel, the ultra-Orthodox were not the only ones who struggled. Israel’s Arab minority also has experienced disproportionately high infection rates, in large part because of the popular custom of holding large weddings. Young Israelis, Jewish and Arab, flocked to beaches and parties. And many middle-class Israelis have participated in mass demonstrations against Netanyahu as the economy has suffered and unemployment has soared.

Rubenstein won plaudits for bringing in a retired army general to manage the crisis last spring. His city operates numerous programs to assist the ill and their families and maintains a situation room that keeps close tabs on infections. It has enlisted hundreds of volunteers who have recovered from COVID-19, believing they are no longer contagious, to help older residents. Many people worship outdoors, and synagogues throughout the city have put up plastic sheets to keep attendees safe from one another.

Rubenstein says Israelis must understand that the ultra-Orthodox, who avoid computers and the Internet and consider religious study to be essential like “water and oxygen.” Their schools have remained open while other children study remotely. He says they must be allowed to manage things in their own way, but that doesn’t mean people want to be sick or don’t consider themselves proud Israelis.

“We are an inseparable part of the country,” he said.

By JOSEF FEDERMAN
IMAGE: Israeli police arrest an ultra-Orthodox Jewish man during protest against government’s measures to stop the spread of the coronavirus, in the Mea Shearim neighborhood of Jerusalem, on Monday, March 30, 2020. (AP Photo/Mahmoud Illean)