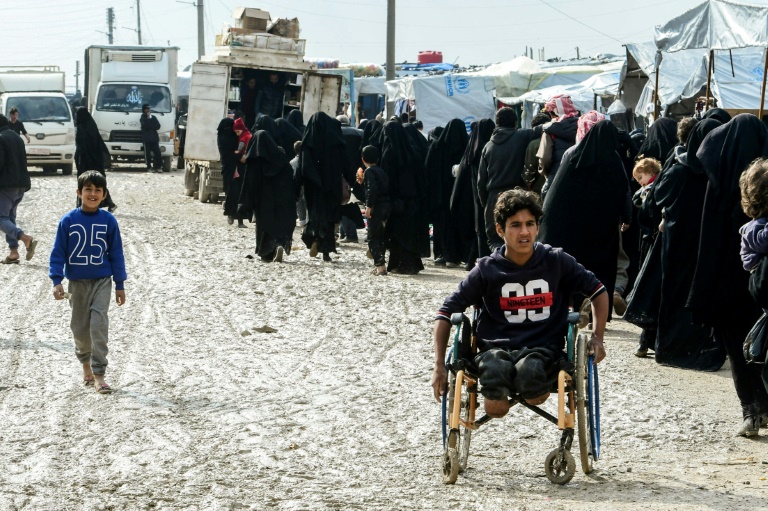 Malnourished children struck down by chronic diarrhea, mothers too weak to breastfeed — in northeastern Syria’s Al-Hol camp, a humanitarian emergency is unfolding.

Arabic, French, German and English voices fill the air in the muddy alleyways, as foreign women who married into the Islamic State group and civilians displaced by the fighting against jihadists seek out assistance.

But while much divides the two groups, one thing unites them; they despair over the camp’s lack of food and medical care.

“It is a tragic life,” said Najwa Ali Jolane, a young Syrian mother who has lived at Al-Hol for three and a half months.

Flapping in the springtime breeze, white tents embossed with the UN refugee agency’s acronym UNHCR stretch as far as the eye can see.

But the threadbare structures cannot cope with the flood of women and children who in recent months have fled a string flattened villages in eastern Syria, including Baghouz, where IS’s so-called caliphate was declared defeated on Saturday

The most fortunate families in Al-Hol have their own tents, while the unlucky ones shelter with dozens of others in warehouses.

“There are 10,000 people living in large communal tents which lack privacy,” said Paul Donohoe, from the International Rescue Committee.

An extra 5,000 tents are needed to house people, he said.

The flood of arrivals in Al-Hol has transformed the camp into a chaotic town.

It now brims with more than 70,000 people, but was only designed to accommodate a seventh of that number.

Kurdish authorities have raised the alarm and called on the international community to step up and help.

In front of a World Food Programme warehouse, huge lines of women — all dressed in the full black niqab — stand in the mud, awaiting rations that the UN agency says are enough for a month.

Some in the line refuse to speak to journalists, but others — Jolane included — take the opportunity to rail against their misfortune.

“On days when it rains, our tent is flooded with water, so we have to move to a neighbours’ tents,” said the former resident of Hajin, a village near Baghouz that was flattened by fighting in December.

“What is lacking is proper space for the continuous influx of people as well as proper health facilities to treat injuries and diseases,” she said.

A Syrian woman, who did not want to give her name, said her three-year-old daughter “has been sick since she arrived here” around one month ago.

“She is vomiting and has persistent diarrhea,” she said angrily.

“We were brought here in uncovered vehicles. The children fell sick (and) many died on the way,” she added.

At least 140 people, mainly children, have died en route to Al-Hol or shortly after arriving since December, according to the IRC.

Cordoned off from the main camp and deemed a security threat, the foreign women who joined IS complain that their money and cell phones have been confiscated.

Many fear chronic diarrhea could weaken their children beyond the point of no return.

They told AFP they have been unable to get hold of Flagyl, a drug commonly used to treat persistent cases.

According to Save the Children, some 30 per cent of children under the age of five screened at the camp since the start of February suffer acute malnutrition and WFP says it has tracked several cases of “dehydration and diarrhea”.

The future of the 9,000 women and children held in the foreigners’ section of Al-Hol is a constant headache for Kurdish authorities, who want to get rid of them, but Western capitals are reluctant or outright refuse to bring them home.

The foreign women are monitored closely and Kurdish guards escort them when they go to market in the main part of the camp.

“We cannot stay here, we have no food, no money,” said Romina Scheer, a young German woman.

She said she traveled to Syria in December 2014 to join IS, where she married a fellow German IS member.

“I cannot breastfeed because I did not have enough to eat,” said Scheer.

Her children include a three-month-old baby boy and an eight-year-old daughter whose blonde pigtails and earring mark a stark contrast with her mother’s austere attire.

“My children — every day they ask: ‘Mummy when are we going to go home?'” said Scheer.