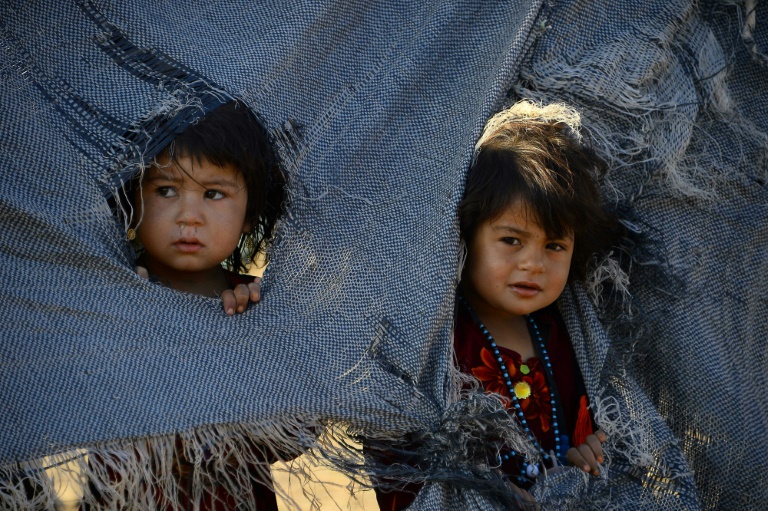 For only the second time in his life, Afghan farmer Murad Khan Ishaqzai has been forced to leave the home where he was born 80 years ago — not by war but the worst drought in living memory.

Ishaqzai, wizened and weather-beaten by decades of working in his wheat field, is one of more than 250,000 people in western Afghanistan displaced by the months-long dry spell that has devastated crops, livestock and water supplies.

Beaten by the inhospitable conditions, many families in rural areas decided to travel hundreds of kilometers in the back of rented trucks through districts contested by Taliban fighters and government forces to reach the city of Herat.

There, they set up pitiful, makeshift tents on the rocky outskirts of the provincial capital.

“The farms were destroyed, our livestock perished, and we left our donkeys in the desert because we couldn’t feed them any more,” said Ishaqzai, who brought his family from Ghormach district in Badghis, one of the hardest-hit provinces in the country.

Conditions are miserable in the camps that have mushroomed across the unforgiving landscape in recent months as above-average temperatures and intense fighting forced more people to abandon their villages and livelihoods.

Dust whipped up by the relentless wind has become a second skin for camp dwellers. Children have little to play with except rocks — when they are not filling their family’s jugs with water delivered by trucks, begging or collecting rubbish in the city.

Men who used to proudly support their families now sit around with nothing to do, while their wives squat on the ground making bread — the only food many of them can afford to eat.

“If I could have stayed there (in Badghis) I wouldn’t have come here, even if you gave me all of Herat city,” Ishaqzai said, a pristine white turban wrapped around his head.

A drought 15 years ago temporarily forced Ishaqzai and his family from their home, but this one is “the worst in my life”, he said.

The rising number of displaced families has overwhelmed Afghan officials and foreign aid groups, which are struggling to meet demand for food, shelter and health services months after the crisis began.

– ‘Everyone is starving here’ –

“Over 5.5 million people are in need of emergency relief (due to drought and conflict),” Lanzer told reporters in New York last month.

“If we do not engage more on the short-term emergency relief requirements, the development gains that we have achieved over the past years… could be lost.”

The drought affecting 2.2 million people across Afghanistan was triggered by a huge shortfall in snow and rain last winter.

Roughly 1.4 million people are in urgent need of food assistance — the majority in the western region — with only half reached so far, according to the United Nations Office for the Coordination of Humanitarian Affairs (OCHA).

More than 70 percent of displaced families in the west do not have enough to eat and 33,200 acutely malnourished children under the age of five need “life-saving treatment”, OCHA said in a September 20 report.

People at the camps told AFP they have been surviving on a diet of bread and tea for months because they do not have enough money to buy fruit, vegetables or meat.

“Everyone is starving here,” Naw Khan Zamanzai, also from Ghormach district, told AFP as he sat in his tent surrounded by his six children.

“We didn’t care about the war as it’s been going on for years. We were happy, busy farming but because of the drought our children were starving.”

Basic sanitation is also in short supply in the camps. While some people have access to latrines, hundreds more are needed. In the meantime, many defecate in the open.

“Leaving our homes is like leaving our parents,” Abdul Razaq, 30, from Murghab district in Badghis told AFP.

After watching helplessly as his sheep began to perish, he sold the rest for a 10th of their original price and brought his wife and three children to the camp.

“We prefer to die here than go back to war and drought,” he said.

Ishaqzai, whose health is failing, says he cannot afford the 10 afghanis (around 15 cents) needed to see a doctor.

He even fears he may not live long enough to see his home again.

“You can see that my life is almost over in this world.”