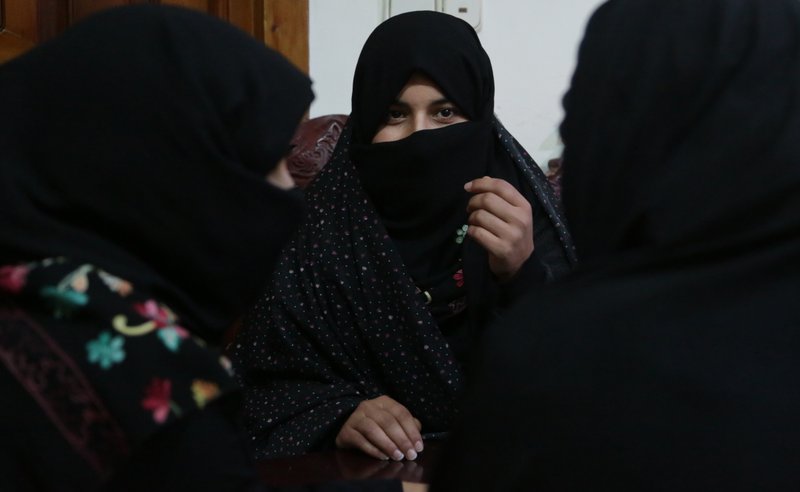 HERAT, Afghanistan (AP) — For four hours, Khadeja begged her in-laws to take her to the hospital. The skin on her face and neck was peeling. The pain was excruciating. Her husband had thrown a pot of scalding water on her face and upper body.

Her head was bowed and sobs convulsed her body as she remembered the moment. “The pain . . . I can’t say how much I hurt.”

She eventually received treatment, but scar tissue on her neck makes breathing difficult and her hands are misshapen. Her husband — a man she was forced to marry at 16 by her father — was never held accountable. Such impunity for violence against women remains pervasive in Afghanistan.

The suffering of young women like Khadeja is why women rights activists say they are demanding a seat at the table in negotiations between the government and the Taliban over peace and Afghanistan’s future.

Women have made gains since the 2001 fall of the Taliban, but the country remains among the worst places in the world to be a woman. Activists fear the advances they have achieved will be bargained away in negotiations, with pressure heavy for a deal as the United States seeks to end its military involvement in the country.

The Taliban were notorious for their repression of women during their rule, including banning education for girls and imposing the all-encompassing burqa on all women. But activists are just as worried about the other side: Afghanistan’s leadership since the Taliban’s ouster has been dominated by conservatives, warlords and strongmen whose attitudes toward women are often little different.

Women are already meeting resistance to having a strong voice in the talks. Activists are pressing for a third of participants in any negotiations to be women — though by all rights, they say, it should be half.

President Ashraf Ghani appointed only five women to a 37-member council created to shepherd negotiations. The other members include ex-mujahedeen, warlords, a vice president accused of a war crime and a former US-declared terrorist.

Attempts were also made to severely limit women’s participation in the first round of all-Afghan talks between the government and Taliban, meant to have been held last week in Qatar. Under pressure from the Qataris, Ghani reportedly pared down the women in his list of participants from 54 to fewer than 15. The organization sponsoring the talks, Qatar’s Center for Conflict and Humanitarian Studies, further reduced it to 10.

In the end, the gathering was cancelled because the Qatari center, likely acting under pressure from the Taliban, also sought to remove government ministers from Ghani’s list of more than 240 participants.

Suraya Pakzad, a rights activist, was among 18 would-be female participants from the Afghan Women’s Network. Even before the cancellation, they were told they wouldn’t be let in.

“Women had travelled from far away rural areas, through many Taliban checkpoints in their burqas and passed very dangerous areas to attend,” said Pakzad.

Ahead of negotiations, the Taliban say they will accept that girls go to school and women work and even be judges. But they say a woman cannot become the country’s leader or the Supreme Court chief justice.

That’s not enough, said Sima Samar, a former women’s affairs minister who was removed for challenging warlords in the post-Taliban leadership and now chairs the independent Human Rights Commission.

“It is undermining equality,” she said. “In the Quran it says that everyone is born equal, with dignity, then why are they making reservations for us?”

The advances made since 2011 have been important. Women are now members of parliament, girls have the right to education, women are in the workforce and their rights are enshrined in the constitution. Women are seen on television, playing sports and winning science fairs.

But the gains are fragile, and their implementation has been erratic, largely unseen in rural areas where most Afghans still live, Samar said.

International funding for projects for women is drying up. Political will is also uncertain. Ghani refused to put legislation on the Elimination of Violence Against Women to a vote in parliament, fearing it would be defeated by the overwhelming conservative majority, say activists.

Nearly 18 years after the US-led coalition ousted the Taliban, Afghan women still live under a crushing weight of discrimination. The 2018 Women, Peace and Security Index rated Afghanistan as the second worst place in the world to be a woman, after Syria.

Only 16 percent of the labor force is women, one of the lowest rates in the world, and half of Afghanistan’s women have had four years or less of education, according to the report’s data, compiled by the Georgetown Institute for Women, Peace and Security and the Peace Research Institute of Oslo. Only around half of school-aged girls go to school, and only 19 percent of girls under 15 are literate, according to the UN children’s agency.

Nearly 60 percent of girls are married before they are 19; of those, the average marry between 15 and 16, and to spouses selected by their parents, according to UNICEF. Most women in Afghanistan’s prisons are there for “morality crimes,” which include leaving abusive husbands or demanding to marry a man of their choice.

A survey released in January said only 15 percent of 2,000 men polled believed women should be allowed to work outside the home after marriage and two-thirds said women already had too many rights. The survey was conducted by UN Women and Promundo, a group promoting gender justice.

Women recall the ‘hell’ of Soviet war in Afghanistan

It wasn’t like this before four decades of war, activists say. Women once were in the workforce, went to school in mixed-gender classes and even served as generals in the military.

The slide into repression began in the 1980s when Washington backed the mujahedeen, or holy warriors, to defeat the former Soviet Union, which invaded Afghanistan in 1979. US President Ronald Reagan praised the Islamist forces as “freedom fighters.” At the time, textbooks supplied by the University of Nebraska taught young Afghan refugees the English alphabet using such ABCs like “J is for jihad” and “I is for infidel,” in reference to the fight against the communists.

Many of those mujahedeen later formed the Taliban movement. Others are now members of Afghanistan’s government and opposition factions.

Under their domination and conservative interpretations of Islam, women have been pushed out of the public sphere. Fathers, brothers and tribal councils made up of men hold sway over women’s and girls’ lives.

Pakzad, the women’s rights activist, said she wishes she had the freedoms her mother did. She said she was one of 15 brothers and sisters and her father made sure they all had equal access to education, even though he “didn’t know a single word” about women’s rights.

In contrast, she said, her son “is not as open minded as my dad was because my son grew up in war,” hearing of women being stoned for alleged infractions of the Quran, killed for dishonoring family and shamed for defying strict rules. Her son threatened to leave home if she got a driver’s license, mostly because he feared she would be targeted by radicals but also because his friends would tease him.

Pakzad operates women’s shelters in western Afghanistan and provides legal services to the poorest. Her activism has made her a target of religious extremists and men who consider her support for women as interference in their domestic affairs.

Threats became specific. Letters promising to kill her and her family detailed what the youngest of her six children — her 15-year-old son — was wearing, his route to school, his friends. She sent him to safety in Germany.

“They want to let me know they are watching me,” she said, “even sometimes telling me what street I have crossed and when.”

In the western province of Herat, Khadeja’s mother died when she was young, and her father married a woman who resented her and wanted her out of the house. They took her out of school after the fifth grade even as she pleaded with her father to let her continue.

At 16, her father said she had to marry. From the beginning, her husband beat her, often tying her a tree as he did it, or cut her with knives, she said. When she fled, her father sent her back, telling her: “I only want you back home wrapped in the white shroud of the dead.’”

Her husband was briefly jailed for hurling the boiling water on her, but then released without charges. Once home, he threatened to cut off Khadeja’s nose. Again, she fled to her father’s house. Her stepmother told her she was ugly now and no one would pay a price to marry her if she left her husband.

“I didn’t know what to do or where to go. I couldn’t go back to my husband because he would kill me,” Khadeja said.

She made it to one of Pakzad’s shelters. There, she takes classes, and is always the first to raise her hand. She said she hopes to be a teacher one day.

She remains in constant pain. “All the time I pray to my God to help me die,” she said, sobbing.

At the shelter, dozens of women and girls struggle with their nightmares. Khadeja and other girls spoke on condition they be identified only by first name, fearing reprisals by family.

Alissa, a 16-year-old, has lived in the shelter for five years after escaping her husband.

She was forced to marry him at age six in an arrangement so her brother could marry her new husband’s sister. In her village, girls as young as seven and eight were often wed, but even there, six was considered young.

“I didn’t even know what a wedding was,” she said. “All night I was so scared, and the next day I cried and cried.” Alissa looked down as she spoke, nearly whispering, unable or unwilling to talk about life with her husband.

She contemplated suicide and wanted to leave, but her brother threatened to kill her if she came home. Finally, after four years, another brother brought her home. Her mother-in-law demanded her back, saying, “We paid for her.” As an alternative, she wanted Alissa’s younger sister, then 7. Alissa and her sister both fled to the shelter.

Pakzad listened as Alissa spoke. She wept for Khadeja.

Including women in negotiations is “not a gift, it is our right,” she said. “We the women of Afghanistan are suffering, fighting to bring peace in Afghanistan, to change Afghanistan.”

Taliban team at Afghan peace talks in Qatar to include women: spokesman