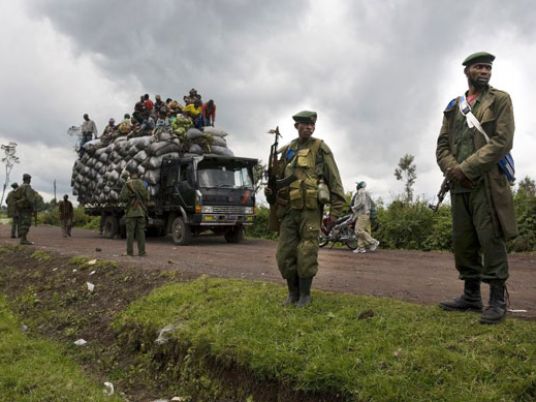 US-backed African Union troops have killed a senior commander in the Lord’s Resistance Army (LRA), a Ugandan army spokesman said on Tuesday, part of efforts to track down the guerrilla group and send its leader to the Hague.
US Special Forces have supported a Regional Task Force (RTF) of African troops since 2011 to try to track down LRA leader Joseph Kony, wanted by the International Criminal Court for war crimes and crimes against humanity for his role in a guerrilla war in Uganda and neighbouring states.
The group, which launched its uprising two decades ago, has moved from Uganda to the border region of Congo, South Sudan and the Central African Republic (CAR), where analysts say it could rebuild in the political chaos sweeping through the country.
“We were alerted last week by our US partners about a group of 30 LRA fighters who were about to cross River Vovodo in southeastern CAR,” said Uganda’s deputy army spokesman, Major Robert Ngabirano.
“We subsequently deployed and managed to kill 14 including Colonel Samuel Kangul who is Kony’s chief planner and No. 4 in their hierarchy. Some others drowned in the river and we were also able to capture one alive,” he said, adding the team had also captured weapons and two satellite phones.
A US Special Forces adviser in South Sudan, speaking to Reuters on the condition of anonymity, said a US helicopter ferried Ugandan troops with the RTF into CAR’s remote Vovodo and Chinko river basin on 22 November. The mission lasted a week.
He did not give details about LRA members killed in the mission involving 20 Ugandan commandos with US personnel, although he put the number at five to 10 deaths.
“The river basin has been denied now as an area LRA previously had freedom of movement," he said. "The operation also resulted in a lot of belt and magazine fed military weapons being captured.”
LRA fighters are well known for using extreme violence, including chopping off limbs as a form of punishment, as well as raping young girls and abducting them for use as sex slaves.
The African Union and the United Nations said last month the Central African Republic had been in contact with Kony and LRA fighters to urge them to surrender, but said Kony’s whereabouts were still unknown.
Prior to the RTF assault, the LRA launched an attack on Nazinga and Tambura villages in South Sudan on 7 November, the first such raid in that region in two years.
Colonel Gabriel Ayor, a South Sudanese RTF deputy commander based in Yambio, said the attack appeared to be driven by a need for food, suggesting the LRA had been weakened. He called it “desperation not an offensive move.”
John Zawo, the Anglican Bishop of Ezo diocese in South Sudan that sits on the border with Congo and CAR, said better communications were needed to protect the region from the LRA.