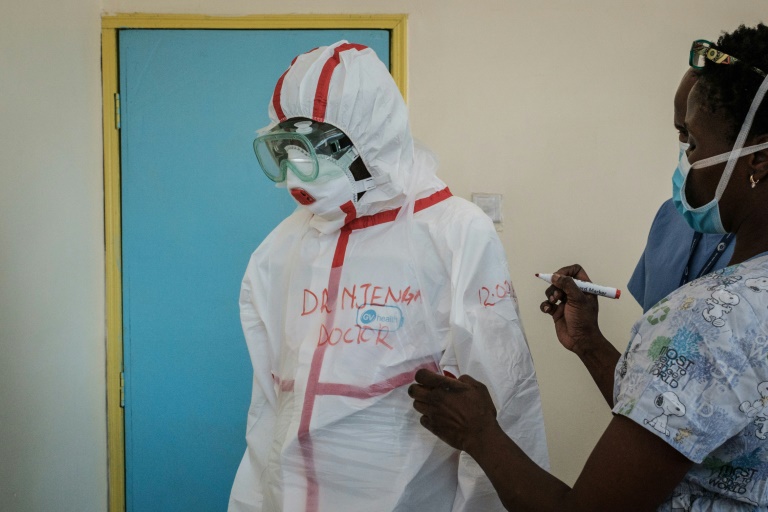 Equipment shortages, scarce beds and poorly-paid doctors and nurses: Africa is finding that it has few means to protect itself as a feared coronavirus tsunami looms.

Earth’s poorest continent has so far confirmed around 1,800 cases and 57 deaths — a tally that is low compared with Europe, the Middle East and Asia, but is now ratcheting up quickly as testing remains patchy.

In Nigeria, the region’s most populous country, doctors complain that years of underfunding and neglect have debilitated the health system.

“No country is really prepared for this — even countries with very developed healthcare systems are crying out for help,” Yusuf Tanko Sununu, the head of the health committee in Nigeria’s lower house of parliament, told AFP.

“In a low-resource country like ours, the healthcare system is already facing serious problems.”

While the government has been setting up more isolation wards and insists respirators are on its “shopping list” — it has not said how many machines there are and Sununu insists the capacity is “grossly inadequate”.

“We need to move faster — but one major drawback is global travel restrictions mean the ability to get in equipment is seriously limited,” he said.

Francis Faduyile, head of doctors’ union the Nigerian Medical Association, complained that the majority of health facilities across the country do not even have clean running water.

His organization has told medics to call off strike actions over unpaid wages after they staged a walkout in the capital Abuja last week — but he insists the government needs to do more to provide protective equipment.

“We don’t have proper masks, or at least, we need to assess how many we have,” he told AFP.

“We are doing our own background work and getting ready.”

Figures for critical care facilities in Africa are hard to find and the World Health Organization (WHO) itself said last week it was still trying to assess the continent’s capacity in this area.

The global body’s Africa director Matshidiso Moeti said that intensive care beds were in “very short supply” and even countries with the most advanced systems like South Africa would struggle.

“They are recognizing too that looking at the evolution in terms of the number of cases if the situation explodes in numbers, and large numbers of people have severe disease and are critically ill, this will indeed be a challenge,” he said.

In many places the situation is already far more precarious.

A Kenyan health ministry official speaking on condition of anonymity told AFP that across the country of some 50 million there are no more than 100 intensive care units that “are operational at any given time”.

In Cameroon, which has recorded over 50 infections, an aid worker said the country “has no capacity to deal with serious cases”.

The central African nation — like many others in the region — is already facing armed conflicts that have displaced people into camps vulnerable to the spread of other diseases like cholera.

Like strife-torn Central African Republic and Somalia, both of which have recorded infections, it boasts less than one doctor for every 10,000 citizens.

“If the epidemic spreads then it is going to be serious,” the aid worker said on condition of anonymity.

Decades of economic misrule have brought the health service in Zimbabwe to its knees.

“Unfortunately, the system itself is overstretched and inadequate to deal with a coronavirus epidemic,” warned Norman Matara, secretary general of the Zimbabwe Association of Doctors for Human Rights.

In West Africa, which dealt with the devastating Ebola epidemic from 2013-2016, health services are falling back on the facilities put in place to cope with that outbreak.

Ivory Coast, which managed to avoid the spread of Ebola by closing its border with neighboring countries, already has isolation units set up at its frontiers, said health ministry official Albert Ossohou Edi.

“Personnel have training and there are some stocks of protective equipment but we still need more,” he told AFP.

But in the economic hub of Abidjan the infectious disease unit at the main hospital is still looking to bolster its intensive care beds from just 20 to 70.

“We are checking with all regions to evaluate their capacity, personnel and equipment needs,” he said.

“But many regional hospitals have been undergoing refurbishment since 2019 and aren’t set to open until 2021.”

In the Sahel, Mali has 56 ventilators in a country of around 19 million people, according to the latest health ministry figures.

“We are preparing for the worst,” Prime Minister Boubou Cisse said, cautioning: “The means at our disposal do not enable us to be behind every Malian.”

Image: AFP / Yasuyoshi CHIBA Protection: A doctor gets suited up for visiting a quarantine ward at Kenyatta National Hospital in Nairobi

Worldwide virus lockdowns as WHO warns young people 'not invincible'