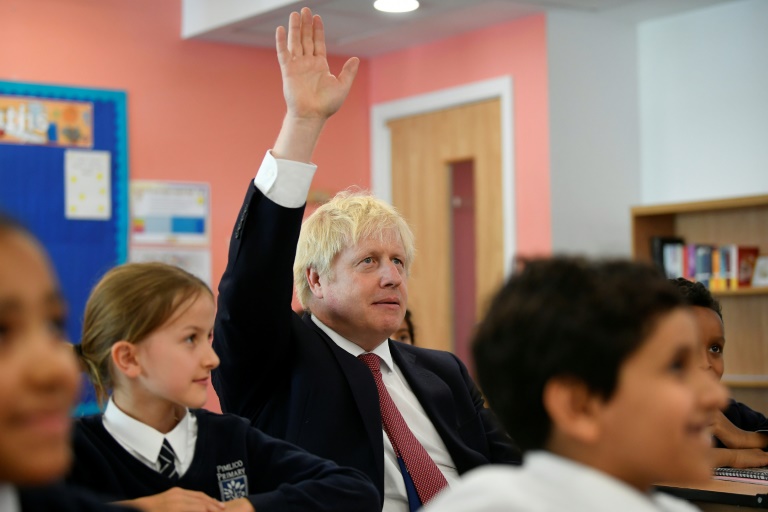 British Prime Minister Boris Johnson insisted Tuesday he was working hard to strike a divorce deal with the European Union, after he suspended parliament following a series of bruising clashes with MPs over his Brexit plan.

The day after meeting Irish Prime Minister Leo Varadkar in Dublin, Johnson held talks with his Northern Irish allies in London — all key players in the race to secure a deal before Britain’s EU exit on October 31.

“We’re working very hard to get a deal. I think we will get a deal but if absolutely necessary we will come out with no deal,” Johnson said during a school visit.

The Conservative leader has faced intense opposition in the House of Commons to his threat to leave the bloc without agreeing exit terms with Brussels.

Before he suspended parliament early Tuesday, MPs rushed through legislation requiring Johnson to postpone Brexit by three months if he fails to secure a deal at an EU summit on October 17-18.

He has previously said he would rather be “dead in a ditch” than delay Brexit — but MPs also rejected his call for an early election to resolve the impasse.

His best hope now of meeting next month’s exit deadline is to get a divorce deal, but his options are limited.

Johnson took office in July promising to renegotiate the Brexit terms struck by his predecessor, Theresa May, which were rejected three times by MPs.

But the EU has so far refused, and accused London of failing to present any viable alternatives to the most controversial element, the so-called backstop plan to keep open Britain’s border with Ireland.

There is speculation that Johnson is now softening his demand to abolish the backstop, which risks keeping Britain tied to EU rules for years after Brexit in order to avoid any trade barriers.

Downing Street has denied this, while Northern Ireland’s Democratic Unionist Party (DUP), which props up Johnson’s government, is also opposed.

After talks in Downing Street, DUP leader Arlene Foster said that Johnson confirmed he would not accept a “Northern Ireland-only backstop”, which would tie Northern Ireland to EU rules but cut the rest of Britain loose.

“It is undemocratic and unconstitutional and would place a tariff border between Northern Ireland and the rest of the United Kingdom. That would be unacceptable,” she said in a statement.

There are no formal negotiations with Brussels but Johnson’s EU envoy, David Frost, has been holding talks with officials and will return later this week.

Meanwhile in London, a cross-party group of MPs met on Tuesday to discuss how they might yet get the existing deal through parliament if Johnson fails his renegotiation.

MPs only returned from their summer holiday last week but rushed through the “no deal” law before the session closed amid dramatic scenes early on Tuesday.

Prorogation is normally a routine event between annual parliamentary sessions but Johnson is accused of trying to muzzle lawmakers by doing it for five weeks, and right before the Brexit deadline.

“This stuff about it being anti-democratic — I mean, donnez-moi un break,” Johnson hit back on Tuesday, switching into Franglais.

Before parliament shut up shop in Tuesday, MPs voted to demand the government publish confidential papers about the potential impact of a no-deal Brexit.

Many fear that ending Britain’s 46-year-old membership of the EU without agreeing new terms would be hugely disruptive and accuse ministers of downplaying the risk.

Opposition leaders say they will not support Johnson’s calls for an early election until this option is off the table — but Johnson accused them of cowardice.

Image: POOL/AFP / TOBY MELVILLE British Prime Minister Boris Johnson’s best hope of meeting next month’s exit deadline is to get a divorce deal, but his options are limited