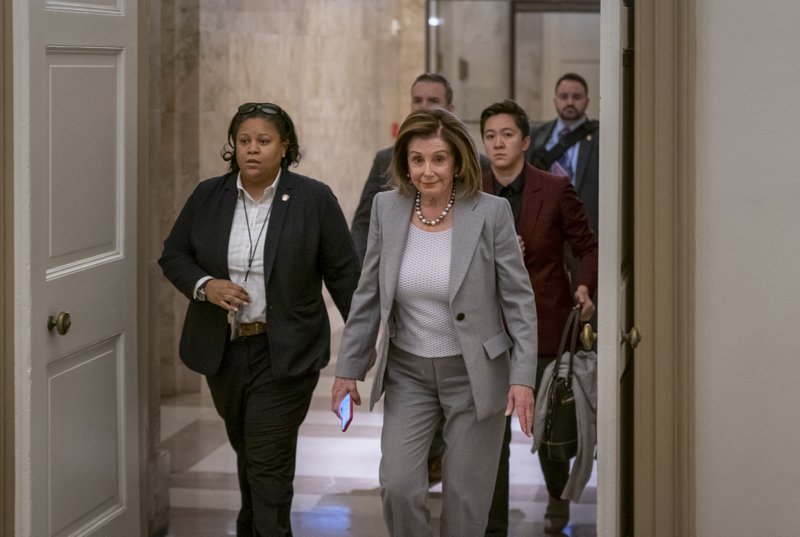 WASHINGTON (AP) — President Donald Trump says the Senate should simply dismiss the impeachment case against him, an extraordinary suggestion as the House prepares to transmit the charges to the chamber for the historic trial.

The Republican president is giving mixed messages ahead of the House’s landmark vote that will launch the Senate proceedings in a matter of days, only the third presidential impeachment trial in American history. Trump faces charges that he abused power by pushing Ukraine to investigate Democratic rival Joe Biden and then obstructed Congress.

First Trump was suggesting his own ideas for trial witnesses, then he said almost the opposite Sunday by tweeting that the trial shouldn’t happen at all.

“Many believe that by the Senate giving credence to a trial” over charges he calls a hoax, Trump tweeted, “rather than an outright dismissal, it gives the partisan Democrat Witch Hunt credibility that it otherwise does not have. I agree!”

The idea of dismissing the charges against Trump is as unusual as it is unlikely. Senate Majority Leader Mitch McConnell signed on to an outlier proposal circulating last week among conservative senators, but he does not have enough support in the Republican-held chamber to actually do it. It would require a rare rules change similar to the approach McConnell used for Supreme Court confirmations.

Speaker Nancy Pelosi warned Sunday that senators will “pay a price” if they block new witness testimony with a trial that Americans perceive as a “cover-up” for Trump’s actions.

“It’s about a fair trial,” Pelosi told ABC’s “This Week.” “The senators who are thinking now about voting for witnesses or not, they will have to be accountable.”

She said, “Now the ball is in their court to either do that or pay a price.”

Voters are divided over impeachment largely along the nation’s deeply partisan lines and the trial is becoming a high-stakes undertaking at the start of a presidential election year.

A House vote to transmit the articles to the Senate will bring to a close a standoff between Pelosi and McConnell over the rules for the trial. The House voted to impeach Trump last month.

Yet ending one showdown merely starts another across the Capitol as the parties try to set the terms of debate over high crimes and misdemeanors.

Trump first said Sunday it’s Pelosi and House Intelligence Committee Chairman Adam Schiff who should both testify, which would be unlikely.

The president said he shouldn’t have to carry the “stigma” of impeachment because he’s done nothing wrong. Pelosi said the House vote last month means Trump will be “impeached forever” and “for life.”

McConnell is reluctant to enter a divisive Senate debate over witnesses that could split his party and prolong a trial that is already expected to consume weeks of floor time.

He is seeking a speedy acquittal and has proposed a process similar to the presidential impeachment trial of Bill Clinton in 1999, which would start the proceedings and then vote later on hearing new testimony.

One leading Republican, Sen. Lindsey Graham of South Carolina, has already predicted that the trial would end ”in a matter of days.″ Graham and Sen. Josh Hawley, R-Mo. are leading the effort to dismiss the charges against Trump.

Trump delayed nearly $400 million in aide as Ukraine battled Russia on its border while he pushed the country’s new president to investigate political rival Joe Biden. Trump pays close attention to a conspiracy theory pushed by his personal lawyer Rudy Giuliani about Biden and his son Hunter Biden, who served on the board of a gas company in Ukraine while his father was vice president. No evidence of wrongdoing by the Bidens has emerged.

Some GOP senators want to turn the impeachment trial away from the Democrats’ case and toward the theories being pursued by Giuliani. GOP Sen. Rick Scott of Florida said Sunday he wants to hear from the Bidens “and find out — get to the bottom of that.”

At least one Republican up for reelection, Sen. Susan Collins of Maine, said last week she was in talks with GOP colleagues on a process that would allow them to hear more testimony as Democrats want.

The Democratic-run House has not yet set the timing for this week’s vote to transmit the impeachment articles to the Senate. Pelosi will meet behind closed doors with House Democrats to decide next steps on Tuesday morning ahead of the party’s presidential primary debate that evening, the last before the Iowa caucuses Feb. 3.

Once the Republican-led Senate receives the charges, the trial is expected to begin swiftly.

While some Democrats have grumbled about the delay, Pelosi and other party leaders defended the strategy, saying it produced new potential evidence and turned public attention on the upcoming trial.

“One of the things that holding on to the articles has succeeded doing is fleshing out McConnell and the president’s desire to make this a cover up,” Schiff, D-Calif., said on CBS’ “Face the Nation.”

Bolton’s remarks, which were recalled by witnesses in the House investigation, could cut different ways in testimony. He was said to have compared the Ukraine actions to a “drug deal” he wanted no part of and warned that Giuliani was a “hand grenade” about to go off.

House Democrats, who did not issue a subpoena for Bolton last year, did not rule out doing so now. Pelosi also left open the door to filing more articles of impeachment against Trump.

“Let’s be optimistic about the future … a future that will not have Donald Trump in the White House, one way or another. Ten months from now we will have an election, if we don’t have him removed sooner,” she said.

Image: Speaker of the House Nancy Pelosi, D-Calif., arrives at the Capitol in Washington, Friday, Jan. 10, 2020. Pelosi hasn’t relayed the articles of impeachment to the Senate for trial three weeks since President Donald Trump was impeached on charges of abuse and obstruction. Last night, she led the Democrat-controlled House in passing a measure limiting Trump’s ability to take military action against Iran after he ordered the US killing of a top Iranian general. (AP Photo/J. Scott Applewhite)

Trump has one of best weeks - apart from impeachment

Trump rails against delay in moving impeachment to Senate

Trump impeached for abuse of power