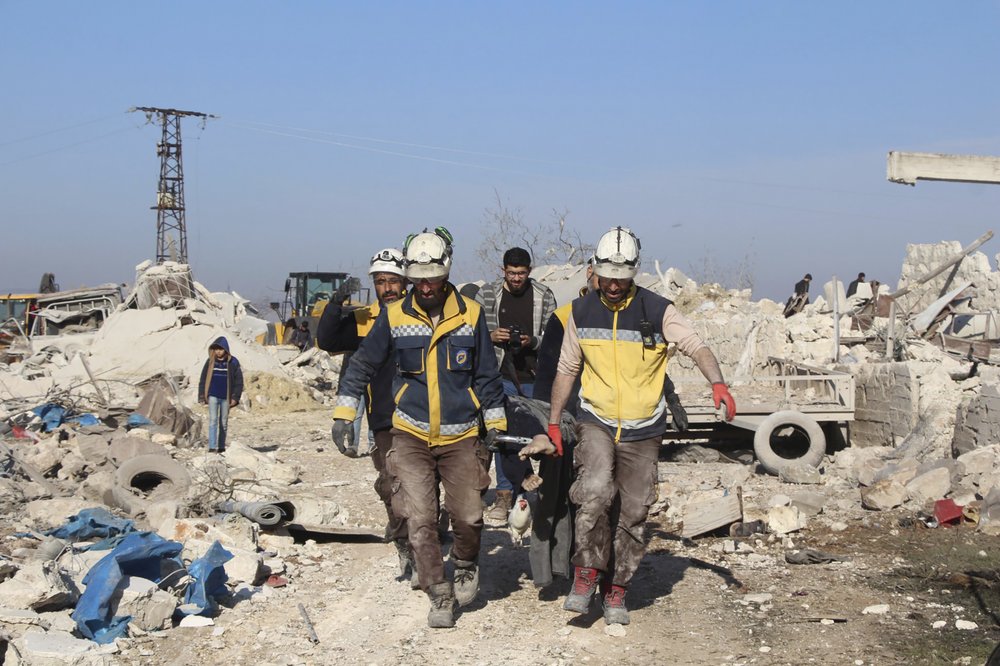 The activists blamed Russian warplanes for the strike on Maaret Musreen village, which is home to thousands of internally displaced people.

The strike came hours ahead of a meeting between Turkish President Recep Tayyip Erdogan and Russian President Vladimir Putin to discuss the escalation in Syria’s northwestern Idlib province, which comes amid a monthslong Russian-backed Syrian government offensive there.

The fighting in Idlib — Syria’s last remaining rebel stronghold — has killed hundreds and displaced nearly a million people, many of whom have fled north toward the border with Turkey.

Turkey and Russia are the two main power brokers in Syria and each supports rival sides in the nine-year conflict.

Violence worsened in Idlib in recent weeks, with Turkey sending thousands of troops into the area to support Syrian insurgents holed up there. But Erdogan hasn’t been able to stop Syrian President Bashar Assad’s offensive, which began in early December.

Syrian and Turkish troops have engaged in deadly battles, leaving at least 58 Turkish soldiers dead since the beginning of February as well as scores of Syrian soldiers.

The Britain-based Syrian Observatory for Human Rights said Thursday’s airstrike hit a poultry farm used a settlement for internally displaced Syrians, killing 15 people including women and children. It said 18 others were wounded.

The opposition’s Syrian Civil Defense, also known as the White Helmets, also blamed Russian warplanes for the strike. They said 14 people were killed, including five women and two children.

Photos of the strike posted by the Civil Defense showed paramedics using a bulldozer to remove a ceiling that had apparently collapsed over people. The group said it had finished recovering bodies from under the rubble by Thursday morning.

Step news agency, an activist collective, said 16 people were killed including five children and also said that 18 people were wounded.

Such discrepancies on casualty figures are not uncommon in the immediate aftermath of attacks in Syria.

Image: In this photo provided by the Syrian Civil Defense White Helmets, which has been authenticated based on its contents and other AP reporting, Syrian White Helmet civil defense workers carry a victim next of destroyed houses hit by Russian airstrikes, in Maaret Musreen village, in Idlib province, Syria, Thursday, March 5, 2020. An airstrike on a rebel-held village in northwestern Syria early Thursday. (Syrian Civil Defense White Helmets via AP)