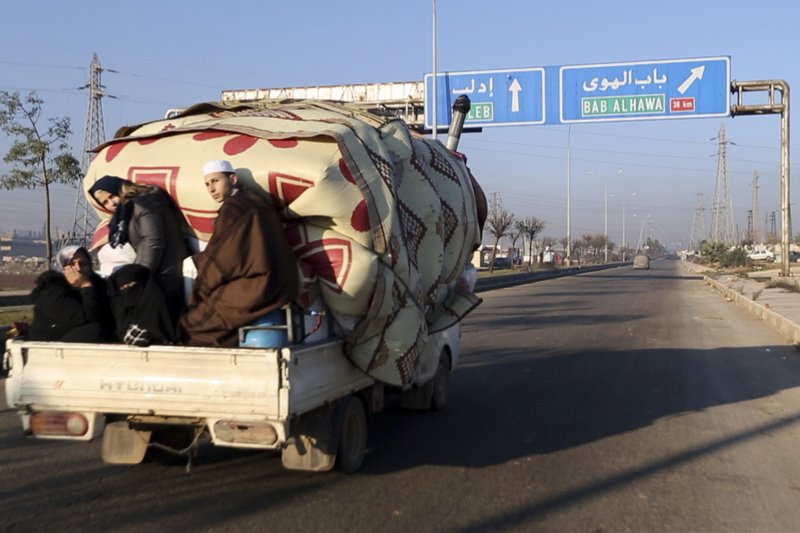 BEIRUT (AP) — An airstrike on a rebel-held village in northern Syria on Tuesday killed at least nine people, including an entire family, Syrian opposition activists said.

The strike on Kfar Taal comes amid a government offensive on the northwestern province of Idlib, the last rebel stronghold in the country, and rebel-held parts of nearby Aleppo province.

A new cessation of hostilities agreement between Russia and Turkey, who support opposite sides in the conflict, went into effect earlier this month. But the violence has continued.

The Britain-based Syrian Observatory for Human Rights and Step news agency, an activist collective, said the nine were killed in Kfar Taal before noon. They said the dead included a family of eight consisting of parents and their six children.

The Observatory and Step blamed Russian warplanes for the strike.

The government offensive has displaced hundreds of thousands of people, many of whom fled to areas closer to the border with Turkey.

Dozens of fighters have been killed on both sides in recent days as clashes intensified.

Idlib province is dominated by al-Qaeda-linked militants. It’s also home to 3 million civilians and the United Nations has warned of the growing risk of a humanitarian catastrophe along the Turkish border.

Image: In this frame grab from video taken on Thursday, Dec. 19, 2019, a family with their goods loaded on a lorry drives towards the Turkish border in Syria’s rebel-controlled Idlib province. The UN says that some 60,000 Idlib residents have been displaced in recent weeks by a government offensive aimed at dislodging the rebels from their last stronghold in the country.(AP Photo/APTN)

Thousands of young Syrians opt to learn Russian at school