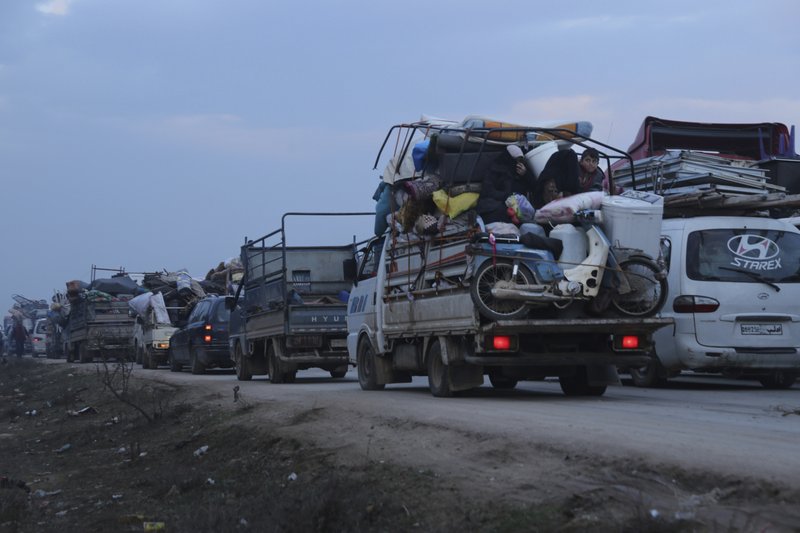 BEIRUT (AP) — Syrian warplanes bombed a major rebel stronghold in the country’s northwest on Friday, less than 24 hours after a cease-fire went into effect there, opposition activists said.

Nevertheless, activists reported an overall drop in violence in Syria’s Idlib province compared to the past three weeks, which saw government forces capture more than two dozen rebel-held villages under the cover of airstrikes. The government offensive forced more than 200,000 people to flee for safer areas further north, near the border with Turkey.

Idlib, which is dominated by al-Qaeda-linked militants, is also home to 3 million civilians. The United Nations has warned of the growing risk of a humanitarian catastrophe along the Turkish border.

The latest cease-fire in Syria’s only remaining rebel stronghold was announced Thursday by Russia’s state media. Turkey and Russia negotiated the truce at Turkey’s request. Russia is a main backer of Syrian President Bashar Assad and his forces, while Turkey backs some Syrian opposition fighters.

Friday’s airstrikes were reported by the Syrian Observatory for Human Rights, which said Russia warplanes executed intensive raids on the strategic rebel-held town of Maaret al-Numan and surrounding villages. The Britain-based organization, which documents the war in Syria through a network of activists on the ground, also said government forces and insurgents clashed in eastern parts of Idlib province Friday morning.

The cease-fire was imposed in Idlib province early Thursday afternoon, according to Maj.-Gen. Yuri Borenkov of the Russian Center for Reconciliation of the Opposing Sides in Syria.

The truce came amid soaring regional tensions between the U.S. and Iran.

Russian President Vladimir Putin also made a rare visit to Syria this week for talks with Assad in Damascus.

The immediate goal of Assad’s three-week offensive appeared to be taking Maaret al-Numan, which sits on the Damascus-Aleppo highway, in order to re-open the strategic road. It’s been closed by the rebels since 2012.