The Ministry of Environment and Al-Azhar launched an initiative dubbed “Our Climate is Our Lives” to support Egypt’s hosting of the upcoming COP27 climate conference, Egyptian Minister of Environment Yasmine Fouad announced.

Fouad praised the Al-Azhar grand sheikh’s speech on climate in the Vatican, saying Al-Azhar has been at the forefront of institutions that showed support for the COP27, which is the largest international multilateral conference touching climate change – a vital issue threatening civilization, and building conscious future generations capable of addressing the effects of climate change.

“Our Climate is Our Lives” encourages the public’s engagement in facing the global challenges of climate change, within the framework of the preparations for hosting the COP27 climate conference and the National Climate Dialogue.

The title of the initiative shows the extent of the impact of the environment, especially climate change, on the daily lives of individuals.

It aims to work to change irrational practices by humans, Fouad said, and also referred to a media campaign launched by the Ministry of Environment dubbed “Back to Nature”, which aims to encourage awareness of ecological balance.

Fouad commended the initiative, saying it is characterized by comprehensiveness, integration and innovation.

Integration between specialists in environmental, climate and Islamic Sharia sciences is planned under the initiative, she said.

It also relies on social media and direct convoys, presenting a distinctive initiative based on the solidarity of all people, and extends beyond the establishment of the COP27 climate conference, Fouad added.

A weekly convoy will be launched for a year, a monthly awareness campaign, 24 workshops, and 100 male and female Islamic preachers will be trained in the field of climate change under the initiative, in cooperation with Al-Azhar International Center for Forensic Astronomy and Space Sciences at the Islamic Research Academy (AIRA), according to Fouad.

The “Our Climate is Our Lives” initiative comes as part of Al-Azhar contribution to Egypt’s National Strategy for Climate Change 2050, through a cooperation protocol between Al-Azhar and the Ministry of Environment, Mohamed al-Duwainy, Undersecretary of Al-Azhar.

The initiative implements a number of programs and activities to raise the awareness of the various segments of the society of the risks of climate change, he added. 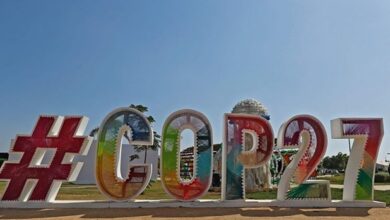