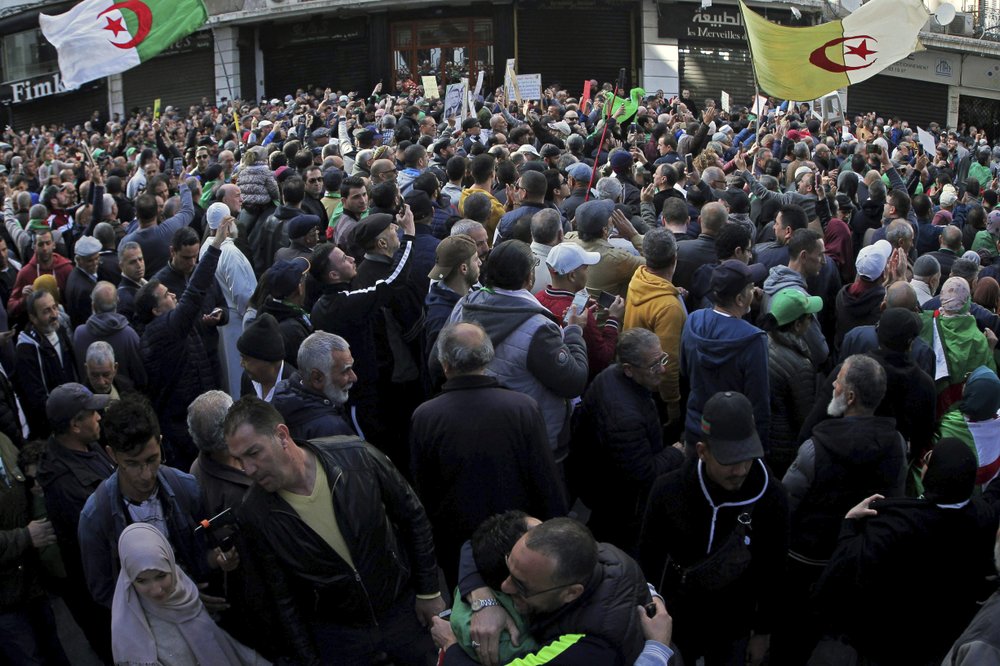 ALGIERS, Algeria (AP) — Algerians flooded into the streets of the capital and other cities on the 53rd straight Friday of peaceful protests, marking the first anniversary of their “smile revolution” that unseated the North African nation’s long-time president.

The revolt also swept aside the former ruler’s powerful entourage and struck hard at the corruption they had bred.

The unprecedented pro-democracy movement is still hoping toupend the whole political establishment, even if the tens of thousands of protesters in Algiers now appear less numerous than in the weeks after Feb. 22, 2019.

As weekly Muslim prayers ended Friday, the main thoroughfares in Algiers filled up with protesters young and old, some calling for freedom for imprisoned protesters or for leaders to step aside.

Police, who have arrested dozens of protesters over the past year, stood watch by their vehicles.

Marchers filled the streets of numerous towns, from Tizi Ouzou, capital of the Kabyle region east of Algiers, to the western port city of Oran.

“A year after the beginning of the Hirak our first demand is still there: We will make sure the entire evil regime leaves,” said protester Hocine Kadide, using the Arabic name of the movement. “We took the streets to take back power and give it to the people, we took the streets to make sure all the corrupt people will fall.”

Africa’s largest nation, whose powerful army has shadowed its rulers — or ruled outright — in an opaque system of governance since independence from France in 1962, is on the cusp of a new era, but there is no certainty about what the future will look like.

Authorities in Algeria, a gas-rich nation that has failed to adequately provide for its booming and youthful population, know they can no longer ignore the citizens they represent.

New President Abdelmadjid Tebboune, once part and parcel of the old guard, recently referred to the “blessed and peaceful popular uprising,” and on Wednesday announced that Feb. 22, when the marches began last year, would be a national holiday. He has also promised deep reforms.

“I have decided to go far with radical change to break with bad practices, give political life morals and change the mode of governance,” Tebboune said in an interview with French Le Figaro daily published Thursday.

He said a promised revamped constitution, with input from outside Algeria’s circles of power, would be put to a referendum and could be in place by this summer.

That was not enough for some protesters, who sang, took photos and kept pushing their demands.

“We didn’t come to celebrate the first anniversary of the Hirak,” the crowd chanted. “We came to get rid of you.”

Pro-democracy movements have sprung up in other Arab countries, notably Lebanon and Egypt, but either they did not endure as long as Algeria’s or were marked by violence.

Algeria, a strategic partner of the West in fighting terrorism, appears set on an inexorable path to change, analysts and activists say.

“Algeria has rediscovered its unity, its dignity,” said Samir Belarbi, 48, who spent more than four months in jail for his involvement in the movement. “The system is collapsing, but the movement must go on, remaining peaceful and joyful until the end — which is a new Algeria.”

“They arrested me thinking they would weaken the (pro-democracy movement) but it’s made up of hundreds of thousands of Algerians … and it continues,” Belarbi said.

The spontaneous protests began with scattered demonstrations in several Algerian towns, filmed and posted on social media. These led to a large demonstration in Algiers, the capital, on Feb. 22, 2019. The trigger was the announcement that then-President Abdelaziz Bouteflika would seek to extend his 20 years in office — despite a 2013 stroke that had left him a nearly invisible leader.

Bouteflika stepped down in April, in the protest movement’s first victory. The powerful army chief, Ahmed Gaid Salah, served as Algeria’s quasi-leader in the ensuing months and ordered a cleanup of top figures including the president’s younger brother, Said Bouteflika, the nation’s two top intelligence chiefs and top industrialists.

Said Bouteflika, who allegedly empowered oligarchs who enriched themselves through corrupt practices, was convicted of plotting against the state and sentenced to 15 years in prison.

Tebboune, once a Bouteflika loyalist, was elected, although protesters abstained. Gaid Salah died less than two weeks later. His funeral was that of a chief of state.

Some experts view the protest movement as a birthing station for a new generation of leaders to replace the old guard and an outmoded conception of governance. They see legislative elections at the end of the year as a prime forum for members of the pro-democracy movement to try to renew the political class from within.

“People know that to change the political scene, it’s not only about protesting,” said Louiza Ait Hammadouche, a political science professor at Algiers University.

“This movement has revolutionized Algerian society,” said a commentator for the daily newspaper Liberte, Mustapha Hamouche. The marches have allowed youth “to discover peaceful debate, the exchange of ideas, everything forbidden by the system,” he said. “These will be the future Algerian leaders. That’s the enormous accomplishment of this movement.”

Protester Saied Chemali echoed the sentiments of many of those in the crowd for the anniversary: “We will be in the street next Friday, and the one after, and the one again after, and we are not tired.”

Image: People take to the streets in the capital Algiers to protest against the government, for the 50th Friday running, in Algeria, Friday, Jan. 31, 2020. (AP Photo/Fateh Guidoum)