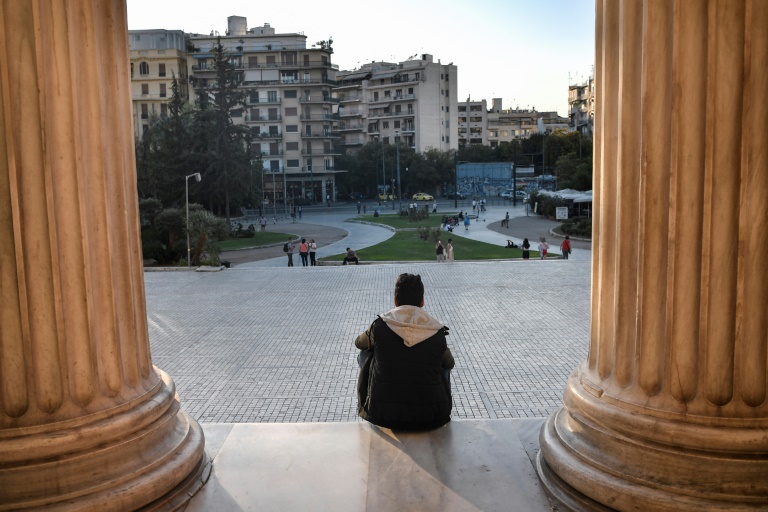 At the notoriously overcrowded Greek island camp of Moria, Ezzatolah Soleimani admits he cries often amid despair, scenes of violence and interminable waits for food and basic sanitation.

The young Afghan is just 16, one of over 4,000 unaccompanied minors trapped in Greece by closed European borders and bureaucratic hurdles, and facing an uncertain future.

“I sleep on a blanket, I do not have a tent as winter approaches,” says the teenager who made the trip alone from Iran, leaving his family behind.

“At night, fights often break out. To go to the bathroom, take a shower, have a meal, I have to wait for hours,” he told AFP during a phone interview.

As an unaccompanied minor, Ezzatolah should have a bed in a Moria section B caravan, where only children are accommodated under the supervision of specialized staff.

But in a camp filled to nearly five times its nominal capacity, there are only 160 safe places for more than 500 young people without families currently in Moria, according to UNICEF.

“Making the journey on my own was very difficult. In Turkey I was beaten several times by the police, I did not always have money to buy food and now I have to face these difficult conditions and wait, always wait,” the boy sighs.

He says that his attempts to see a doctor at the camp have been in vain so far.

Some 8,300 children — 1,600 of them unaccompanied — have been accommodated in overcrowded Aegean islands, the largest number since the beginning of 2016 from January to the end of September, according to the UN High Commissioner for Refugees (UNHCR).

Greek Prime Minister Kyriakos Mitsotakis has called on European countries to share some of the burden.

“It wouldn’t be very difficult for European countries to divide this number and take some of the burden from Greece in managing this problem,” Mitsotakis told AFP in an interview this week.

In May, the Council of Europe urged Athens to ensure that unaccompanied minors are not accommodated in camps or centers unsuitable for vulnerable people.

But five months later, out of 4,600 unaccompanied minors in Greece, only 26 percent live in safe conditions according to UNHCR.

Most minors are held in camps, detention centers, or are homeless, according to the National Center for Social Solidarity, which oversees the management of these minors.

The main danger for these young people is to get caught in criminal networks of sexual exploitation, forced begging, pickpocketing or drug trafficking.

“Neglect and unsanitary conditions in the (camps) push some towards illegality,” says Iraklis Moskoff, the Greek national rapporteur for the fight against human trafficking.

With the help of NGOs and camp staff, Moskoff is trying to identify the victims of these networks so that they can be protected.

“But it’s still very difficult to count them,” he says.

In the camp of Skaramangas near Athens, 17-year-old Ahmed from Syria is losing hope.

For a year and a half, he has tried to reach Sweden where his father and his two brothers live.

But family reunification procedures are too long, he says.

“When you’re a minor, you cannot work legally and it’s very hard to survive. I know some who were tempted to make money in small-scale cannabis smuggling or by selling stolen goods,” he said.

Some children are more fortunate.

Tayebe, a 17-year-old Afghan girl, has been welcomed into a home for young girls and mothers, operated under the care of the NGO Home Project.

The NGO has so far welcomed 400 young people over the past three years in the 11 homes it operates for minors.

In her eight months in Greece, Tayebe has already received a scholarship to study at one of the best private high schools in Athens and dreams of becoming a psychologist.

She says she wants “to help women to emancipate themselves and be free to make their own choices.”

“Others have been beaten, raped, they are often depressed when they arrive here, we try to give them a fresh start,” he says.

“These children have had to deal with so much violence that they cannot be left to their fate,” says Sofia Kouvelaki, director of Home Project.

And with hundreds of new arrivals in Greece per day, the situation is the worst it has been since 2016, she notes.

Image: AFP / LOUISA GOULIAMAKI For a year and a half, Ahmed has tried to reach Sweden where his father and his two brothers live