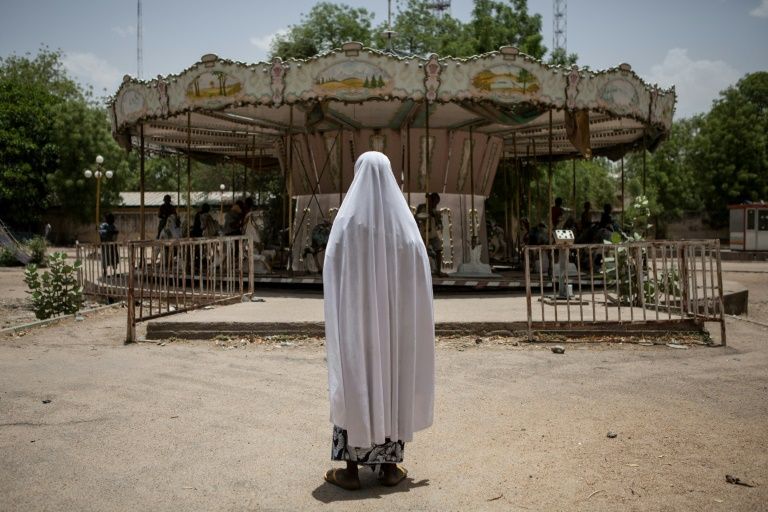 Local officials in Maiduguri face the dilemma of how to get thousands of homeless children back to school in a desperately poor region where education has never been prioritized but is the key to preventing another jihadist uprising.

After a night on the streets, the pack of young boys move into Maiduguri’s abandoned amusement park in the early morning to play on the broken-down rides.

Shoeless and wearing ragged clothes, they sprint to the merry-go-round, its chipped candy-coloured paint bleached by the scorching sun. The horses are motionless but the boys laugh like they’re in Disneyland, forgetting their troubles in a brief moment of joy.

They are among thousands of children orphaned by Boko Haram islamists now living in the capital of Borno state, in northeast Nigeria. “They are internally displaced persons (IDPs) but they are not in camp,” said Salisu Ismail, a 42-year-old who works near the amusement park.

“There is no care for them, so they come here and play. They aren’t supposed to be here, they should be in school but they don’t have any access. It’s really painful to see.” 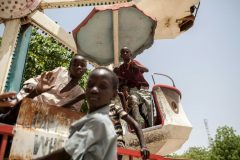 Local officials in Maiduguri face the dilemma of how to get thousands of homeless children back to school in a desperately poor region, where education has never been prioritized but is the key to preventing another jihadist uprising (AFP)

Boko Haram was founded in Maiduguri by a charismatic preacher who advocated a fundamentalist interpretation of the Koran and denounced Western influence in Nigeria.

Rampant poverty, high unemployment and government corruption attracted increasing numbers of followers even before the group turned to violence.

With those factors drivers for radicalisation, officials fear the city will remain a fertile breeding ground for extremism if the masses of orphans aren’t taken care of.

Yet today they face the dilemma of how to get thousands of homeless children back to school in a desperately poor region where education has never been prioritised but is the key to preventing another jihadist uprising.

“We have an official number of over 52,000 orphans in Borno state,” governor Kashim Shettima told AFP.

“Unofficially, the orphans may number over 100,000. Half of them may be in Maiduguri. Without educating these youth, they will be monsters that consume all of us.

Even as the Nigerian army reclaims the last of the territory held by Boko Haram, whose name roughly translated from Hausa means “Western education is sin”, their relentless assault on education continues to restrict development.

In some of the far-flung camps on the border of Niger and Cameroon, where the battle is still raging, there are no schools at all.

In Maiduguri, whose population has doubled to over two million due to those seeking shelter from the conflict, thousands of children are slipping through the cracks.

“A lot of children have never been to school,” said UNICEF child protection specialist Samuel Manyok

“It’s as bad as (the situation in) Somalia and South Sudan combined.”

Getting children whose lives have been shattered by Boko Haram into class is just one hurdle to reintegrating them back into society when many have suffered traumatizing experiences.

Sitting at a concrete table in the amusement park, 15-year-old Aisha — not her real name — says she was the only one of her family to survive when Boko Haram invaded her village in 2015.

When her parents refused to let her marry a Boko Haram fighter, the militants shot her father “on the spot” and tossed her mother into a makeshift prison full of urine and feces. Days later and starving, she finally let her daughter go. “He forced himself on me,” Aisha said of her new husband with whom she lived in Sambisa Forest, Boko Haram’s stronghold in Borno state.

“He would bring bombs and tell me to pour water on them, so they wouldn’t explode.”

Wearing a white hijab with two ruby studs in her nose and a wary look in her eyes, Aisha says she saw militants strapping explosives to young girls and boys.

The rebels gave them 50,000 naira ($158, 145 euros) for their families and told them they would go to heaven. If they refused to blow themselves up, they would be shot, she said.

In December, the Nigerian military invaded Sambisa Forest and rescued Aisha. She now lives with a man from her village in an IDP camp in Maiduguri.

But she isn’t going to school. Asked what she wants to do in the future, she doesn’t seem to know. “Clothes make me happy,” she eventually replies.

Schools were only officially reopened in Maiduguri and accessible areas of Borno state late last year after closing down in 2014.

Hundreds of others across the state are waiting to be rebuilt after being destroyed by Boko Haram.

To address the orphan crisis, Shettima’s goal is to build “20 mega-schools across the state”. His government has also floated plans to build a massive orphanage for 8,000 children.

Whether construction begins depends on how much the Borno government receives from the federal government, a notoriously unreliable benefactor.

It is also counting on the generosity and courage of international donors.

“The destruction of schools, the displacement and loss of school years, and the abduction of school children has reduced the level of access to education in a safe environment,” said Oge Chukwudozie, manager of humanitarian organization Plan International Nigeria. 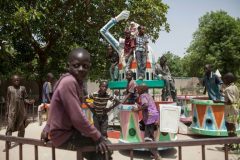 In Maiduguri, Nigeria, children orphaned by Boko Haram islamists play on a spinning wheel at an abandoned amusement park. The local population has doubled to over two million as a result of Boko Haram’s insurgency, creating thousands of homeless children there (AFP)

“Given that the crisis directly targeted schools, non-government organizations had to play it safe so that children will not be exposed to direct attack by Boko Haram.”

Nigeria’s government is unlikely to resolve the school shortage quickly. But without urgent intervention, the risk of renewed violence increases.

“They need a second chance at life,” said UNICEF’s Manyok. “Otherwise they [will] become a destabilizing factor. It’s just a time bomb.”