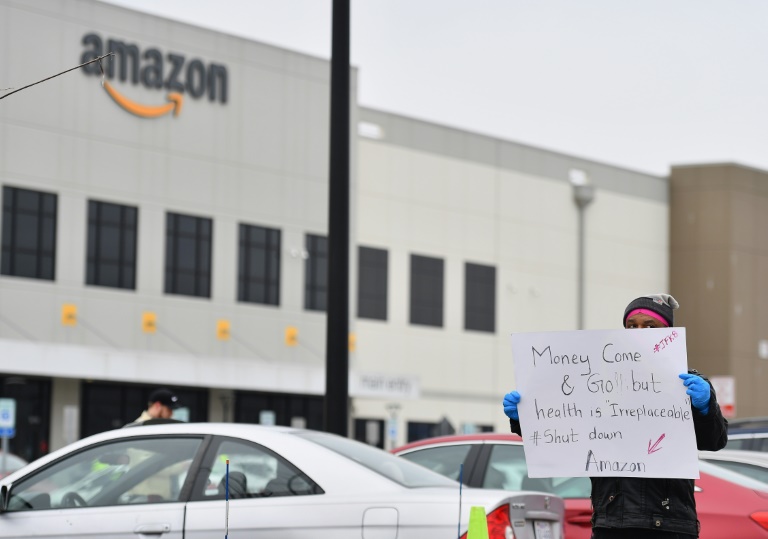 As Amazon becomes an increasingly important lifeline in the pandemic crisis, it is being hit with a wave of criticism from activists, politicians and others who question the tech giant’s growing influence.

Amazon has become the most scrutinized company during the health emergency.

It has boosted its global workforce to nearly one million and dealt with protests over warehouse safety and reported deaths of several employees.

But Amazon has also pledged to spend at least $4 billion in the current quarter — its entire expected operating profit — on coronavirus mitigation efforts, including relief contributions and funding research.

Amazon’s AWS cloud computing unit, which powers big portions of the internet, is also a key element during the crisis with more people and companies working online.

Amazon’s market value has hovered near record levels around $1.2 trillion dollars as it reported rising revenues and lower profits in the past quarter.

“Its sheer size justifies the scrutiny,” said Dania Rajendra of the activist group Athena, a coalition which is focused specifically on Amazon’s corporate activity and treatment of workers.

Athena activists fret that Amazon, which also controls one of the major streaming television services, infiltrates so many aspects of people’s lives.

Rankling many activists, the rise in Amazon’s shares has boosted the wealth of founder and chief executive Jeff Bezos to over $140 billion even as the global economy has been battered by the virus outbreak.

Amazon has faced employee walkouts at several facilities over safety and hazard pay and has been accused of firing people for speaking out against the company.

“It’s a minority going on strike but the sentiment represents thousand if not hundreds of thousands,” said Steve Smith of the California Labor Federation.

While Amazon has boosted base pay to $15 an hour, above the minimum wage required, and added bonuses during the pandemic, activists say it’s insufficient, especially in high-cost states like California.

The tensions have spilled over into the US capital Washington and elsewhere. US lawmakers leading antitrust investigations asked Bezos to respond to reports that the company improperly used data from third-party sellers to launch its own products, which the company has denied.

In a statement to AFP, Amazon defended its actions on workplace safety, social distancing and noted that it is implementing its own employee testing program.

The company also disputed claims it was stifling employee speech.

Spokeswoman Lisa Levandowski said the employees in question were dismissed “not for talking publicly about working conditions or safety, but rather, for repeatedly violating internal policies.”

Levandowski added that Amazon already provides what many unions have been seeking, including a high base wage, health benefits and career opportunities.

“She said the company seeks “a great employment experience” along with offering “a world-class customer experience (while) respecting rights to choose a union.”

Analyst Patrick Moorhead of Moor Insights & Strategy said Amazon is getting heightened scrutiny because of its growing global influence and because of the wast wealth of Bezos.

Moorhead said Amazon also brought on some of its woes with its highly public search for a second headquarters which highlighted tax breaks for the tech giant.

But Moorhead said Amazon is “not profiting” from the coronavirus crisis, and should be credited for some 150 measures taken including the pooling of high-performance computing for researchers.

“If you think about the alternative of shutting down Amazon, so many people wouldn’t get the supplies that they need. You’d have a tremendous number of people unemployed,” he said.

Image: AFP/File / Angela Weiss Amazon warehouses have been the site of worker protests as the company’s role to meet consumer demands during the pandemic has risen