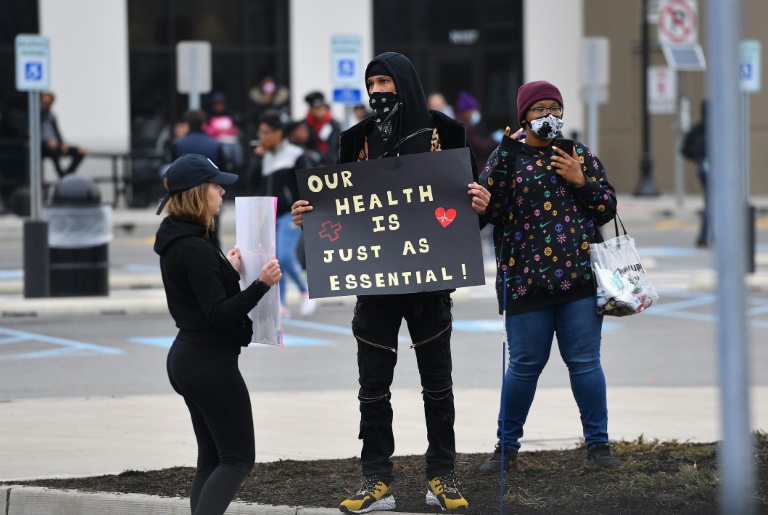 Amazon warehouse employees and Instacart delivery workers joined protests Monday to press safety demands, highlighting the risks for workers on the front lines of supplying Americans largely sheltering at home due to the COVID-19 pandemic.

An estimated 50 to 60 employees joined a walkout at an Amazon worker warehouse in the New York borough of Staten Island, demanding that the facility be shut down and cleaned after a worker tested positive for the coronavirus.

Amazon, responding to an AFP query, said Smalls made “misleading” statements about conditions and that he was supposed to be in quarantine.

“Like all businesses grappling with the ongoing coronavirus pandemic, we are working hard to keep employees safe while serving communities and the most vulnerable,” Amazon said in a statement.

“We have taken extreme measures to keep people safe.”

After the protest, Smalls was officially fired by Amazon.

When contacted by AFP for comment, Amazon confirmed the decision, which it said was due to Smalls’s failure to comply with the company’s request that he self-isolate after he came in contact with another employee who tested positive for COVID-19.

By taking part in Monday’s demonstration, he put “the teams at risk. This is unacceptable,” Amazon said in a statement, noting that only 15 of the more than 5,000 employees at the site had taken part in the protest.

“At a time when so many New Yorkers are struggling and are deeply concerned about their safety, this action was also immoral and inhumane,” she said in a statement.

James said she was exploring options for legal recourse and had asked the National Labor Relations Board to investigate the incident.

Meanwhile a group calling itself the Gig Workers Collective said it was maintaining its call for Instacart’s independent contractors to strike despite new safety measures announced late Sunday by the company.

“Workers aren’t filling orders until our full demands are met,” a spokesperson told AFP. “This isn’t just about us, we want to also protect our customers.”

It was not immediately clear how many of Instacart “shoppers” who are independent “gig” workers, were participating in the stoppage.

Instacart, which recently announced plans to hire some 300,000 people to help meet demand for grocery delivery, said in a statement it was “fully operational” and that the walkout caused “no impact.”

“We’re continuing to see the highest customer demand in Instacart history and have more active shoppers on our platform today than ever before picking and delivering groceries for millions of consumers,” said the San Francisco company, which operates in some 5,500 cities in the US and Canada.

The firm said Sunday it would provide additional health and safety supplies to full-service “shoppers” and would set a “default” tip based on customers’ prior orders.

The labor group, whose numbers were not known, called the Instacart moves “a sick joke.”

“We had been asking for hand sanitizer for many, many weeks. But apparently the company is capable of sourcing some with two days of work? Where was this before,” the group said in a Medium post.

A separate group of workers at the Amazon-owned grocery chain Whole Foods meanwhile called for a one-day stoppage or “sickout” on Tuesday to press demands for improved health measures.

The group calling itself “Whole Worker” said it was seeking guaranteed paid leave for quarantined workers, among other things.

With much of the US population locked down, Americans are increasingly relying on delivery of food and other supplies from firms like Amazon.

A report by NBC News said Amazon workers at two Southern California warehouses had presented demands to shut down the facilities for two weeks for sterilization while employees are tested for the virus.

Amazon has announced plans to hire an additional 100,000 people in the US, while rival Walmart is seeking to expand its workforce by 150,000.

Image: AFP / Angela Weiss Amazon workers at Amazon’s Staten Island warehouse stage a walkout to demand that the facility be shut down and cleaned after one staffer tested positive for the coronavirus

Amazon pledges to be carbon neutral by 2040