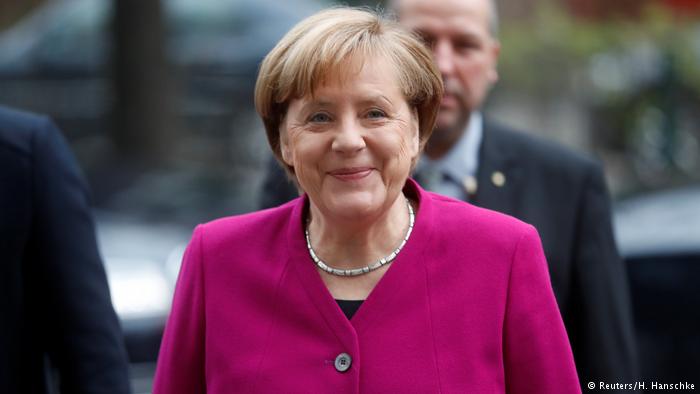 Germany’s Angela Merkel has said she is optimistic about forging a deal with the Social Democrats to form a new “grand coalition” government. However, all leaders agreed that the new era requires a new political style.

German Chancellor Angela Merkel assured that her Christian Democrats (CDU) would “work very swiftly and very intensively” at forming a new coalition with the Social Democrats (SPD), as preliminary negotiations got underway in Berlin on Sunday.

“I think that it can be done,” said the chancellor as she walked in for talks with SPD leader Martin Schulz and Horst Seehofer, the leader of Merkel’s Bavarian sister party, the Christian Social Union (CSU).

Although Merkel’s conservative CDU/CSU bloc has run Germany with the SPD as a junior partner for eight of the past 12 years, the three leaders vowed on Sunday that new government needed a new style of politics.

Speaking to reporters on Sunday evening after talks had concluded for the day, Lars Klingbeil of the SPD said: “The three party leaders made it clear in their opening statements that given the election results, we can’t just go on as before.”

Klingbeil added: “The global political situation, the situation in Europe, the composition of the German Bundestag, all that show that we find ourselves in a new era. And this new era needs new politics.”

Those feelings were echoed by German Foreign Minister Sigmar Gabriel (SPD), who on Sunday evening said that Europe had to be at the center of a new coalition agreement between Merkel’s conservative Union and the Social Democrats.

Speaking to German broadcaster ARD, Gabriel said that the parties had made the mistake in 2013 of placing too much emphasis on domestic policy and not enough on Europe. It was finally time to respond French President Emmanuel Macron’s proposals for the European Union, Germany’s top diplomat said — something Schulz has endorsed as part of his calls for a common European constitutional treaty by 2025.

However, Germany’s vision of a future Europe and attitude to towards Macron’s proposals remain a major sticking point in the talks, alongside immigrationand a proposed compulsory state health insurance scheme.

While Merkel expressed her optimism, the Social Democrats adopted a more constructive tone following the talks as they hope to drive a hard bargain to extract key concessions, despite their own weakened negotiating position.

“We’re not drawing any red lines, but we want as many red policies in Germany implemented as possible,” Schulz said, in a reference to the SPD’s party color.

Michael Groschek, a negotiator for the Social Democrats, insisted that the coalition talks were “open-ended” and that the party would also tolerate a minority government if talks were to break down — an unprecedented event in modern German political history.

The SPD had initially pledged to go into opposition after picking up a historically low 20.5-percent share of the vote in September.

However, after Merkel’s first attempt to form a ruling coalition government with the Free Democrats (FDP) and Green Party failed back in November, another coalition with the SPD remains the only feasible option open to the chancellor, aside from the never-before-used option of a minority government.

German parties at odds ahead of coalition talks

2018: The year of Brexit decisions