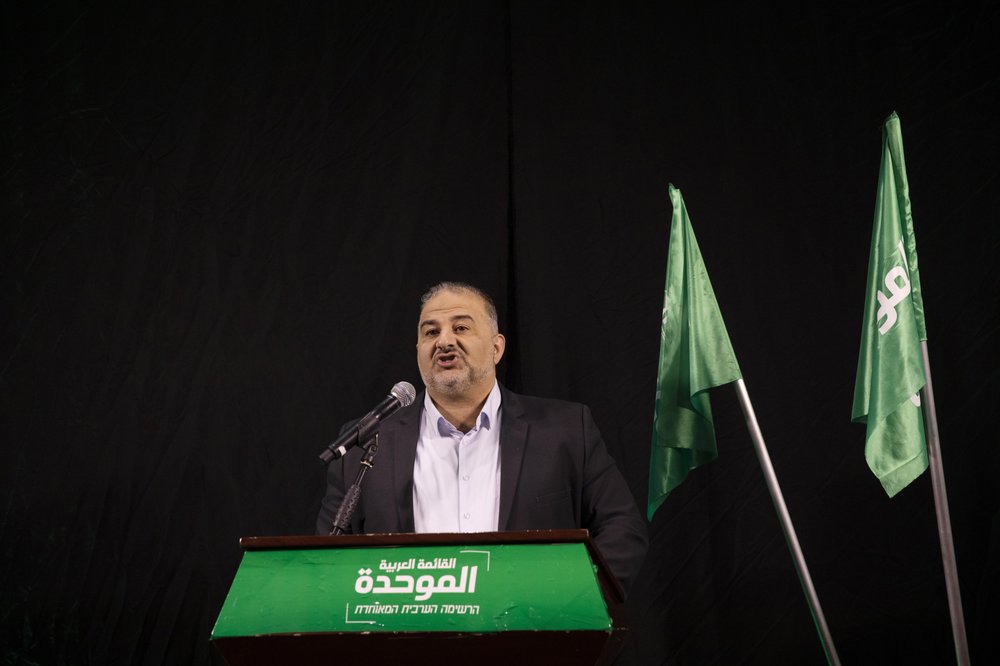 JERUSALEM (AP) — The leader of an Arab Islamist party in Israel delivered a prime-time address in Hebrew on Thursday that was carried live by major TV networks, calling for coexistence between Arabs and Jews in a stunning display of the community’s newfound political influence.

Israelis have been keeping a close eye on his meetings and public statements since the March 23 election.

In Thursday’s closely watched speech, he did not commit to either side. Instead, he presented “a vision of peace, mutual security, partnership and tolerance” in the search for common ground between Islam, Christianity and Judaism, and between Arabs and Jews.

“The time has arrived to listen to the other, to recognize the narratives and to look for what we have in common,” he said in fluent Hebrew, speaking against a backdrop of green flags in the northern city of Nazareth.

The color green is often associated with Islam. Abbas’ party represents a more pragmatic faction of Israel’s Islamic Movement, which was inspired by the pan-Arab Muslim Brotherhood.

He also called for an end to violence based on ethnicity, religion or political views. He pointedly avoided endorsing any of the contenders seeking to be the next prime minister and said his focus was on the problems plaguing the Arab community, such as violent crime and lack of opportunity.

“I don’t want to be part of a bloc, on the right or left. I am here as another bloc, the bloc that elected me to serve my people and gave me the mandate to present the demands of the Arab public,” he said.

Arabs make up around 20 percent of Israel’s population of 9.3 million. They have citizenship, including the right to vote, but have long faced discrimination in housing and public services. They have close family ties to the Palestinians in the occupied West Bank and Gaza and largely identify with the Palestinian cause, leading many Israeli Jews to view them with suspicion.

In the last election, in March 2020, an alliance of Arab parties known as the Joint List, which included Abbas’ faction, won a record 15 seats. It tried, unsuccessfully, to help oust Netanyahu, who has a history of incendiary rhetoric toward the Arab minority.

This time around, Abbas broke with the other Arab parties and said he would be open to partnering with right-wing leaders, including Netanyahu, if it meant he could secure gains for the Arab community such as increased funding for law enforcement and infrastructure.

Netanyahu has left the door open. But that could be difficult given the pro-Netanyahu bloc’s reliance on a far-right party that includes an openly racist faction. The Religious Zionist Party has already ruled out sitting in a government with Abbas.

No Arab party has ever asked or been invited to sit in an Israeli government, but Abbas’ faction or the reduced Joint List could provide support from outside that would allow a government to be formed.

In last week’s election, neither the pro-Netanyahu or anti-Netanyahu blocs of Jewish parties captured a majority of seats in the 120-member Knesset, Israel’s parliament.

On Monday, the country’s largely ceremonial president will begin consulting with the 13 parties elected to parliament, asking each one to recommend a candidate to form a new coalition government.

At the end of the consultations, President Reuven Rivlin will designate the candidate he believes has the best chance of cobbling together a parliamentary majority.

That means Abbas could play a key role in determining who is the next prime minister or whether the country plunges into an unprecedented fifth consecutive election campaign.

Israel’s dilemma: Can the unvaccinated return to workplaces?