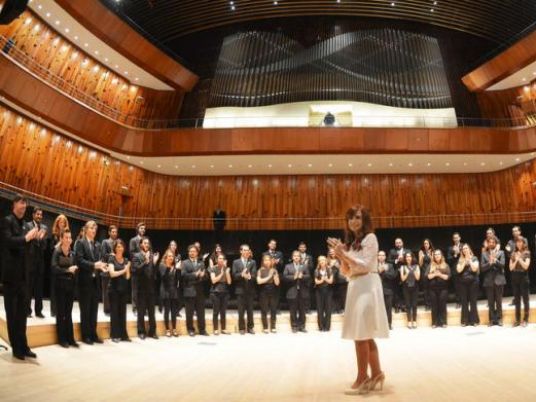 With less than a year to go in her presidency, Cristina Fernandez has sought her place in Argentina's cultural history, unveiling Latin America's largest arts complex, housed in Buenos Aires's historic former Post and Telegraph Palace.

The neoclassical building, revamped by local architects, boasts more than 100,000 square meters (1.08 million square feet). It has no permanent art collection, but will stage exhibits, concerts and shows. Critics have called it an above-budget vanity project.

Entry will be free to ensure it is a space for "the people," in stark contrast to Argentina's famous Teatro Colon opera house where tickets reach above $100, a princely sum for most Argentines.

"Classical music until a few years ago used to be directed to the elite," Planning Minister Julio de Vido told reporters, a day after the official inauguration by Fernandez. "From the beginning we wanted this cultural center to have the Argentine working class as its protagonist."

The grandiose building, originally opened in 1928 during the city's golden era when Buenos Aires was coined the "Paris of South America," for a while housed the offices of fabled first lady Eva Peron.

After falling into disrepair following the privatization of the postal service in the neo-liberal 1990s, it was earmarked for rejuvenation in the 2000s after Kirchner set about re-nationalizing key industries.

Located near the recently converted docks, the cultural center is being touted as a symbol of the combined 12-year left-wing rule of power-couple Kirchner and Fernandez.

Architects have conserved many original details reminiscent of a bygone era, such as the vast wooden counters postal workers once stood behind, hanging clocks and mural paintings of the world geography.

Fernandez will step down in December, constitutionally barred from running for a third term.

"Our national and popular model …will continue sustaining this space for all sectors of Argentine society, especially for the poor to have access to culture, but also for them to express themselves," de Vido said.