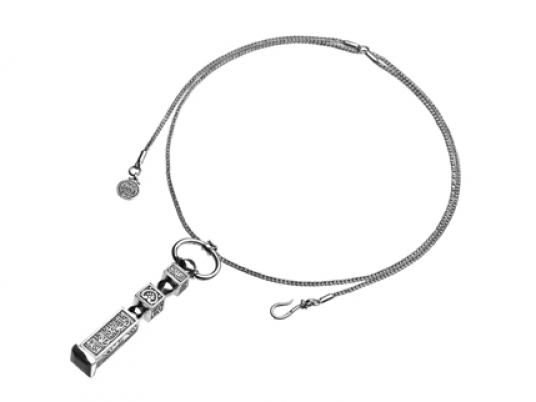 Designer Azza Fahmy will soon be exhibiting a nine-piece jewelry collection at the British Museum in London that makes use of religious symbolism to convey Islamic ideas.

The collection, which is to be displayed in the Grenville Room store at the museum from 26 January, forms part of Fahmy’s upcoming exhibition "Hajj: journey to the heart of Islam."

The exhibition will describe the pilgrimage to Mecca, explaining the trip as one of the pillars of Islam, while pointing to the spiritual benefits of the journey. The collection aims to convey to non-Muslims the importance of the pilgrimage for Mulims.

“International collaborations have been a focus of our PR strategy to build the brand over the past few years, says Indji Hosny, the public relations director for the Azza Fahmy empire. "With the British Museum, we are taking it to a new level in terms of positioning Azza Fahmy as a homegrown design house that creates art and is expanding internationally.”

In the new works, she uses a mix of sterling silver and gold in depicting objects relating to pilgrimage from the Arabic and Islamic cultures. The items are adorned with calligraphy and semi-precious stones.

One necklace carries a pillar-like pendant, featuring calligraphy that reads: "If God closes a door, He opens a thousand others." At the top of the pillar is engraved the word "saada" (happiness).

Another necklace carries a "zamzameya" (water flask) pendant, with the word "zamzam" (holy water) engraved on it in gold. Zamzam is traditionally considered to have healing powers.

The third remarkable piece is a bracelet with engravings of Islamic shapes and calligraphy that reads "Mercy, serenity, and satisfaction," in addition to the the sayings, "If God closes a door, He opens a thousand others," and "Be kind to your enemies as well as your friends." The design of the jewelry is inspired by old engravings in mosques, geometrical and plant-like shapes and the textiles used to cover the Kaaba.

In addition to being both innovative and rooted in historical culture, the new collection serves as further confirmation that one can never mistake an Azza Fahmy piece.