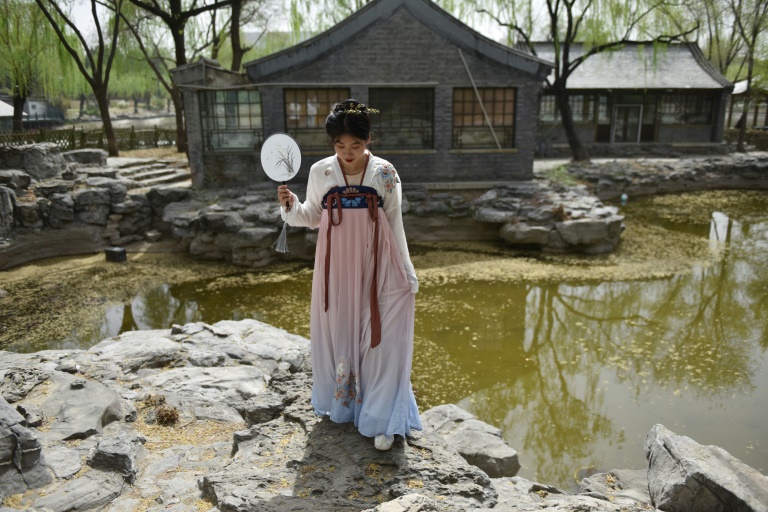 Dressed in a flowing long robe adorned with beaded floral embroidery from a bygone era, stylist Xiao Hang looks like she surfaced from a time machine as she strides across the bustling Beijing metro, attracting curious glances and inquisitive questions.

China has embraced Western fashion and futuristic technology as its economy boomed in recent decades, but a growing number of young people like Xiao are looking to the past for their sartorial choices and donning traditional “hanfu”, or “Han clothing”.

These historic costumes of the Han ethnic majority are enjoying a renaissance in part because the government is promoting traditional culture in a bid to boost patriotism and national identity.

Period dramas have also contributed to the surge in interest for traditional Chinese garb — “The Story of Minglan”, a TV series set in the Song Dynasty, garnered more than 400 million viewers in three days when it debuted earlier this year.

AFP / GREG BAKER China has embraced Western fashion and futuristic technology as its economy boomed in recent decades, but a growing number of young people are opting for sartorial gems from the past

There is no uniform definition of what counts as hanfu since each Han-dominated dynasty had its own style, but the outfits are characterised by loose, flowing robes that drape around the body, with sleeves that hang down to the knees.

“When we were little, we would also drape sheets and duvets around ourselves to pretend we were wearing beautiful clothes,” Xiao told AFP.

Xiao, who used to work at a state-owned machine manufacturing company, now runs her own hanfu business, where she dresses customers for photo shoots and even plans hanfu-style weddings.

In modern China, the hanfu community spans the gamut: from history enthusiasts to anime fans, to students and even young professionals.

Yang Jiaming, a high school student in Beijing, wears his outfit under his school uniform.

“Two-thirds of my wardrobe is hanfu,” he said, decked out in a Tang-style beige gown and black boots at a hanfu gathering, adding that his classmates and teachers have been supportive of his style.

A government-supported revival in Chinese culture has given the hanfu community a boost: since he entered office in 2012, President Xi Jinping has supported the idea of promoting a Han-centric version of heritage.

In April, the Communist Youth League of China launched a two-day conference for traditional Chinese garb, including hanfu.

A live broadcast of the event drew some 20 million viewers, alongside a visceral outpouring of emotions.

“Chinese people have abandoned their own culture and chosen Western culture. The red marriage gown has now become a wedding dress,” wrote on user on Bilibili, a video streaming platform popular among young anime, comic and gaming fans in China.

Clothes are the “foundation of culture,” said Jiang Xue, who is part of Beijing-based hanfu club Mowutianxia, which has received funding from the Communist Youth League.

“If we as a people and as a country do not even understand our traditional clothing or don’t wear them, how can we talk about other essential parts of our culture?” she said.

There is some way before the style reaches mainstream acceptance in China.

In March, two students in Shijiazhuang Medical College in northern China were reportedly threatened with expulsion for wearing the outfits to school.

Others say they’re deterred by the odd looks they get when wearing hanfu in public.

AFP / GREG BAKER In modern China, the hanfu community spans the gamut: from history enthusiasts to anime fans, to students and even young professionals

“I used to be very embarrassed to wear (hanfu) out,” screenwriter Cheng Xia told AFP.

The 37-year-old said she overcame her reservations after going out dressed in a full outfit last year.

Meanwhile, the movement to revive Han ethnic clothing is raising questions about nationalism and Han-ethnocentrism –- a sensitive issue in China where the government is wary of any inter-ethnic conflict.

For instance, within the hanfu community, there is long-running opposition towards the qipao, the high-collared, figure-hugging garment that used to be a staple of women’s wardrobes.

Also known as cheongsam in Cantonese, the qipao — meaning “Qi robe” — began as a long, loose dress worn by the Manchus or “Qi” people who ruled China from the 17th century to the early 1900s.

Its popularity took off in 1920s Shanghai when it was modified into a fitted must-have, favoured by actresses and intellectuals as a symbol of femininity and refinement.

“Some people… think that the cheongsam was inspired in the Qing Dynasty, which is not enough to represent China. There are nationalist undertones in this issue,” said Chinese culture scholar Gong Pengcheng.

“It is a good trend to explore traditional culture and clothing culture… There are many things we can talk about, and we need not shrink to nationalist confrontation.”

He said: “At the very least, we can wear our own traditional clothes, just like the ethnic minorities.”