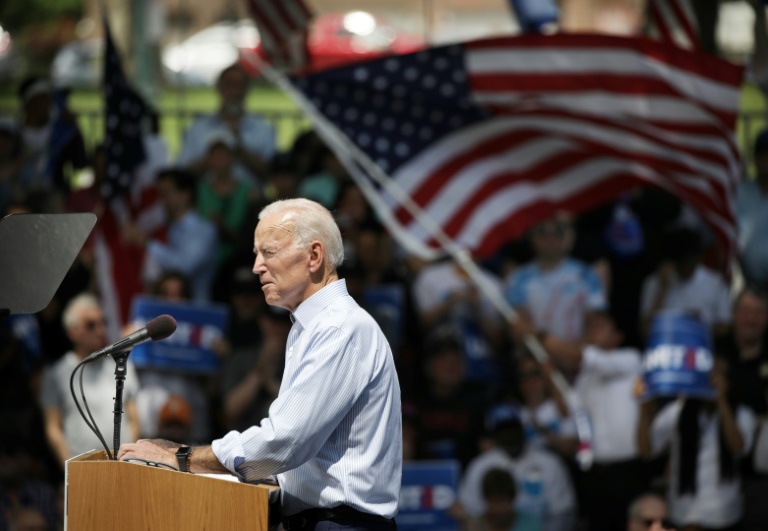 Democrat Joe Biden made a passionate appeal for national unity Saturday but also took square political aim at Donald Trump, branding the president a “divider in chief” who must be ousted in 2020.

At a boisterous rally in Philadelphia, the former vice president urged voters to end the mean-spirited pettiness and partisan squabbles that have left Americans angry and dispirited in recent years.

“This nation needs to come together,” the veteran politician told a crowd estimated at 6,000 in Philadelphia, in the largest rally of his nascent campaign.

“Our president is the divider in chief,” he added, accusing Trump of demonizing opponents and using scapegoats to fuel animosity.

“If the American people want a president to add to our division, to lead with a clenched fist, closed hand and a hard heart, to demonize opponents and spew hatred, they don’t need me,” Biden said in a raised voice. “They’ve got President Donald Trump.”

Biden, 76, came to Washington in a less polarized era, and he cited his work across the aisle during his 36 years in the US Senate to assure Democrats that “compromise is not a dirty word” and can lead to successes going forward.

The number two to popular president Barack Obama is now making his third White House bid, and relishes his prime position atop the pack of 2020 Democratic contenders.

But the party eminence appeared to ignore the primary jockeying with his Democratic rivals and cast his eye directly at the general election battle against Trump.

After a month of more modest events, the large-scale rally in Pennsylvania’s largest city highlighted the importance Democrats place on winning back the swing state that Trump snatched in 2016.

Biden was born and raised in Scranton, Pennsylvania, and the sun-splashed downtown event was a nod to his modest roots.

But far from being the underdog, Biden is looking to cement his status as the man to beat.

He is a blue-collar voter whisperer who claims he is best positioned to defeat Trump. But Biden must also balance the concern that while he is the most experienced candidate out there, he embodies the Washington insider cachet that many voters rejected in 2016 when they chose Trump over former secretary of state Hillary Clinton.

“Maybe he’s a little bit establishment, but he was always Joe from Scranton,” Mickey Kirzecky, a health care consultant who attended the rally, told AFP.

“He still has that, and I think that’s going to be tough for Trump to fight.”

Polls give Biden a growing lead over the 22 other hopefuls.

The latest RealClearPolitics aggregate puts him at 39.1 percent support, more than double the 16.4 percent of his nearest rival, liberal Senator Bernie Sanders.

No one else is in double digits.

As voters start paying more attention, Biden — who to date has campaigned mostly in broad strokes — will be under pressure to flesh out policies on everything from health care and wages to immigration.

Next month he will be expected to provide details on multiple positions — and engage his party rivals more directly — when Democrats gather for their first televised debate of the 2020 season.

Biden has already called for a clean energy “revolution,” and in his Saturday speech assured that he supports the traditional Democratic goals of protecting voting rights and broadening access to health care.

But Biden warned that none of those goals could be achieved should Trump secure another four years in the White House.

“If you want to know what the first and most important plan in my climate proposal is: Beat Trump,” he said. “Beat Trump. Beat Trump.”

Even as some supporters encourage Biden to take the high road, the Democrat displayed a willingness for confrontation as he said the president “embraces dictators and tyrants like (Vladimir) Putin and Kim Jong Un.”

Biden has aligned himself closely with Obama, drawing support from African-American voters, and he went out of his way Saturday to praise Obama’s “courage,” character and vision.

In doing so he took another swipe at the current Republican president, who has routinely boasted about the well-performing US economy.

“President Trump inherited an economy from the Obama/Biden administration that was given to him, just like he inherited everything else in his life,” he said.

Biden styles himself, like Trump, as an ardent defender of working class Americans, someone who can win back the Midwestern, white, male blue-collar voters who went for the Republican in 2016.

Trump has insisted he does not see Biden “as a threat.”

But he has bestowed a negative nickname on his rival — “Sleepy Joe” — and scheduled a campaign rally for Monday in northern Pennsylvania, near Scranton.

Image: AFP / Dominick Reuter Former US vice president Joe Biden speaks during the first major rally of his presidential campaign in Philadelphia, Pennsylvania on May 18, 2019

Biden, in public and private, tiptoes toward a 2020 run