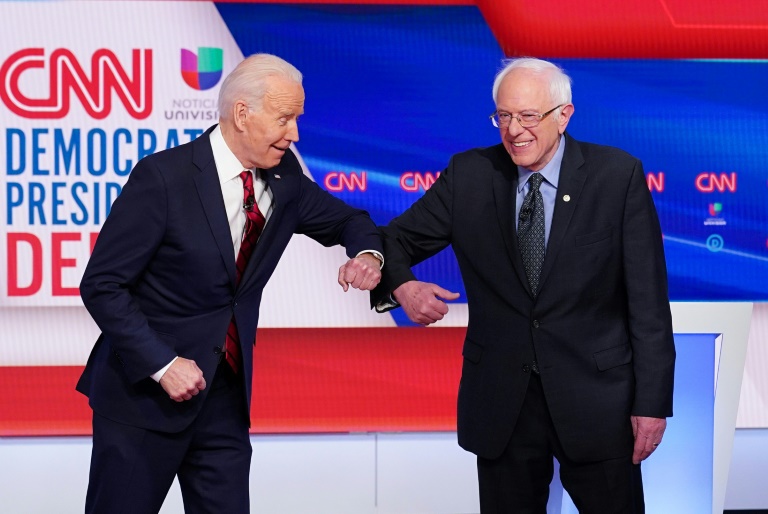 White House hopefuls Joe Biden and rival Bernie Sanders launched a joint attack on Donald Trump’s response to the coronavirus pandemic as they faced off in high-stakes debate Sunday, accusing the president of undermining his own scientists with misinformation.

Going head to head days before four large states hold Democratic primaries, the two main candidates left in the marathon race stood six feet (1.8 meters) apart on stage and elbow bumped one another at the start of a televised debate held with no live audience.

Sanders, the 78-year-old underdog who needs a strong showing Tuesday in order to keep his White House dreams alive, took a stinging shot at the president, accusing him of fomenting confusion and eroding the all-important trust in government institutions in the time of crisis.

“We have to shut this president up right now because he’s undermining the doctors and the scientists who are trying to help the American people,” Sanders added, referring to multiple statements by Trump that have been at odds with expert views.

“It is unacceptable for him to be blabbering unfactual information that is harming the American public.”

With their first one-on-one debate overshadowed by the fast-moving health crisis, Biden and Sanders spent the first 10 minutes solely on how to address the pandemic which has already led to at least 60 deaths and more than 3,000 coronavirus cases in the country.

“We’re at war with the virus,” Biden said.

“I would call out the military. Now,” he added, warning that the Department of Defense and the Federal Emergency Management Agency must step in immediately to dramatically expand the number of intensive care beds.

“The present system can not handle the surge that is likely to come,” he said.

Sanders too called for “aggressively” ramping up testing but also for expanding the safety net to make sure Americans are not pushed deeper into economic crisis due to coronavirus.

“What happens if I’m sick? It’s going to cost thousands of dollars for treatment. Who is going to feed my kids?” Sanders said, putting himself in the shoes of a workingclass parent.

This 11th Democratic debate has placed the most intense spotlight yet on the duel between the former vice president and the leftist US senator from Vermont.

The debate was moved from Arizona, one of the four states holding a primary on Tuesday, to national capital Washington to avoid trans-national travel by the candidates and their teams.

Also voting Tuesday are Florida, Illinois and Ohio, three of the country’s most populous states, with large troves of Democratic delegates at stake.

All four states decided to go ahead with their primaries despite concerns about the virus.

Both Biden and Sanders have had to cancel planned rallies, and on Sunday they acknowledged shifting from live rallies to televised or online events — and that they are both taking precautions to avoid getting infected.

Scrapping live events could pose a particular handicap to Sanders, who has consistently mobilized large and enthusiastic crowds at his campaign events.

Sanders may find one advantage. The coronavirus crisis has exposed some of the vulnerabilities he often denounces in the US health system as he calls for the federal Medicare system to be expanded to cover all Americans.

The pandemic “exposes the incredible weakness and dysfunction of our current healthcare system,” Sanders said.

The 77-year-old Biden, after a near-calamitous start to the primary season, has staged a spectacular comeback.

He appears in the driver’s seat as he seeks to expand his lead in the race for the delegates who formally pick the nominee at the party convention in July.

And the big states voting Tuesday, which all show Biden with double-digit leads in polling, should help him consolidate his lead, particularly in delegate-rich Florida, where he holds a 40-point advantage.

Sanders was the campaign’s putative leader just weeks ago, but he is the clear underdog now.

Yet the senator hardly seems ready to throw in the towel, despite a stinging series of defeats last week including in the Midwest industrial bastion of Michigan.

For some, Sanders’ continued campaign was a way he could gain a last bit of leverage before finally dropping out — to help advance elements of his “political revolution” and bring some of his progressive ideas more firmly into the party’s political mainstream.

Biden has extended a hand towards his more liberal rivals’ supporters, saying that “together” Democrats will beat Trump.

Image: AFP / MANDEL NGAN Democratic presidential hopefuls former US vice president Joe Biden (L) and Senator Bernie Sanders greeted each other with an elbow bump at the start of the Democratic Party 2020 presidential debate in Washington on March 15, 2020

Biden says fighting for US 'soul' after big primary wins

Biden and Sanders win key endorsements as next voting round nears