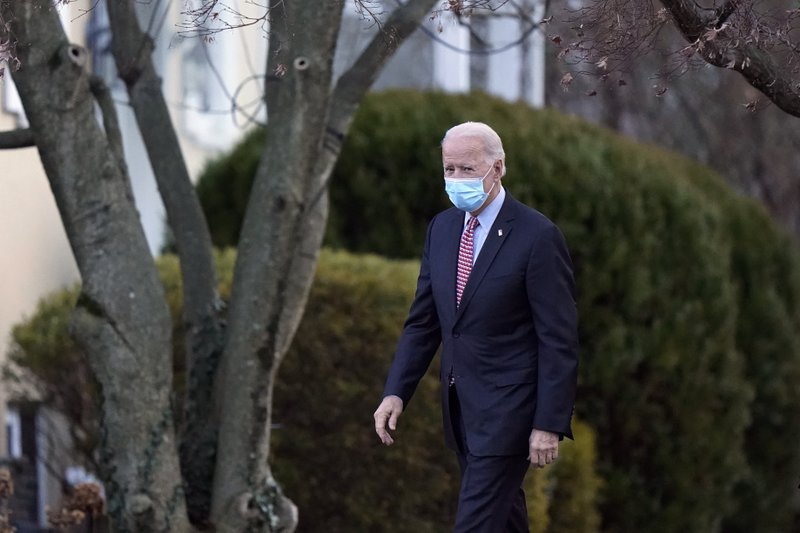 SAN DIEGO (AP) — President-elect Joe Biden’s decision to immediately ask Congress to offer legal status to an estimated 11 million people in the country has surprised advocates given how the issue has long divided Democrats and Republicans, even within their own parties.

Biden will announce legislation his first day in office to provide a path to citizenship for millions of immigrants in the United States illegally, according to four people briefed on his plans.

The president-elect campaigned on a path to citizenship for the roughly 11 million people in the US illegally, but it was unclear how quickly he would move while wrestling with the coronavirus pandemic, the economy and other priorities. For advocates, memories were fresh of presidential candidate Barack Obama pledging an immigration bill his first year in office, in 2009, but not tackling the issue until his second term.

Biden’s plan is the polar opposite of Donald Trump, whose successful 2016 presidential campaign rested in part on curbing or stopping illegal immigration.

“This really does represent a historic shift from Trump’s anti-immigrant agenda that recognizes that all of the undocumented immigrants that are currently in the United States should be placed on a path to citizenship,” said Marielena Hincapie, executive director of the National Immigration Law Center, who was briefed on the bill.

If successful, the legislation would be the biggest move toward granting status to people in the country illegally since President Ronald Reagan bestowed amnesty on nearly three million people in 1986. Legislative efforts to overhaul immigration policy failed in 2007 and 2013.

Ron Klain, Biden’s incoming chief of staff, said Saturday that Biden will send an immigration bill to Congress “on his first day in office.” He didn’t elaborate and Biden’s office declined to comment on specifics.

Advocates were briefed in recent days on the bill’s broad outlines by Esther Olivarria, deputy director for immigration on the White House Domestic Policy Council.

Domingo Garcia, former president of the League of Latin American Citizens, said Biden told advocates on a call Thursday that Trump’s impeachment trial in the Senate may delay consideration of the bill and that they shouldn’t count on passage within 100 days.

“I was pleasantly surprised that they were going to take quick action because we got the same promises from Obama, who got elected in ’08, and he totally failed,” Garcia said.

Ali Noorani, president of the National Immigration Forum and among those briefed Thursday night, said immigrants would be put on an eight-year path to citizenship. There would be a faster track for those in the Deferred Action for Childhood Arrivals program, which shields people from deportation who came to the country as young children, and Temporary Protected Status, which gives temporary status to hundreds of thousands of people from strife-torn countries, many from El Salvador.

Vice President-elect Kamala Harris offered similar remarks in an interview with Univision that aired Tuesday, saying DACA and TPS recipients will “automatically get green cards” while others would be on an eight-year path to citizenship.

More favorable attitudes toward immigration — especially among Democrats — may weigh in Biden’s favor this time. A Gallup survey last year found that 34% of those polled favored more immigration, up from 21% in 2016 and higher than any time since it began asking the question in 1965. The survey found 77% felt immigration was good for the country on the whole, up slightly from 72% in 2016.

Noorani said the separation of more than 5,000 children from the parents at the border, which peaked in 2018, alienated voters from Trump’s policies, particularly conservatives and evangelicals. He believes a constantly shifting outlook for DACA recipients also hurt Trump among people who felt he was using them as “political pawns.”

“What was seared in their mind was family separation. They took it out on the Republican Party in 2018 and they took it out on Trump in 2020,” Noorani said. “To put a really fine point on it, they want to end the cruelty of the Trump administration.”

It is impossible to know precisely how many people are in the country illegally. Pew Research Center estimates there were 10.5 million in 2017, down from an all-time high of 12.2 million in 2007.

The Homeland Security Department estimates there were 12 million people in the country illegally in 2015, nearly 80% of them for more than 10 years. More than half were Mexican.

Biden: We’ll ‘manage the hell’ out of feds’ COVID response