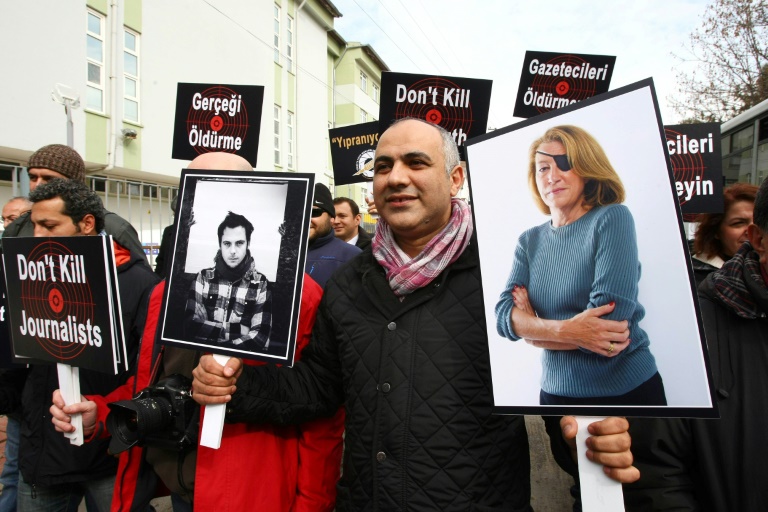 A biopic of war correspondent Marie Colvin, who died in Syria in 2012, is a celebration of journalism as it increasingly comes “under attack”, according to the film-makers.

“A Private War”, released in US cinemas next month, chronicles the harrowing career of Colvin — played by “Gone Girl” star Rosamund Pike — who was an award-winning journalist for Britain’s The Sunday Times.

The feature film debut of director Matthew Heineman — an Oscar nominee in 2016 for his documentary “Cartel Land” — shows the reporter’s struggles to cope with the impact of reporting from the world’s conflict zones.

For Heineman, whose mother was a journalist, it is a “homage” to both Colvin and an increasingly besieged profession.

“It’s so important right now in this world of fake news and soundbites, where journalists are under attack, to celebrate journalism and to celebrate people like Marie,” he told AFP at a London Film Festival screening Saturday.

The movie, which got its world premiere in Toronto last month, hits screens as reporters face ever more threats, from US President Donald Trump labeling them “the enemy” to the killing this month of dissident journalist Jamal Khashoggi.

“This is a film about telling the truth,” he told AFP on the red carpet. “Anything that can try to show true journalism in its finest light — the people who will go to these places to risk everything to tell us the truth — that’s a good thing.”

American Colvin died aged 56, alongside French photographer Remi Ochlik, in an alleged government bombardment of a media center in the war-ravaged Syrian city of Homs.

“A Private War”, adapted from a Vanity Fair article following her death, depicts her decades-spanning career and the psychological and physical toll it took on her.

It captures Colvin losing the sight of one eye — leading to her wearing a signature eyepatch — while covering Sri Lanka’s civil war, and interviewing former Libyan dictator Moamer Kadhafi shortly before his death in 2011.

The film also shows her retreating into heavy drinking and battling likely post-traumatic stress disorder in between assignments.

Oscar-nominated Pike said she was attracted to the part by Colvin’s complexity.

“I wanted to put a woman out there on the screen who is admirable but not every quality she has is admirable,” she told AFP.

“There was something about… the fierceness of passion in what she did that I related to.”

Photographer Conroy, who was injured by the bombing that killed Colvin but made a full recovery, said he was eager to advise on the film in part because of Heineman’s background in documentaries.

“His idea of the truth carried through from that — it wasn’t just ‘lets make this frothy Hollywood film’,” he said at the screening. “The attention to detail is extraordinary.”

Heineman said he spent months researching the story, including watching practically every war film ever made.

He also enlisted locals rather than actors to play the parts of extras in the war zones portrayed.

“That was really important to me to try to bring an authenticity to this experience.”

The director said making “City of Ghosts”, a 2017 non-fiction film about a Syrian media activist group in Raqqa, and other conflict-driven documentaries helped him emphathise with Colvin.

“I just felt enormous kinship with her, and also her desire to put a human face to poor innocent civilians who are caught in the crossfire of these geo-political conflicts,” he added.