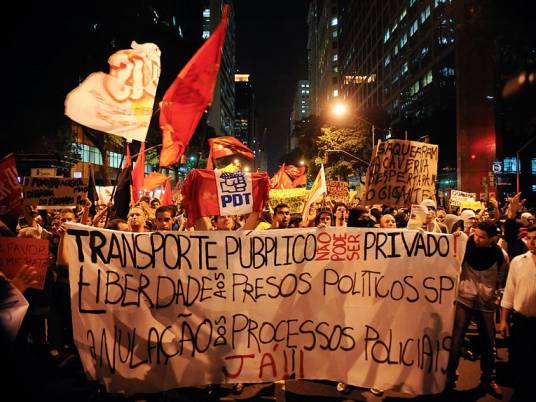 The collapse of two dams at a Brazilian mine has cut off drinking water for quarter of a million people and saturated waterways downstream with dense orange sediment that could wreck the ecosystem for years to come.
Nine people were killed, 19 are still listed as missing and 500 people were displaced from their homes when the dams burst at an iron ore mine in southeastern Brazil on November 5.
The sheer volume of water disgorged by the dams and laden with mineral waste across nearly 500 km is staggering: 60 million cubic meters, the equivalent of 25,000 Olympic swimming pools or the volume carried by about 187 oil tankers.
President Dilma Rousseff compared the damage to the 2010 oil spill by BP PLC in the Gulf of Mexico and Environment Minister Izabella Teixeira called it an "environmental catastrophe."
Scientists say the sediment, which may contain chemicals used by the mine to reduce iron ore impurities, could alter the course of streams as they harden, reduce oxygen levels in the water and diminish the fertility of riverbanks and farmland where floodwater passed.
Samarco Mineração SA, a joint venture between mining giants Vale SA and BHP Billiton and owner of the mine, has repeatedly said the mud is not toxic.
But biologists and environmental experts disagree. Local authorities have ordered families rescued from the flood to wash thoroughly and dispose of clothes that came in contact with the mud.
"It's already clear wildlife is being killed by this mud," said Klemens Laschesfki, professor of geosciences at the Federal University of Minas Gerais. "To say the mud is not a health risk is overly simplistic."
As the heavy mud hardens, Laschesfki says, it will make farming difficult. And so much silt will settle along the bottom of the Rio Doce and the tributaries that carried the mud there that the very course of watershed could change.
"Many regions will never be the same," he says.
Researchers are testing the river water and results should be published over the coming weeks, giving a better idea of the contents of the mining waste.
One cause for concern is that compounds known as ether amines could have been used at the mine to separate silica from the iron ore, in order to produce a better quality product.
According to mining industry research and scientific literature published in recent years, the compounds are commonly used at Brazilian mines, including Samarco's.
At least some of the compounds, according to the website of Air Products, a company that produces them, "are not readily biodegradable and have high toxicity to aquatic organisms." They can also raise PH levels to a point that is environmentally harmful.
"There will be serious problems using the water from the river now," says Pedro Antonio Molinas, a water resources engineer and mining industry consultant familiar with the region.
Samarco did not respond to questions about whether it used the compounds or whether they were in the so-called tailings pond whose contents burst through the broken dams.
'Sweet river'
The disaster is the latest assault on the Rio Doce, or "Sweet River", one of the main routes connecting mineral-rich Minas Gerais state with the Atlantic Ocean.
Once lined with thick rainforest and populated by indigenous tribes, the waterway has long suffered because of ravenous demand for the minerals nearby.
So synonymous is it with the mining industry that Vale, which means "valley" in Portuguese, refers to the land through which the river runs. Before a name change in 2007, the miner was formally known as the Vale of the Rio Doce Company.
Its banks now barren, and bed full of silt, the river grew prone to flooding with heavy rains that over the years devastated communities along its more than 800 km course.
More recently it was plagued by drought.
On Thursday, the river running a reddish brown, farmhands moved livestock away from its banks, afraid to let cattle drink the water. At a picnic table, Nilo Candido da Silva, 74, said he never saw devastation on this scale during a life spent by the river.
"I don't think I'll ever see it go back to normal," said Silva, gazing at thick mud and shredded trees where last week the river rose but now just a brown trickle flows. A fish lay dead in the mud.
As the mud flows toward the ocean, environmentalists fear its impact on the coast too.
"Who had the brilliant idea of opening the dams along the river?" asked marine biologist Andre Ruschi in a Facebook post, referring to the decision by authorities to open dams along the Rio Doce to allow the surge to dissipate and proceed toward the ocean.
The mouth of the Rio Doce is a nesting area for endangered sea turtles, an animal sensitive to chemical changes in the water. The beaches are expected to turn a deep red.
"It's a huge shock for nature," said Professor David Zee, an expert in oceanography and the environment at the State University in Rio de Janeiro.