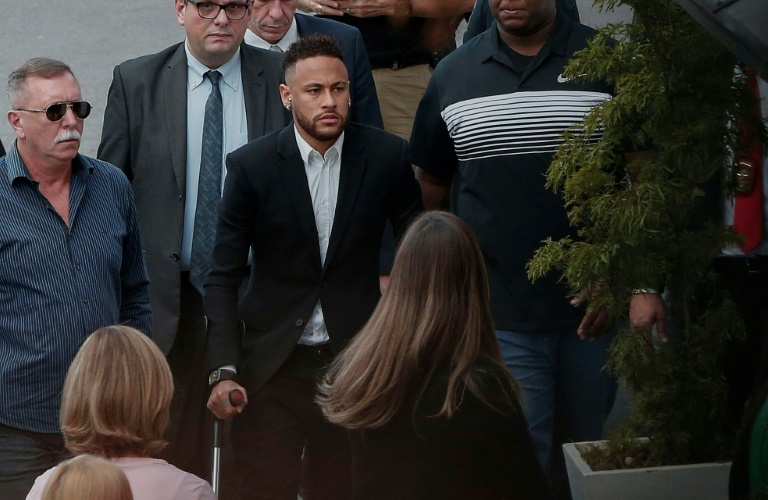 Brazilian police questioned Neymar for five hours on Thursday over allegations he raped a woman he met through social media in a Paris hotel last month — charges he has denied.

“The truth appears sooner or later,” the world’s most expensive footballer, who walked on crutches after injuring his right ankle in a pre-Copa America friendly against Qatar last week that forced him out of South America’s showcase tournament, told reporters.

Neymar’s appearance comes after Brazilian police said Thursday they had filed a defamation suit against his rape accuser for insinuating the force was corrupt.

During an interview with television channel SBT this week, Najila Trindade said: “The police are bought, aren’t they? Or am I crazy?”, in response to questions over the police investigation of an alleged theft of a tablet device from her home that contained a short video she claims has conclusive evidence she was assaulted.

The ugly affair has dominated headlines in Brazil as it prepares to host the Copa America and tarnished the festive atmosphere ahead of Friday’s opening game between the Selecao and Bolivia.

Neymar, who plays for Paris Saint-Germain, previously gave a statement to Rio de Janeiro police over WhatsApp messages posted on his Instagram account that featured intimate photos of Trindade.

He told police that an assistant and a technician were responsible for sharing the messages and photos, TV Globo reported previously.

More than 60 percent of Brazilians believe Neymar is innocent, according to a recent poll of 2,071 people last week.

Only 14 percent think he is guilty, Parana Pesquisas said.