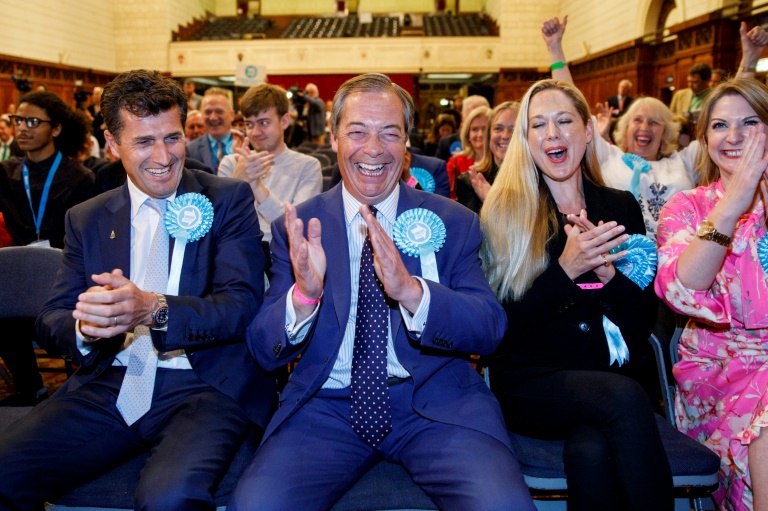 The populist party, founded just three months ago, capitalized on public anger over delays to Britain’s exit from the European Union, winning 31.6 percent of the vote and picking up 29 seats, final results showed.

In a sign of the divisions still gripping Britain three years after the referendum vote for Brexit, the pro-European Liberal Democrats and Greens also made significant gains.

The elections, which took place on Thursday, were never meant to happen, as Britain was due to be out of the bloc on March 29.

But parliament has been unable to agree on how to leave, slowly sapping May’s authority and forcing her to finally announce last week she would quit to let somebody else try.

Describing the result as “very disappointing”, she said: “It shows the importance of finding a Brexit deal, and I sincerely hope these results focus minds in parliament.”

Several of those vying to replace her, including Boris Johnson, were quick to repeat that Brexit must happen by the latest deadline, October 31, with or without a deal with Brussels.

“No one sensible would aim exclusively for a no-deal outcome. No one responsible would take no-deal off the table,” Johnson wrote in his weekly column in The Daily Telegraph.

In Sunderland, a Brexit-backing area in northeast England, several voters voiced support for a no-deal Brexit following the results.

It was also a bad night for the main opposition Labor party, which has been accused of a confusing position on Brexit and slumped to 14.1 percent.

Farage only registered his party in February but succeeded in leveraging his reputation as one of the masterminds of the pro-Brexit campaign in 2016.

“If we don’t leave on October 31, then the Brexit Party will go on to a general election and stun everybody there too,” Farage told reporters in London on Monday.

He said his party should now have a say in any new Brexit negotiations with Brussels.

The EU has said it will not re-open the withdrawal deal already agreed with May, but many of her would-be successors are still likely to try.

Anti-Brexit campaigners also hailed the success of parties who want to keep Britain in the EU, suggesting voters are as split as they were when they voted 52 to 48 percent to leave three years ago.

The Liberal Democrats came second with around 20.3 percent and 16 MEPs, up from just one MEP in the last European elections in 2014.

The Greens, who campaigned on an anti-Brexit ticket as well as for action on climate change, won seven seats with 12.1 percent of the vote.

Adding in votes for the Scottish National Party and Plaid Cymru in Wales, both of which want a second referendum, supporters saw a resounding victory for pro-EU forces.

“There will almost certainly be a referendum now and we’ve got to win that,” Lib Dem leader Vince Cable told AFP at an event with the party’s new MEPs on Monday.

Analysts, however, warned that European election results cannot be easily translated into success at British parliamentary elections, not least because a different voting system is used.

May’s bickering Conservative party had been braced for poor results and barely bothered to campaign.

But it must now decide what to do about the long-suffering EU withdrawal deal May reached with Brussels last year.

Parliament was on course to reject the pact, intended to smooth Britain’s exit, for a fourth time before May announced she was quitting.

Despite the calls for a “no deal” Brexit, MPs have repeatedly voted against that option, fearing the economic impact of a harsh break with Britain’s closest trading partner.

And May’s Finance Minister Philip Hammond warned on Sunday he might even be prepared to take the drastic step of voting to bring down a future Conservative government in order to avoid that situation.

Image: AFP / TOLGA AKMEN Farage (center) said his party should now have a say in any new Brexit negotiations with Brussels

UK leadership hopefuls vow to succeed where May failed on Brexit