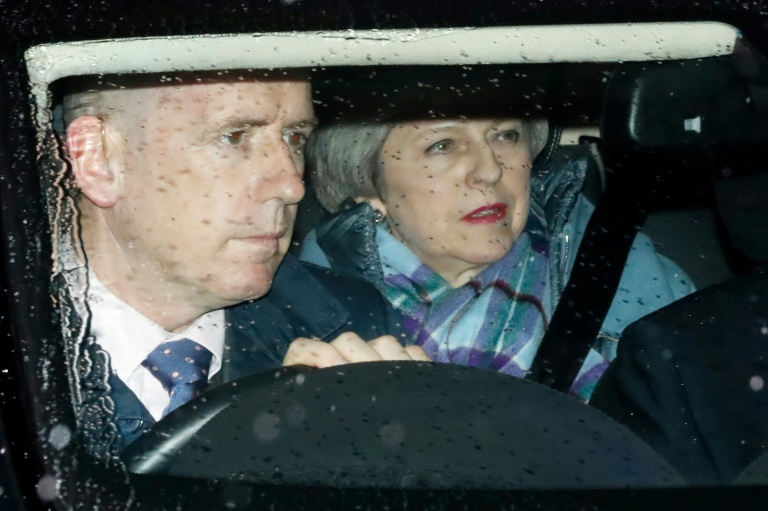 British Prime Minister Theresa May pinned her hopes on persuading Brussels to rewrite the Brexit divorce deal but EU leaders insisted Wednesday they would not budge.

Having comprehensively rejected the withdrawal agreement last month, MPs late Tuesday backed an amendment saying they would support the deal if its controversial “backstop” clause concerning the Irish border was removed.

Bolstered by the mandate from parliament, May made the decision to revisit a pact she herself sealed with the 27 EU leaders at a summit last month.

With Britain otherwise on course for a chaotic exit from the bloc on March 29, May admitted she faces a formidable challenge convincing Brussels to re-open an accord that took 18 excruciating months to conclude.

And there was no sign that European leaders were prepared to unpick the backstop in order to salvage the deal.

A spokesman for EU Council President Donald Tusk swiftly insisted the Brexit deal was “not open for renegotiation”.

On Wednesday, the EU’s chief Brexit negotiator Michel Barnier reiterated: “The position of the European Union is very clear”.

German Foreign Minister Heiko Maas told the Funke media group that the existing draft deal was “the best and only solution for an orderly exit”.

The backstop insurance policy could legally lock the UK into EU trade rules indefinitely in order to keep the Irish border free-flowing.

Guy Verhofstadt, who heads the European Parliament’s six-member Brexit steering group, said the backstop clause was “absolutely needed” and there was hardly room to change the deal.

Going further, Philippe Lamberts, who is on the group, told BBC radio that hard Brexiteers were “believing in a mirage”.

“There will be a price to pay, but the calculus made on this side of the Channel is the price of hurting the integrity of the single market will be bigger, and if we have a choice to make between two evils, then no deal is the lesser evil,” he said.

‘Throw of the dice’

The pound “has not collapsed into oblivion because… we are not yet at the no-deal do-or-die moment,” said Neil Wilson, chief market analyst at Markets.com.

Carolyn Fairbairn, who heads the Confederation of British Industry main business lobby group, said: “I don’t think there will be a single business stopping or halting their no-deal planning because of last night’s Brexit vote. Renegotiation is a throw of the dice. It must succeed or fail fast.”

The winning amendment calls for the backstop to be replaced with “alternative arrangements to avoid a hard border” — vague wording that did not pin May to any specific approach.

Britain’s Brexit Secretary Stephen Barclay said “the dynamic did change” with the vote, but offered no specifics on what the alternative arrangements might involve, saying London was looking at technological solutions, time limits and exit clauses.

Elsewhere in Tuesday’s votes, MPs also backed a non-binding measure that “rejects the United Kingdom leaving the European Union without a withdrawal agreement”.

But they threw out another plan — backed by EU supporters — that would have tried to force through a Brexit delay if no new deal with the EU emerged by February 26.

“I agree that we should not leave without a deal. However, simply opposing no-deal is not enough to stop it,” May told MPs.

She said parliament’s approval of the backstop amendment gave her the “mandate” to “seek to obtain legally binding changes to the withdrawal agreement”.

May promised to give MPs a chance to vote on what happens next on February 14 should she fail to win a new agreement over the course of the next two weeks.

May was due to talk on Wednesday with Tusk and Irish Prime Minister Leo Varadkar, and face MPs in her weekly questions session in parliament.

Main opposition Labour leader Jeremy Corbyn sat out cross-party Brexit talks ahead of the vote but will now meet May on Wednesday to discuss the way ahead.

European Commission president Jean-Claude Juncker was due to make a statement to the European Parliament later on Wednesday.

Irish Foreign Minister Simon Coveney said he hoped the backstop would “never be used”, or would be quickly replaced by a new trade agreement.

But he said in a tweet that the backstop was “necessary” and the vote in London would “do nothing to change this”.

May seeks to revise Brexit deal but EU rules out changes