It’s easy for a visitor to New York City to jam their itineraries with many fine things–the Empire State Building, the Statue of Liberty, Times Square, Central Park. And, while all of this island life has its own worth–climbing through Lady Liberty’s guts to peer from her crown is a great chance to imitate an amoeba, as is waiting in line for the pleasure of doing so–these tourists all too often leave the city having missed the best of New York: Brooklyn.

Brooklyn’s beachfront is undergoing a slow, arduous, and not altogether welcomed renovation, but this block of Surf Avenue retains its glory as one of the city’s weirdest, though its advantage may be unfair. Among those employed on the Coney Island thoroughfare are Donny Vomit, Bambi the Mermaid, and Angelica, a fire eating, blade regurgitating, whip snapping woman with tattoos covering most of her 5’4’’ body, face included. All are employed by the Coney Island Circus Sideshow–one of the country’s last remaining traditional “sideshows” employing politically incorrect “freaks” you can “shoot”—which, housed in a small auditorium on Surf Avenue, includes a barker paid for his obnoxious cat-calling in the summertime. Also close by is the river and the original Nathan’s Hot Dog stand; both are filthy and should not be missed.

One of the most pleasant places to fritter away away a few hours, theBrooklyn Botanic Garden, along with the Brooklyn Museum, is found along this traffic stretch. The nearby Prospect Park might offer more greenery for a lower price (free, as opposed to US$8), but, with constant picnics, softball games, joggers and bikers, it’s not quite as calming as the garden’s pruned areas. In the springtime, the BBG celebrates the blooming of its many cherry blossoms with a festival, but winter is also a good time to go; a moment in a greenhouse is good for warming cold bones, and is cheaper than a spa.

This Brooklyn neighborhood is often likened to a college campus, and not because of any ongoing scholarship. The populations of young transplants who have infiltrated the area freeze time in one perpetual game of kickball and render the living spaces–railroads, tenements, and condos alike–dorms, temporary but seminal. However you might feel about this Dorian Gray area, there’s no denying that there’s a lot to do in Williamsburg. See music at the Music Hall of Williamsburg, probably the borough’s most well-attended venue. It’s also a short walk from the water, where numerous brittle and broken dock like structures make for a fun game of post-show hopscotch.

Not technically a “block,” walking this stretch is mandatory, and not just because it means you’re leaving Manhattan. The sloping wooden promenade, the large American flag-topped arches, and the shimmering river will instill in even the most cynical tourist a feeling of awe. And when you’ve crossed it, there is pizza. 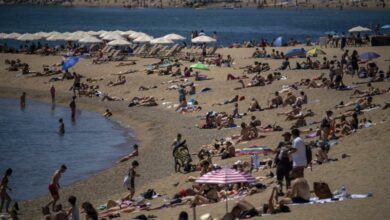