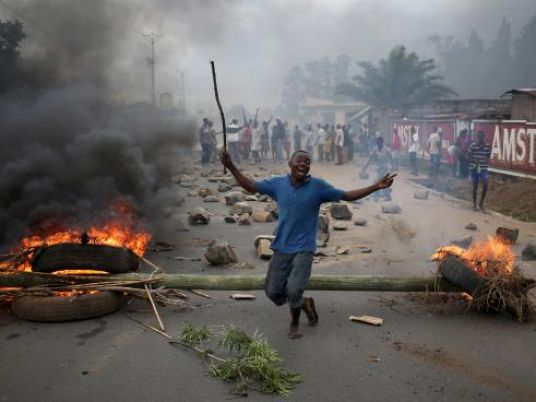 The UN human rights chief on Tuesday warned that Burundi could be sliding back towards civil war, days after scores of bodies were found on the streets following attacks on three military sites.

A spokeswoman for Zeid Ra'ad Al Hussein said the rights chief was "deeply alarmed by the latest developments in Burundi's unfolding crisis."

"With this latest series of bloody events, the country seems to have taken a new step towards outright civil war and tensions are now at bursting point in Bujumbura," spokeswoman Cecile Pouilly told reporters, quoting Zeid.

The central African nation on Friday experienced the worst violence in months of unrest over President Pierre Nkurunziza's quest for a third term in office, which he won in disputed July elections.

The army said 79 "enemies" and eight soldiers were killed during and after coordinated assaults on three military installations.

Several witnesses in pro-opposition districts of Bujumbura accused the security forces of dragging young men from their homes and killing them.

Pouilly said Zeid's office was receiving reports that as many as 200 civilians may have been killed, but stressed it had not been possible to confirm those figures.

"Security forces later on carried out intensive house searches in the Musaga and Nyakabiga neighbourhoods, where they arrested hundreds of young men, allegedly summarily executing a number of them and taking many others to unknown locations," she said.

Last month, the UN documented "452 cases of arbitrary arrests and detentions, 56 cases of extrajudicial executions, 10 cases of torture and illtreatment," she said.

Zeid was quoted as calling on all actors in the crisis to act "to stop this deadly escalation and engage in a meaningful and inclusive dialogue" and for the international community to also do more to restore peace.

"We cannot turn our backs on the people of Burundi at this turning point of their history," his spokeswoman said.

The UN Human Rights Council is to hold a special session on Thursday to debate a draft resolution urging Zeid to urgently launch an investigation into "violations and abuses of human rights" in Burundi.

UN figures released before Friday's violence showed at least 240 people had been killed and more than 200,000 had fled the country of around 11 million since a failed coup in May.

Burundi is still recovering from a 1993-2006 civil war, which pitted rebels from the Hutu majority against an army dominated by minority Tutsis.

Some 300,000 people were killed in the war, which began a year before a genocide of mostly Tutsis in neighbouring Rwanda.