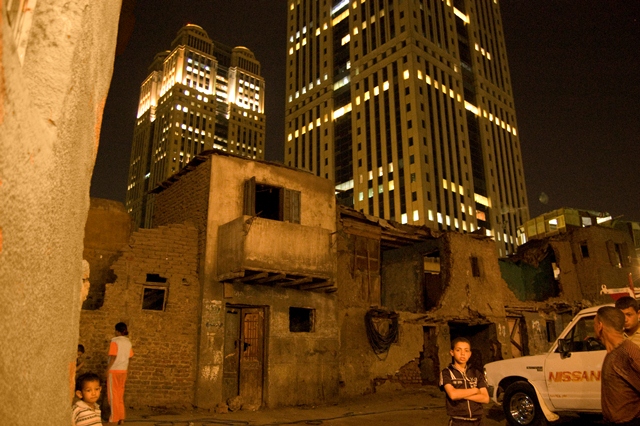 The contrast is stark. On the Nile waterfront, gleaming skyscrapers shoot into the sky, containing a mall stuffed with luxury brands, an opulent hotel, and the corporate offices of some of Egypt’s leading companies.

Behind them, less than 20 meters away, several hundred families live in tiny ramshackle huts without sewage or running water — just a single public pump in the shadow of the tower. Every family lives in fear of forcible demolition of their home and summary eviction on the basis of draconian laws.

The towers in question form the Nile City complex, a partnership between the Egyptian Sawiris family and the Saudi Shokshobi family. The community is known locally as “the shacks.” And now, a decree by the governor of Cairo threatens to evict the residents from their land.

“No sewers, no water, no utilities. This is so that we will feel compelled to sell for a low price,” says Hammad Arabi, a resident of the area.

A few years ago, he says, businessman Naguib Sawiris was offering between LE3,000 and LE6,000 a square meter, but residents wouldn’t accept the deal. They are well aware of the land’s real value, and know that unless they get it, they won’t be able to move even remotely nearby. Many residents are able to produce very old documents indicating ownership or prove that they have established rights to be there.

But, days after the dissolution of Parliament, departure from the shacks seems to be mandatory. The Cairo Governorate issued a decree that ordered police to evict the shack-dwellers from their homes. There is no indication, as yet, of how residents may be re-housed, although Heba Khalil of the Egyptian Center for Economic and Social Rights believes there will be an attempt to relocate residents to the remote outskirts of the city.

“It’s normal that they wouldn’t tell the people in advance of the eviction. They don’t get asked where they want to go. Once such an order is in place, the police could turn up any day, and that’s it.” In the past, such evictions have taken place within a month of the order being issued, but the current volatile circumstances may delay its implementation.

In 1995, Sawiris begun to purchase large portions of land on the Nile Corniche, in the neighborhood of Ramlet Bulaq, then an industrial area. The ownership of the land was unclear, but held in security (a legal classification for property) by the Greek Kaforus family, who were friendly with the Sawirises. The Fass family that was renting the land since the 1960s was unwilling to give up their rights to occupy the land, and Egyptian law granted them certain rights as long-term renters of the property.

But in Hosni Mubarak’s Egypt, power and patronage mattered more than the law. According to a member of the Fass family who spoke to EgyptIndependent on condition of anonymity, when one family member protested to the Cairo governor, he was told that the governor had received instructions from Alaa Mubarak, Hosni’s son, to facilitate
Sawiris’s project. Later, when he still refused to budge, he received a call from a man claiming to be Alaa Mubarak. After that call, he felt compelled to sell his land to Sawiris for well below its proper asking price.

Between 1995 and 1998, the Fass family, with their local connections, put aside their resentment, and helped to facilitate Sawiris’ land purchases. There have been no purchases since then, but according to the family member, Sawiris is still interested in the land. Uncertainty created by the revolution, and the apparent need to consult with his investment partners, have put the project on hold. The houses purchased during this period by Sawiris, roughly a fourth of the area, were demolished. Now the ruins are covered in trash.

Mohamed Hussein Hossam, 51, a microbus driver, received just LE5,000 for his three-room house in the shacks when Sawiris started to acquire the land in the late 1990s. “The conditions were terrible. My mother was ill and old, there were mosquitoes, we had no water,” he explains. He now pays LE600 a month for better housing a few hundred meters away.

Architect and urban planner Omar Nagati estimates the land is worth in excess of LE30,000 per square meter. According to him, ironically, the lack of development in the area is precisely a consequence of its extraordinary value.

“I would speculate that one of the reasons that whoever is responsible is reluctant to provide utilities is because of the ‘Cairo 2050’ vision to turn the whole of this strip into a Dubai-like front. The land is so precious, sitting in the middle of Cairo, on the Nile waterfront, close to downtown, connected to infrastructure, that it has all of the characteristics to be a gold-mine,” Nagati says.

It is in the interests of the officials and developers behind the plan that the residents leave as cheaply and as easily as possible, and, as a result, safe housing and utilities would not only be pointless but counterproductive if the land was to be promptly developed.

At one time, residents would have been deposited in new flats in desert suburbs. “If the revolution did not happen, they would have brought their bulldozers and wiped us off the map. But the revolution came, and this could not take place,” says Walid, a resident.

All residents that Egypt Independent spoke to seemed reluctant to move. There, jobs are scarce, while commuting to central Cairo can take four hours a day and eat up nearly half of a monthly salary. Families who move to the desert often move back into other informal housing.

Just as important as jobs and transport are the community and social bonds, which would be broken up. “People here look out for one another,” one mother says. “We’re like fish,” says an elderly man. “This is our water, and if you take us out of the water then we will die.”

What politicians can do

In the past, says Mohamed Elshahed, an expert on Cairo’s built environment, the government and MPs have backed developers to ride rough-shod over locals. Egypt Independent approached three of the area’s MPs in the week before Parliament was disbanded, to discover what promise democratic politics might hold for the impoverished residents of such valuable land.

Ayman Taha was an MP with the Free Egyptians Party, largely funded by Sawiris. He was a minor official in Mubarak’s National Democratic Party and responsible for relations with local police.

Taha denied that the neighborhoods lacked water and sewage. Despite the fact that his faded image still appears on tattered posters throughout the area, he seemed to have no acquaintance with the needs of the residents, suggesting that two-thirds would be relocated to the outskirts of Cairo and the rest given better housing within Bulaq. He said he could see no reason why some might refuse to leave, “as long as I provide good living spaces for them.” He referred to a plan for the area developed by the Cairo Governorate, but, when asked for a copy, refused to provide one.

Former MP Mohamed Abou Hamed was once a leading member of the Free Egyptians Party, but quit in March, and has recently announced his support both for the dissolution of Parliament and former presidential candidate Ahmed Shafiq. A resident of Bulaq Abul Ela, the greater area, told us that Abou Hamed had begun his election campaign by distributing gifts — “LE20 and a blanket” — but had changed tactics in the face of a backlash against the perceived cheapening of the new democracy.

In contrast to Taha, however, Abou Hamed was aware of the issues in the area, and that residents were unwilling to leave their jobs and community for desert tenements. He agreed that the residents needed utilities, but said that their installation would threaten the current, unstable housing. Abou Hamed claimed that there was a plan developed by the Informal Settlements Development Facility for new, quality housing on the same land. However, it was not possible to verify the existence of such a plan, and the government agency’s initial 2008 report makes no mention of the area.

The former MP from the Muslim Brotherhood’s Freedom and Justice Party, Mustafa Farghali, was blunt: “The government does not have a plan. The only ones who have a plan right now are the investors.” Like Abou Hamed, Farghali is opposed to the forced removal of residents, and describes such proposals as “inhumane.” Farghali revealed that the General Organization for Physical Planning is developing an updated version of the Cairo 2050 plan, Cairo 2052. “Businessmen played a big role in the formation of this plan,” he says, while MPs have not even been allowed to see it. The minister of housing had promised to present the plan to Parliament’s Housing Committee before implementation and seek their consent, but now the value of that promise is unclear.

For Nagati, the urban planner, everything is in flux. “A lot of these redevelopment plans have been completely put on hold, have been frozen, because people are feeling more empowered, more confident, emboldened, to protest. So now we’ll see. Maybe the balance will tip again; a new order will be established.”

*Correction: This article incorrectly stated that Mohamed Elmeshad was an expert on Cairo's built environment. The expert Egypt Independent spoke to was Mohamed Elshahed.