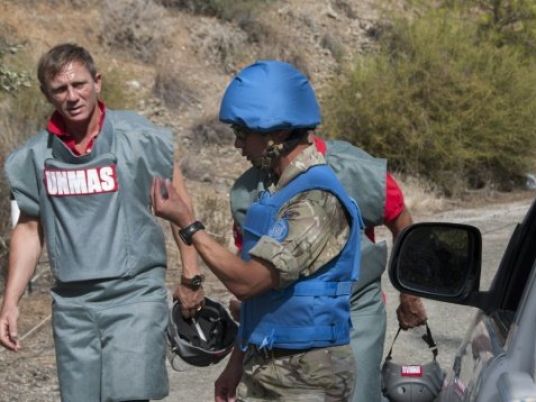 Half a world from home, Cambodian experts toil under a beating sun to demine the Mediterranean island of Cyprus, using skills they honed to help rid their own country of landmines.
It is a slow and painstaking task for the 11-member team employed by the United Nations to clear unexploded mines from the island, divided since 1974 into a Turkish north and a Greek south.
The deminers work in an arid field inside a UN-controlled buffer zone that runs across the east Mediterranean island.
Kneeling under a scorching summer sun, each one meticulously circles his working space with red rope before scooping away dirt with a small spade and sweeping a metal detector across the area.
Over the past decade, deminers have removed more than 27,000 landmines from the buffer zone, with land reclaimed for agricultural use.
Lieutenant Sovannara Leang, who leads the team, is proud to have used his skills to help other countries afflicted by the scourge of landmines since he first joined the UN demining operations in 2009.
His assistant Sous Choom swapped his army uniform for a metal detector in 2000 and was part of a Cambodian team that helped demine South Sudan. Others have operated in Lebanon and Mali.
This week Leang briefed British actor Daniel Craig — the current James Bond — on the team's activities when the big screen super spy visited Cyprus as a UN advocate for the elimination of landmines.
'Inspiring' work
"For these peacekeepers to take their expertise, gleaned over the last 40 years in Cambodia, and make it available to the people of Cyprus, half-way around the world, is truly inspiring," said Craig.
Nearly three decades of civil war has left poverty-stricken Cambodia one of the most heavily-mined countries in the world.
Nearly 20,000 people have been killed there since 1979 and twice as many have been wounded in landmine and unexploded ordnance accidents.
Cyprus "is little compared to what they have had to deal with unfortunately in their country", Major General Kristin Lund, head of the UN Peacekeeping Force in Cyprus, told AFP.
Bernard Bruneteau, a historian at Rennes University in France, told AFP that Cambodia was "systematically mined by all sides" to the conflict after each round of fighting.
"The Khmer Rouge carried out guerilla warfare for a very long time," he said.
According to Leang, many Cambodian deminers are especially good at removing mines because they fought during the war and know where the minefields are located.
"Most of them mined Cambodia," he said.
Deactivation not detonation
Demining operations in Cambodia started in the 1990s with Western assistance.
French colonel Jean-Pierre Billaut was one of those who helped train up to 300 Cambodian deminers during an 11-year mission.
"We taught them the French method that consists in deactivating a mine instead of blowing it up," the now retired officer told AFP.
"It proved to be a good technique. We didn't lose a single finger or leg during our operations!"
Cambodia announced in June it was training an elite squad of rats, imported from Africa, to sniff out landmines and other unexploded ordnance.
In Cyprus, most of the mines were remnants of the 1974 Turkish invasion when hundreds of mines were strewn across the island's battlegrounds.
The demining operation is slowly reaching its end, with 28 minefields in the north of the island yet to be cleared.
The Greek Cypriot authorities revealed their location as part of a peace process to reunify the island relaunched in May.
Turkey invaded and seized the northern third of Cyprus in response to a Greek-backed military coup to join Nicosia with Athens.