In early April 2015, a Czech man named Vít Jedlička declared himself president of a newly founded 7 square kilometer state called Liberland, which is currently being disputed over between the countries of Croatia and Serbia.
He identified the country as a "sovereign state which seeks citizens with an official moto 'To live and let live.'" In a very short time, Jedlička received a lot of positive feedback and his Facebook page garnered over 65,000 fans, most of whom were asking about immigration procedures.
In Egypt, the issue stirred controversy as many people were interested in immigrating to the new country. The Egyptian Foreign Affairs Ministry responded to the sudden interest in Liberland by stating it does not recognize this country. It put out a press statement urging citizens to refer to the ministry for any travel or immigration information.
A ministry spokesperson says he has never heard of a place called Liberland, warning Egyptians of fraud in the immigration process.

The Liberland flag on its Facebook page
Claiming land: A new trend?
This is not the first time a self-proclaimed state has emerged. In 2014, Jeremiah Heaton, an American, moved to Africa and declared a kingdom of his own in an uninhabited 2,060 square kilometer desert sandwiched between Egypt and Sudan called Bir Tawil. He wanted to make his seven-year-old daughter's dream of being a princess come true.
At first, Heaton researched Antarctica because of its large open spaces, but his search proved fruitless due to the Antarctic Treaty. After extensive research on the Internet, however, he found the Bir Tawil desert a suitable place to establish his own kingdom. Heaton made a crown for his daughter and asked friends and family to refer to her as Princess Emily.
Speaking to AFP, Edward Swaine, a professor of law at George Washington University Law School in Washington D.C., discussed Heaton's drastic move to the desert. "At a basic level, he has to be correct in asserting that this is unclaimed land… It's not obvious to me that he's correct."
He added "Beyond that, he has to establish effective occupation of this land beyond simply planting a flag or showing up and taking a selfie."
Heaton reportedly returned to the United States after taking a selfie in his desert kingdom. 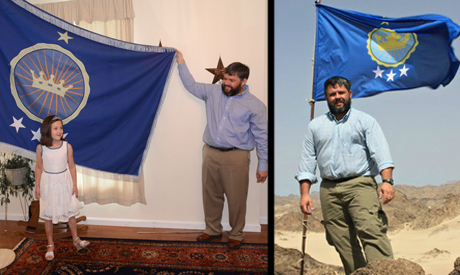 Jeremiah Heaton and his daughter Emily along with flag representing their new kingdom on Bir Tawil
Photo by: AFP
But the question here remains: can anyone build a kingdom on foreign land?
"There is no single article in international law that allows a person to claim foreign soil in such a way," Mohammed Barhoma, an expert in foreign affairs, told Egypt Independent.
"There are many disputes between countries over border lands, which could technically allow anyone to illegally establish a new country. This scenario could continue to repeat itself, which would be absurd."
With regards to Egypt, Barhouma said there are many areas like Bir Tawil that are being disputed. Rafah city, for example, is located between Egypt and Palestine. The city of Halayeb and Shalateen is located between Egypt and Sudan. Despite being declared an Egyptian city, it was still considered a Sudanese city when elections were recently held in Sudan.
"There was also neglected land between Egypt and Libya where neither country claimed it as their own," he pointed out.
Barhouma recommends the United Nations sign new treaties between bordering countries to set new demarcations, depending on latitudes and longitudes, to end this phenomenon.
Despite being an impossible dream, these attempts to plant flags and create new states will most-likely continue to inspire people hoping for a different life within troubled times.