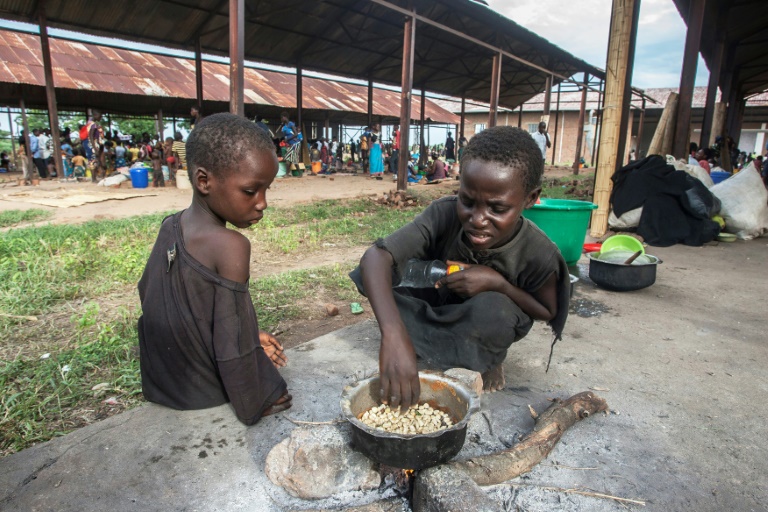 “We just sleep on the floor in the tents,” said 28-year-old mother-of-five Mary Amidu who like thousands of other Malawians fled her flood-ravaged home.

“It’s a camp, so the situation is dire. You just find a small space in the tent with your family and make it home.”

Her village is just ten kilometers (six miles) away on the Mozambique border, beside the west bank of the Shire river which has burst its banks following days of torrential rain.

The waters last week invaded her home so swiftly that the young widow had to scramble to get her family to safety.

“The floods came very quickly and we had no time to rescue anything. Most of my property went with the floods,” she said. “What was important was to save lives.”

They are now at the emergency camp, located in Bangula, southern Malawi — close to the border with Mozambique, which was hit by tropical cyclone Idai late Thursday, cutting off the coastal city of Berea.

“Although we have food, we have no cooking utensils to prepare the food because everything was lost,” said Amidu who said she fears a long stay at the camp as waters begin to subside.

“We cannot go back soon because the water has not receded and so the house has been destroyed. So we will hang around the camp until the situation normalizes. We have no other choice.”

Pilirani Andulu walked 15 kms to the camp after her home collapsed and has been forced to sleep in the open with her two-year-old girl because the tents are full.

A lack of blankets and mosquito nets means her child is exposed to mosquitoes, malaria and cold.

Relief official Humphrey Magalasi has been battling to ensure the 21 camps opened to handle the crisis can keep up.

“We have huge gaps in terms of resources such as food and non-food items,” he told AFP. “What we desperately need right now is food, tents, medication and mosquito nets.”

As many as 1,700 households had settled at the Bangula camp as of Thursday.

So far, the Department of Disaster Management Affairs has received just 5,000 bags of rice, supplied by China.

At Bangula airfield, Magalasi has also been dispatching food and emergency supplies to areas cut off by flooding including Makhanga, 65 kms from Bangula.

‘Accessible by boat or by air’

“We are airlifting supplies to Makhanga where about 2,000 households have been affected,” he said.

“Due to the flooding, the area is only accessible by boat or by air. We intend to airlift 600 bags of rice and other non-food items to Makhanga.”

At least 56 people have died in flood-hit areas as of Wednesday, according to the government, while 577 had been injured and three are missing.

“Most of the displaced families are living in camps. So far, a total of 187 camps have been established in the affected districts,” said the government in a statement.

“Assessments to establish the extent of damage in all the 14 affected districts (of Malawi’s 28) are still underway.”

The floods also caused heavy damage to property, including roads and crops which forced President Peter Mutharika to declare a state of disaster.

An AFP correspondent saw extensive damage to fields of corn, also known as maize, around Bangula. The destruction could potentially wreak havoc with the harvest due in April and May.

The country’s Department of Climate Change and Meteorological Services has warned Malawians to expect further downpours.

In southern Africa, an illusion built on aid heralds hope and hunger