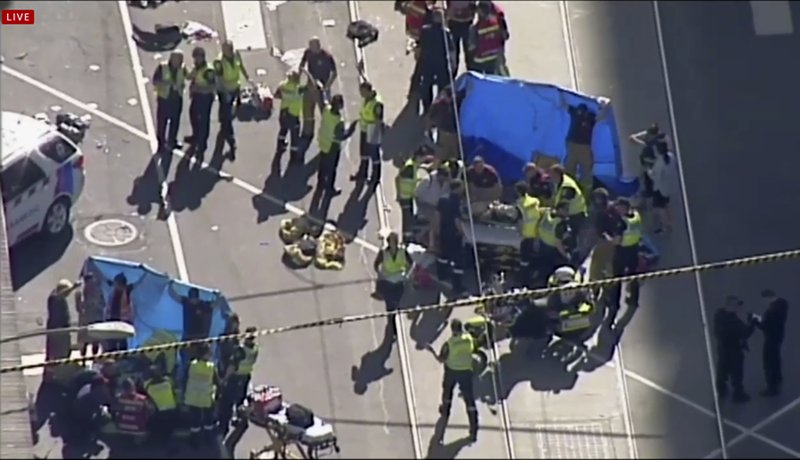 Two men were arrested after the car in which they were travelling crashed into pedestrians on a busy central Melbourne street Thursday, leaving up to 19 people injured.

Victorian state police said in a statement the driver of the vehicle and a second man were in police custody after the incident, which occurred on Flinders Street in the city’s central business district just after 4:30 p.m. when the area was busy with Christmas shoppers.

The motive of the incident was not clear immediately. Sky News Australia reported the driver of the white Suzuki SUV was wrestled to the ground and handcuffed after his vehicle crashed into a bollard by a cable car stop.

Media reports said 13 people have been taken to hospitals, including a pre-school aged child in serious condition with head injuries.

Witnesses told Sky News the car ran a red light, speeded up and struck pedestrians, in an area with a 40-kilometer (25-mile) -per-hour speed limit.

“As it [the car] approached this intersection … it just mowed everybody down, people were flying everywhere,” one witness who identified herself only as Sue told radio station 3AW.

Police said in a statement they had “saturated the … area in the vicinity of Flinders, Elizabeth and Swanston streets to ensure community safety.”