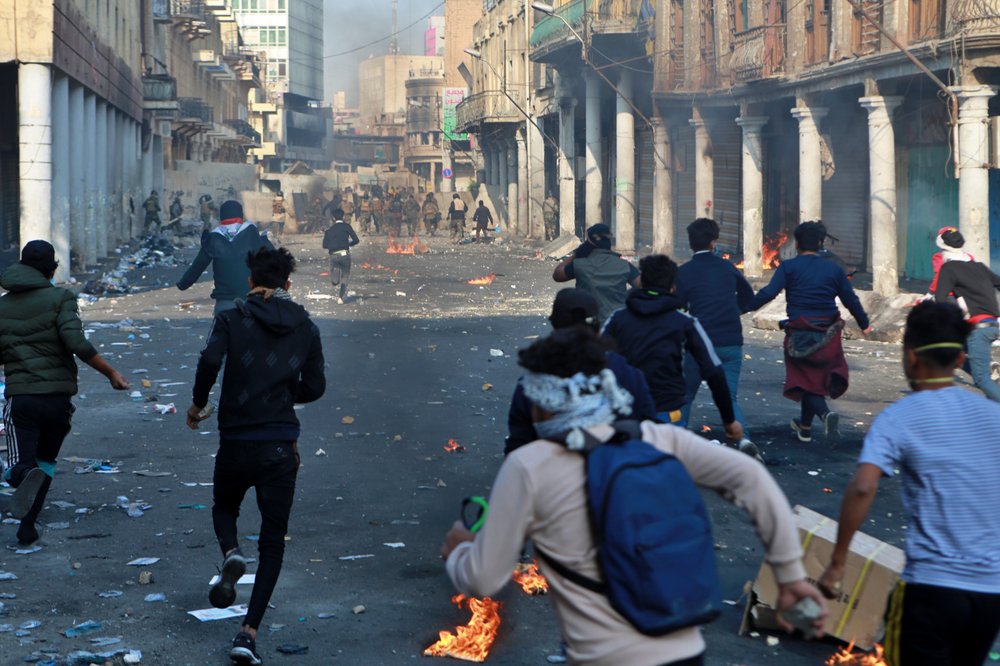 BAGHDAD (AP) — When discontented Iraqis sought independence from British occupation in 1920, Baghdad’s most prestigious new boulevard, Rasheed Street, was the theatre of their revolt. Nearly 100 years later, the historic colonnade-lined avenue is a flashpoint in Iraq’s grassroots movement waving the banner of revolution against the country’s political system.

Once a bustling cultural hub in the heart of Baghdad, Rasheed Street has been a battle zone in recent days as security forces try to repel protesters. At least seventeen protesters have died, as Iraqi authorities used live fire, tear gas and rubber bullet to repel them from advancing beyond a concrete barrier which has effectively cut the street in half.

Protesters see Rasheed Street as key to protecting the nearby squares that are the epicenter of their movement, including Tahrir Square, where hundreds of demonstrators are camped.

But experts are concerned that damage from the fighting will reverse painstaking efforts to keep the street from falling into ruin.

“We are losing our heritage,” she said. “But it’s hard to make this argument to them, because the loss of human blood is more precious.”

The bloodshed marks the most recent escalation in near daily street violence since Oct.1, when thousands of protesters, mostly youth, took to the streets to decry corruption, poor services and scarcity of jobs despite Iraq’s vast oil wealth. At least 340 people have died in the security forces’ crackdown since the unrest began.

Rubble is littered along the street, and scorched buildings stand precariously. Balaclava-clad youth regularly scale the wall of concrete slabs that divides the street and goad security forces on the other side. Blood is splashed across a column covered in cracked paint.

“Rasheed Street is important to us because we have to protect the area around Tahrir Square,” said Mustafa al-Maliki, a 22-year-old protester who arrived at Rasheed Street one morning this week with a group of young men.

The violence is only the latest chapter in the avenue’s storied past. It was here, in 1958 that Crown Prince Abdul Ilah’s dead body was dragged and cut to pieces in a coup d’etat lead by Gen. Abd al-Karim Qassim, bringing an end to the monarchy. The following year, Qassim, then prime minister, was traversing the street when he narrowly avoided death in a botched assassination attempt orchestrated by a young Saddam Hussein.

“It was always the center for Iraqi demonstrators,” said Saadoon al-Janabi, the author of a recent Arabic-language book about the street, “from World Wars I and II, to today.”

The street has witnessed some of the most important political events in Iraq’s history, he added.

Rasheed Street was the first straight, modern avenue in Baghdad’s old city, built in 1916 by the Ottomans to be a military road running north to south parallel to the Tigris River. Named after the 5th Abbasid caliph Haroun al-Rasheed, it provided easy access to docked ships carrying supplies for the barracks. To entertain officers stationed in the garrison, cafes and cinemas were also built, said al-Janabi.

After British forces captured Baghdad in World War I, Iraqis and former Ottoman soldiers in 1920 held protests and rallies on Rasheed Street which eventually spiraled into an armed revolt across the country. The next year, the British-backed monarchy was installed and British troops took over the nearby military base, expanding Rasheed Street to span four strategic bridges and squares.

That is why the street is significant, said urban planner Taghlib AbdulHadi al-Waily. “It’s not just what’s inside it, it’s what surrounds it.”

The protesters know its value: They currently occupy three of the four bridges — Jumhuriya, Sinak and Ahrar — in a standoff with security forces.

Nightclubs, orchestras and beauty contests were among the novelties the British introduced to Iraq. As Iraqi musicians flourished, and cafes resounded at all hours, modernist homes were built in the 1940s and 1950s fitted with striking wooden engravings and precious stone. A frequent site of daily clashes today is an old import-export building known as Beit Lynch, named after a British Empire representative, the only edifice on the street with arches.

As an adolescent, al-Waily strolled daily down Rasheed Street on his route home. By the 1980s the avenue was losing its luster, falling into neglect amid successive wars and sanctions and, later, the U.S. invasion of 2003. Buildings crumbled.

“Now it’s a backstage of wholesale markets, loading and unloading decks, not the real hub where Iraqis can derive their identity,” he said.

He looks to the vibrant center created by protesters in Tahrir square with a sense of irony. “They created what was missing in their city,” he said. “That was supposed to be the role of Rasheed Street.”

Al-Waily developed a plan to revive the street but, he said, “there was no political will to implement.”

Mustafa, the project manager for Lugal, came close. By 2017 she managed to convince the government to form a committee with representation from eight ministries. The first step was to develop studies to assess the state of Rasheed Street because official databases were either outdated or didn’t exist.

“But we got lost in bureaucracy,” she said.

Part of the problem was overlapping authorities. Because 20% of Rasheed Street is categorized as a heritage site the Culture Ministry argued that providing building permits was within its jurisdiction; the Planning Ministry disagreed. “We got nowhere,” said Mustafa.

Then came the mysterious fires. Buildings protected by heritage laws suddenly burned down, the culprits never caught, and building permits were promptly handed out for new high-rises. This happened to a church and synagogue, al-Waily said.

“There are people who have an agenda to demolish these buildings for profit,” he said. “I’ve been fighting this for 10 years.”

Back on Rasheed Street, the young protesters are fighting a different war.

Step back, said one youth. “The shooting will start soon.”

Tuktuk, newspaper of Iraq's uprising, aspires to be vehicle for change

From Mosul to Baghdad, a song of Iraqi solidarity and resistance